Nearly a year after a rain-saturated retaining wall collapsed, tossing trees, cars and half of a Baltimore street into a railway ravine below, completion of the 26th Street rebuild is expected to linger into late May.

With all major infrastructure done, including a handsome new wall of poured concrete molded to look like stone, the unit block of East 26th Street will emerge with new street lights, wider sidewalks, decorative brick work and freshly-planted trees.

Residents of the block’s brightly-painted Victorian rowhouses, who have endured months of heavy construction outside their front parlors, will soon return to the pre-collapse status quo of living on a quaint and quiet street in Charles Village.

It was last April 30, at 3:45 p.m., when the century-old railway retaining wall began to writhe and shake, acting as if some sci-fi creature were trying to break free from the ground below.

Moments later, the entire wall gave way. Tons of earth, rock, trees, paving material and nearly a dozen cars toppled into the CSX railway line 30 feet below the street. The collapse took just seconds and sounded like an earthquake, a bystander told The Brew.

Miraculously, no one was injured.

Only an hour earlier, students from the Margaret Brent Elementary/Middle School had skipped and walked and lugged their book bags along the now-vanished sidewalk. Busy St. Paul Street, its western flank lying less than 30 feet from the ruined wall, was unscathed. 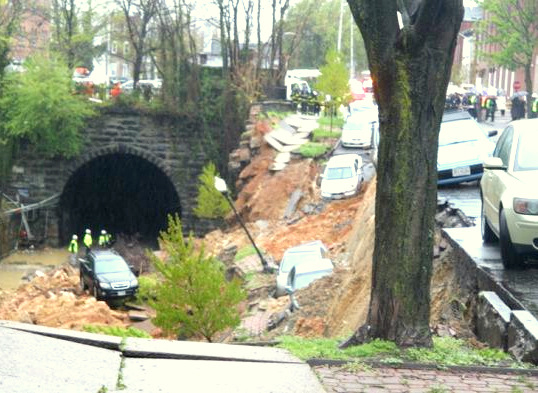 Cars parked along 26th Street wound up buried in the railroad cut. (This picture taken on April 30, 2014 shortly after the collapse by Fern Shen) 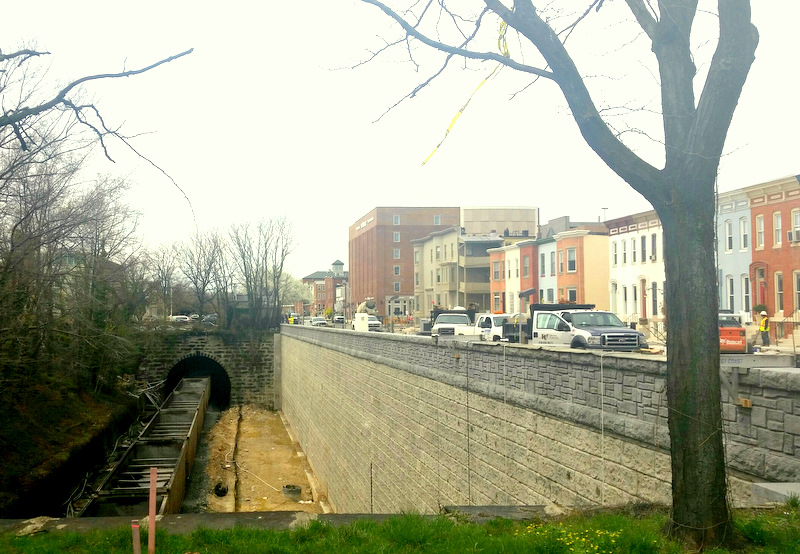 A new retaining wall separates 26th Street from the CSX rail line below. (This picture taken on April 15, 2015 by Mark Reutter)

The immediate cause of the wall’s failure was attributed to “epic rain events.” In the previous two days, more than 5 inches of rain had fallen in Baltimore. Residents said cracks and dips appeared in the roadway during the rains, while the sidewalk next to the retaining wall had visibly buckled.

But there were signs of the street’s structural distress long before the rains. For 12 to 14 months “citizens repeatedly reported soil erosion, settlement, potholes, sidewalk caving and similar conditions along 26th Street” to city officials and CSX Transportation, a four-page post-mortem of the collapse by the Department of Transportation subsequently confirmed.

The complaints were funneled through the bureaucracy. Transportation employees responded with maintenance inspections and quick fixes (filling in the cracks and potholes with asphalt), and referred the complaints to the Department of Public Works. DPW examined the water and sewer lines under 26th Street and concluded they were fine.

CSX inspected its right-of-way below the cut and, also finding it to be fine, told residents that “the city was the appropriate party for the complaints,” according to the August 2014 report.

The report added these observations:

• “There was no engineering survey performed on the wall or failing sidewalk by DOT or CSX.”

• “Personnel from the city and CSX who performed visual inspections were not licensed Professional Structural or Geotechnical Engineers.”

• “There should have been more coordination by CSX and the city. . . to determine why the sidewalk and adjacent curb and roadway were under distress.”

The report concluded that the cause of the collapse was indeterminable. “While we look at available information and discuss possible scenarios, the definite conditions which ultimately caused the collapse remain inconclusive due to the lack of exploratory information which may not become available even during extensive excavation of the failure area during the reconstruction phase.”

Laying immediate blame on heavy rains and a harsh winter, DOT said it would hire consultants to perform structural inspections of infrastructure along the CSX right-of-way “with a goal of prioritizing areas of concern within the next 12 months.”

Even before the wall collapsed, one area of concern was the deteriorating condition of the Sisson Street Bridge over CSX in nearby Remington. DOT has not yet announced whether it has completed the structural inspections.

At the time of the incident, the Rawlings-Blake administration was preparing to include a $350,000 expenditure for rehabbing 26th Street in its 2015 budget.

The money was to go for the “excavation and rehabilitation of the sub-base material on the roadway” and for “necessary repairs to walkways,” according to the collapse report.

The city has since spent many times that amount fixing the damage and rebuilding the road. The latest estimate is $15 million, Budget Director Andrew W. Kleine told the City Council last month.

This includes $11.98 million awarded to Concrete General Inc. in a no-bid contract last July by the Board of Estimates as well as design work by Whitman, Requardt & Associates and such budgeted incidentals as $500,000 for “flagging” CSX freight trains that resumed operations days after the wall failure.

One reason for the project’s high cost (and lengthy period of construction) was the need for a temporary wall to shore up 26th Street and protect residential buildings and city infrastructure from further deterioration.

The temporary wall was replaced by the recently completed permanent wall, reinforced by deep steel pilings, on the south side of 26th Street.

No Payments from CSX

CSX agreed to contribute “up to 50% or $10 million to the cost of the repairs” and further to share “the costs of any and all third-party lawsuits relating to the event,” according to a memorandum of understanding released by the city last August.

This would indicate an amount due of about $7.5 million, which would reduce the cost to taxpayers by an equal sum.

So far, CSX has not made any payments, Kleine told the City Council, and he did not know when payments might be expected.