It doesn’t take much for delinquent water customers to get in trouble under Baltimore’s new get-tough policy aimed at tackling a reported $40 million backlog of overdue accounts.

About 600 residential customers a week – with water bills averaging $500-$600 in arrears – are having service cut offs, according to the Department of Public Works, to pressure them to pay their bills.

What, then, to make of an overdue water bill of nearly $17,000 that the city, essentially owes itself, but no agency has claimed?

Account number 09447517005 shows $16,766.26 worth of water never paid for. The Brew discovered the outstanding bill, and its service turn-off date of March 20, while researching a story on water bills.

The bill is something of a mystery.

It would appear to be for the city-owned recreation center building (now closed) at 2601 Tolley Street in Morrell Park in Southwest Baltimore.

But when contacted on Friday, Rec and Parks told The Brew it’s not their bill.

Rec and Parks spokeswoman Arli Lima said the agency’s fiscal department “conducted a little research” and found that “account #09447517005 was established in 2012 and registered to Mayor and City Council.” 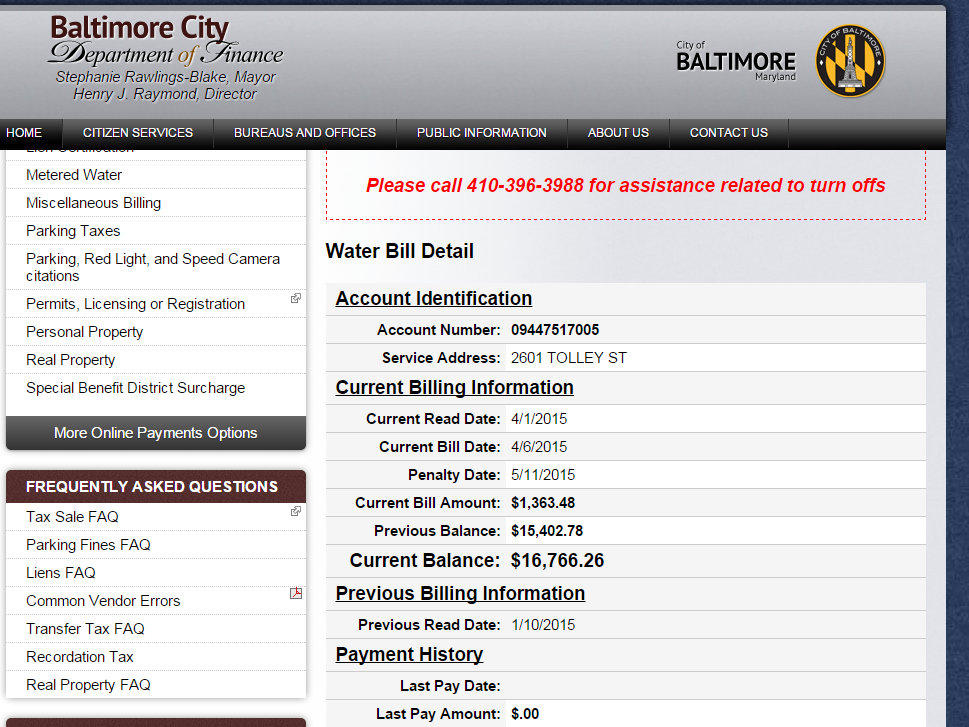 The account “belongs to an elementary school (it does not say which school it belongs to),” Lima said.

When asked why a school’s water bill would use Rec and Park’s headquarters building in Druid Hill Park as a billing address, Lima said, “This sometimes will happen with recreation centers that are adjacent to schools.”

But in this case she added, “the previous Rec Center was located directly across the street from the school, and it shared the same address so that may have been the error/issue.”

Jeffrey Raymond, spokesman for the Department of Public Works, could not confirm that the account was associated with a school.

So The Brew contacted City Schools.

Edie-House Foster, City Schools spokeswoman, said upon their own investigation, the school system concluded that account  09447517005 wasn’t their responsibility, either. 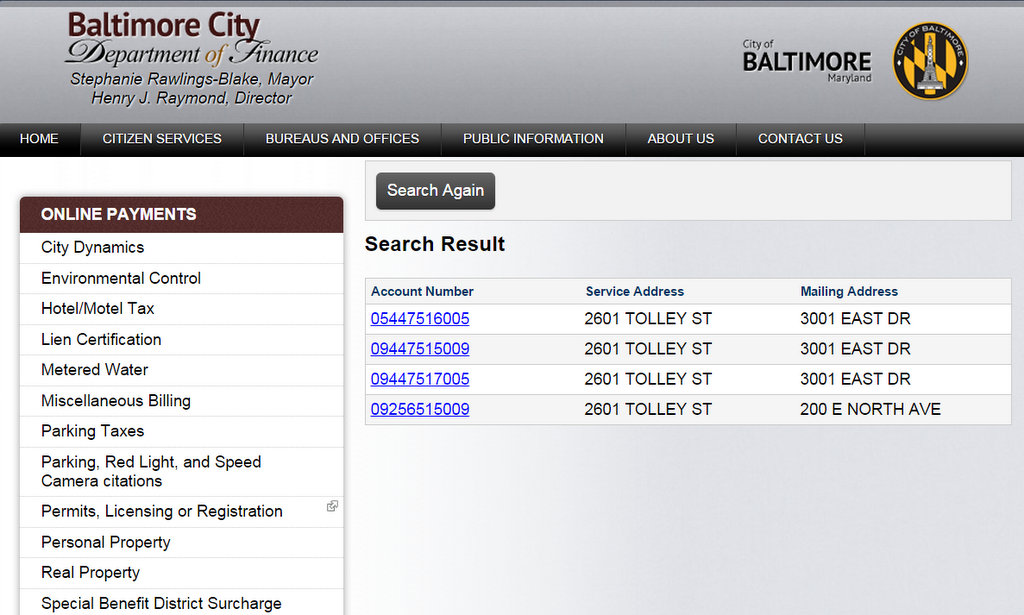 Screen grab of account 09447517005 with a mailing address of 3001 East Drive, the headquarters building of Rec and Parks.

But the school has its own water bill account with a payment address of 200 East North Avenue, the City Schools headquarters.

How city agencies pay their water bills to DPW is a somewhat obscure process.

Raymond, for example, would not provide details on which city agencies are behind on their water bills – and what, if any, are facing potential cut-offs for nonpayment.

He did say that “city agencies have budget account numbers for their water bills that are used to seamlessly make payments” and ”generally speaking, the funds are transferred automatically each quarter.”

He said DPW was investigating the bill, as it would with any other delinquency.

“If there is a property that does not have a budget account number, we work with the property owner to make sure it is brought into compliance.”

He did not say whether water was cut off to the service address; however, the account’s current “bill date” is April 6, 2015, indicating that the account is still in service.

When asked under what circumstances a city agency (presumably on an automatic transfer payment system) would not pay a series of water bills, Raymond replied, “This one is out of my lane.”

To make matters more confusing, two rec center buildings are associated with that address, according to Rec and Parks’ web site.

One  is the old Morrell Park Rec Center (now Morrell Park Annex) that, on a recent visit, was closed and shuttered.

The other is the new Morrell Park Rec Center.

The city opened the attractive new building last July, the first new rec center built in the city in more than a decade.

Even though Rec and Park’s website lists the new center’s address as 2601 Tolley, the accurate address, which is on the front of the new building, is 2651 Tolley.

Asked if Rec and Parks had set up one for the new recreation center, Lima said on Friday. “I’m not sure, I emailed our Fiscal Dept. I’ll fill you in when they respond.”

We asked again this morning about the 2651 Tolley account – could it be the new center that owes the $16,766 water bill?

Lima, who said she was still checking on whether the new center address had a water bill account, said “No, I don’t think so.”

“That account number you gave me is for the school,” she maintained, “so I don’t think the new Rec Center water bill would be $17,000 in arrears. But I will ask.” 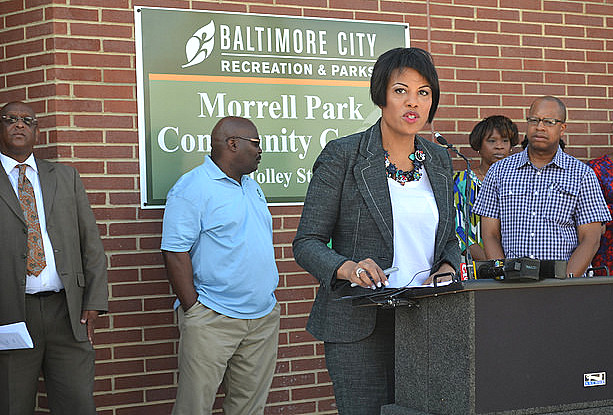 Mayor Stephanie Rawlings-Blake speaks at the dedication of the new Morrell Park Rec Center in July. (Photo by Recreation and Parks)