Maryland’s new transit chief will be a career government and transit official who has also worked as a radio personality, Paul W. Comfort, a Queen Anne’s County commissioner.

Maryland Transportation Secretary Pete Rahn is expected to name Comfort today as Maryland Transit Administration’s CEO a week after Robert L. Smith was quietly ousted. News of his appointment was first reported in The Daily Record.

Comfort, 49, will take over the troubled agency that runs Baltimore’s bus system as well as MARC commuter service next month.

He previously served as a director of operations for MV Transportation, a Dallas-based private transit company, where his responsibilities included overseeing the Washington Metropolitan Area Transit Service’s MetroAccess Service. 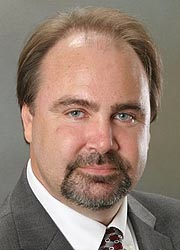 “No wrongdoing of any kind occurred,” the county’s human resources director Stephen Brayman told the Post. “It’s not uncommon for boards to want to go a different than an executive.”

Comfort’s  tenure in Charles County was described as controversial, with a management shake-up he initiated leading to the departure of 16 senior staff. Budget battles and resistance to an employee unionization effort also made headlines.

Before entering county government, Comfort was a vice president of national contracts and a general manager at Yellow Transportation from 1998 to 2003, according to his online resume. He also worked as a marketing manager for Laidlaw Transit Services and as transportation coordinator for the Queen Anne’s County Department of Aging.

Between 1986 and 2002, Comfort was a part-time local radio personality, with a show on WCTR-AM focusing on Queen Anne’s County news called “Comfort’s Corner.”

A Kent Island native with a law degree from the University of Maryland School of Law, Comfort was the 2002 Republican Party candidate for State’s Attorney.