After disclosing the uncertain future of the award-winning Mattin Center on Johns Hopkins University’s Homewood campus, writer Edward Gunts received this response from the architects who designed it, Tod Williams and Billie Tsien.

Gunts had reported in The Brew that university president Ronald J. Daniels is planning to re-configure the space along Charles Street above the Art Museum Drive intersection for a $100 million student union. Here is the architects’ emailed reply to Gunts:

When we won the competition to design the Mattin Center in the late 1990’s the City of Baltimore was a much tougher, more dangerous place. A student, a musician, had been recently killed in a wooded section of the proposed site.

So the University chose our design over the two others in part, because they wanted a protective environment for students to pursue their artistic interests which at that time, were considered extracurricular.

The administration was concerned about the physical security of the students. The suggested program was not so large and that allowed us to organize spaces such as a black box theater, artist studios, dark room, music practice rooms, dance studio, rehearsal spaces, and student offices around a large exterior courtyard at the heart of the site.

A Retreat for Students

This building was the result of an international competition where three finalists made design proposals. In our entry we approached the project in much the same way other urban campuses do: Columbia, Harvard, Yale all define academic life as adjacent to yet still a haven from the intensity of urban life. Physically and programmatically the Mattin Center was a retreat both from the academic grind of the University and from the streets of the city.

We created a gateway from Charles Street and we set our buildings low to extend views from the Beach (as you know, the nickname of the sloping lawn on the east side of the MSE library) to the South.

We proposed a gateway link to the garden of the Baltimore Museum of Art, thus connecting the two institutions. Another competitor, Heikkinen Komonen of Helsinki, proposed a much more open building that set the theater on Charles along with considerable glazing. It might be interesting to review the three proposals.

We understand that today Baltimore is a different place and that the administration, students, and their needs have changed. Today there is a desire to create a more direct connection to the city and for more socializing spaces for students. The site of the Mattin Center is an important one for the University and campus, and we believe it can accommodate additional density and change.

While we would have very much welcomed being part of the discussion to rethink this area of campus, we can understand that the new administration and student body wanted a different approach. This is unlike the MoMA issue where a cultural institution seemed to deny its mission as a protector of art, architecture and design.

If the administration elects to demolish the Mattin Center, it should not be without very serious debate. We are concerned, not so much because of our project or egos (though it would hurt since we believe in and are very proud of our work), but because to do so is unimaginative, and unsustainable, and because it does not acknowledge the layers of history that are crucial to an understanding of our culture, our campuses and our cities. 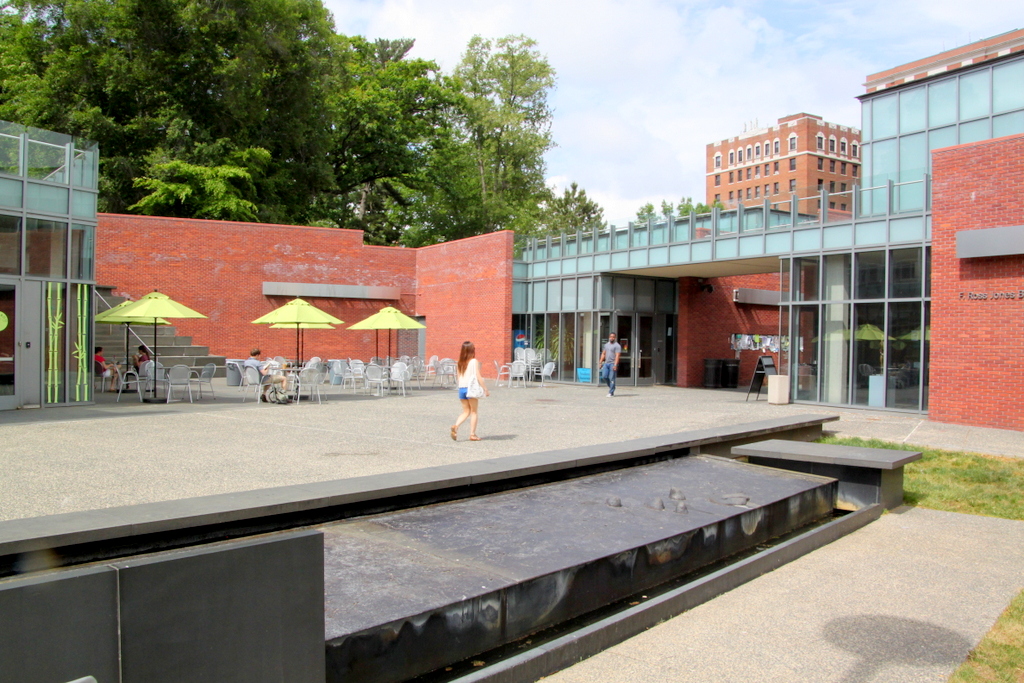 The Mattin Center’s central courtyard, including cafe tables and a water fountain that was not functioning on that day. (Photo by Fern Shen)