The federal General Services Administration has announced that next month it will begin the process of auctioning off the Metro West complex, the former offices of the Social Security Administration on the northwest fringe of downtown Baltimore.

While this may seem like a routine disposition of surplus federal property, both the size and location of this site makes it of critical importance to the fate of the “Freddie Gray neighborhoods” of West Baltimore that exploded in civil unrest last month.

Two years ago, we advised readers and City Hall to forget about glitzy Harbor Point – or remember that it is just a peninsula – and concentrate on envisioning how Metro West could be used to jump-start the economically devastated Westside.

Twenty months and one riot later, the Westside is in even more dire shape and the city has made no known progress in crafting a plan for repurposing the massive facility, which was abandoned by SSA last year for new facilities in far northwest Baltimore. 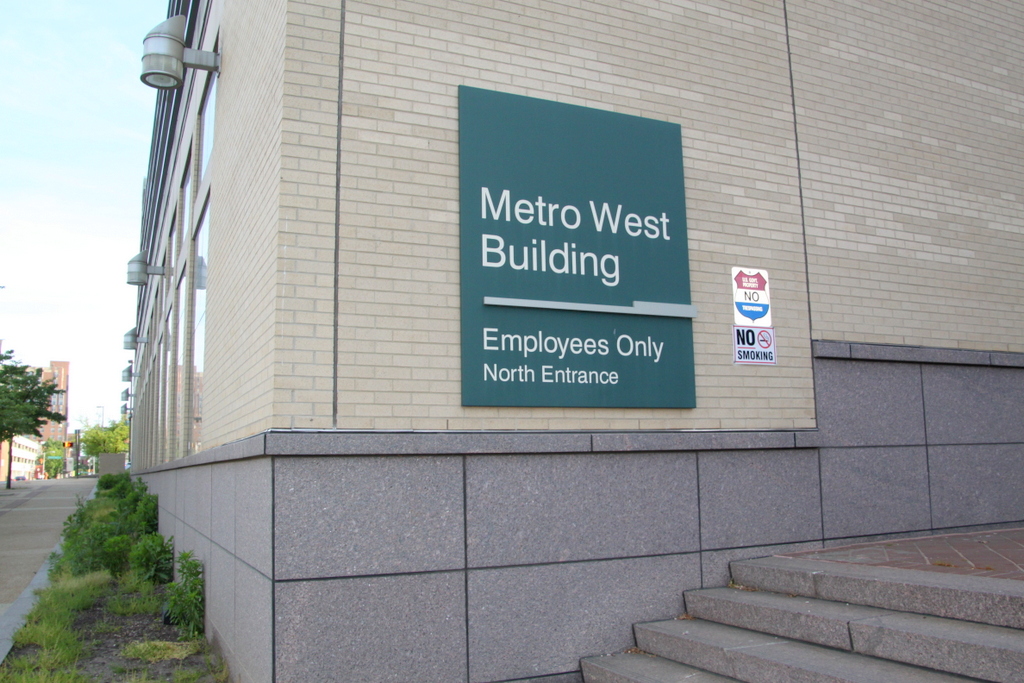 North entrance of the now-vacant building. (Photo by Fern Shen)

The planning vacuum created by City Hall inaction has allowed the GSA to proceed with a plan that, if successful, is liable to saddle the city with a real estate albatross for decades to come.

Selling off 1.1 million square feet of office space to a private developer will almost inevitably lead to “land banking” the property amid glorious hype about redevelopment that we have heard far too often before.

Then will follow years of stalled progress and/or extortionist deals as the city struggles to work with developers who have the upper hand. (We have seen the ruins of chronic ongoing delays at “Superblock” on Howard Street and, more recently, Poppleton in West Baltimore.)

Like it or not, by owning the site, the GSA bought into the problems in the surrounding area. The feds shouldn’t be allowed just to walk away.

The homeless camp that has grown up just west of the site, on the desolate backside of Martin Luther King Boulevard under the “Highway to Nowhere,” spotlights the socioeconomic ills that have befallen the area through neglect and isolation.

Across from the homeless camp is a Rite Aid Pharmacy that was burned out in the recent riot. Rite Aid says it will rebuild the store. That’s a promising start. 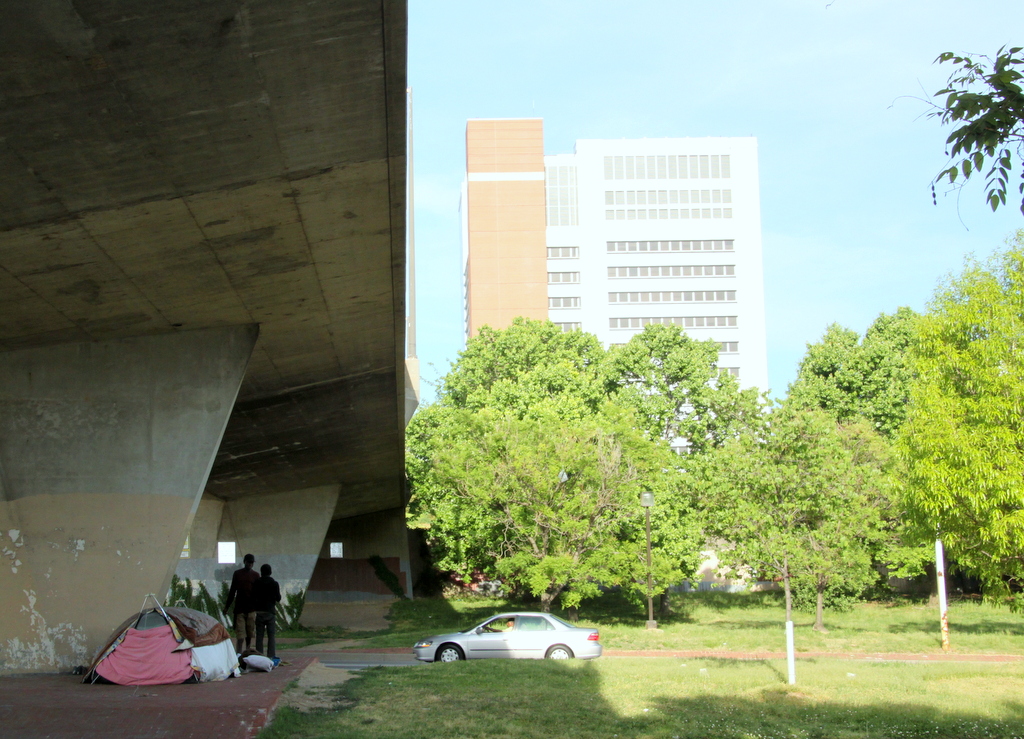 Tear Down the Barriers

• Eliminate the “Highway to Nowhere.” Metro West was completed soon after the 1.5 mile highway fragment was pushed through West Baltimore in the 1970s. Straddling a wide grassy ditch, it remains the only thing that’s ever been built in this corridor. 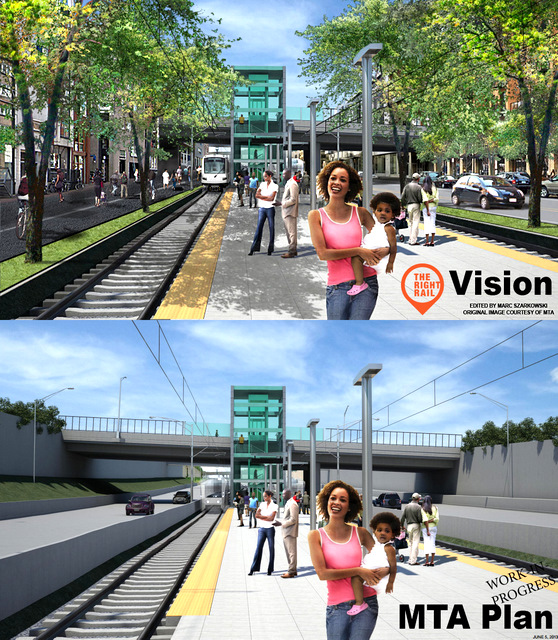 The MTA Red Line plan (bottom) would encase their proposed light rail line inside the “Highway to Nowhere.” Marc Szarkowski edited the MTA rendering (top) to show how the highway could be replaced by new multi-level development and a greenway inside and around the existing “ditch.”

The highway has been closed many times for repairs with negligible negative traffic impact, so it can easily be closed permanently. Portions of the right of way can be incorporated into the local street network with sidewalks, bike lanes and access points to become frontages for new development.

• Create a local street grid. The grid from the University of Maryland Baltimore to the south, and from Franklin-Mulberry to the east, must be carried through the site to eliminate the “superblock” barrier effect. In particular, Pine Street from UMB would make a great street to integrate Metro West with the north and northwest.

• Subdivide the 11-acre Metro West site into smaller development parcels. New development must be phased. All the eggs must not end up in the same development basket. Some of the site frontage could be oriented to MLK Boulevard to breath new life into that oppressive artery.

These proposals will not be inexpensive. They should be paid for out of the value of the Metro West site and from interstate highway trust funds in the case of the Franklin-Mulberry spur.

The feds own the site and paid for 90% of the destructive highway with interstate funds. It’s their obligation.

City Hall needs to wake up – and U.S. Rep. Elijah Cummings, Sen. Barbara Mikulski and the rest of Maryland’s congressional delegation must put the brake on the auction – before it’s too late.
________________________
Gerald Neily was transportation planner for the Baltimore City Department of Planning from 1977 to 1996 and has been a consultant before and since.