Several hundred people turned out on a hot, sunny Saturday to hear Martin O’Malley stump for a populist version of the American Dream and for his own long-nurtured dream of getting to the White House.

From the top of Federal Hill Park, the former Baltimore mayor and Maryland governor made it official – announcing his decision to seek the Democratic nomination for the presidency of the United States.

Overlooking the sparkling Inner Harbor, the icon of the city’s redevelopment, O’Malley’s backdrop was the image most of America has associated with Baltimore. It’s the urban idyll challenged mightily by the images of Baltimore the world saw for days recently, of 25-year-old Freddie Gray’s arrest caught on video and the ensuing protests, fires and riots that followed Gray’s death.

Considering the candidate’s upbeat message, though, the beautiful spot was right on point.

“Whether the American dream becomes a lie, or becomes an ongoing truth that our children can enjoy. . . can build upon,. . . can live. . . is really up to you and me. It is up to all of us.”

“He Had Our Backs”

Before the campaign kick-off kicked off, the local Kelly Bell Band established a mellow vibe, giving a 40-minute concert consisting mostly of blues with a bit of AC/DC and Ozzy Osbourne thrown in.

Protesters who had planned to picket the event decided not to, opting for other activities and locations today. Demonstrators were not allowed to bring signs, though a few small ones popped up such as “Stop Killer Cops.” But the crowd by and large awaited the speech placidly, chugging bottled water and standing in full sun.

Dozens of supporters got things rolling, walking out on the stage holding the campaign’s “O’Malley, New Leadership” signs. Several spoke about how O’Malley’s actions as a governor – and before that mayor and city councilman – had helped them over the years. 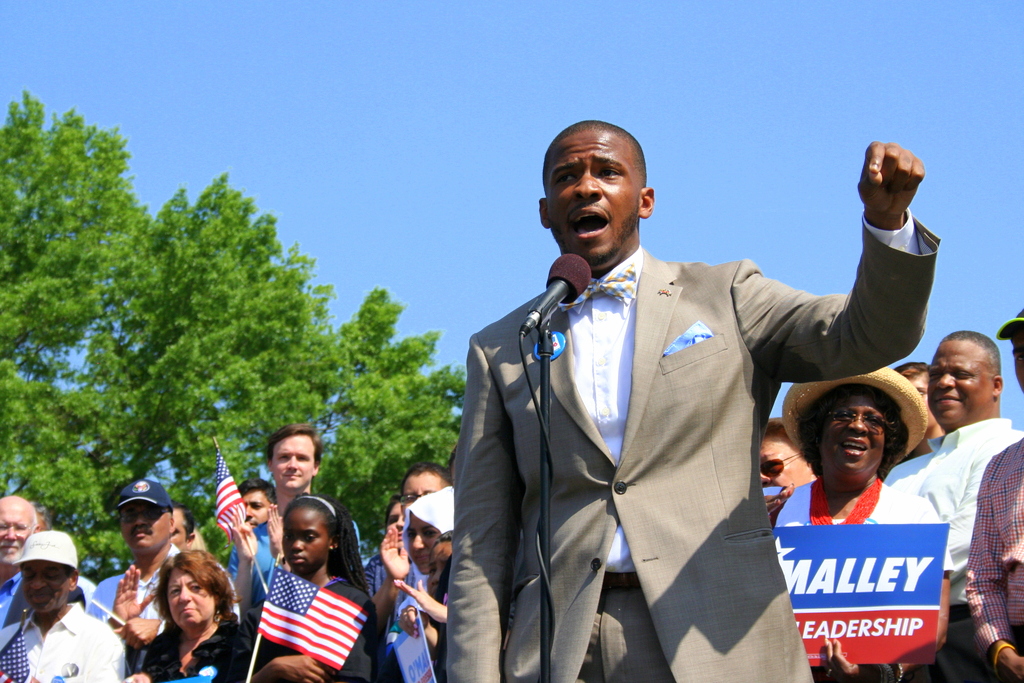 One was Jonathan Jayes-Green, the son of Jamaican and Panamanian undocumented immigrants who credits O’Malley with the passage of Maryland’s version of the Dream Act, that enabled people like him to finish high school and college in the United States.

“That’s why I joined the movement,” he said of O’Malley. “He had our backs.”

A few minutes later, after a campaign video shown on a portable Jumbotron was shut down because of audio problems, the 52-year-old candidate himself ran out to the podium with his wife, Katie Curran O’Malley, and four children, all of them smiling and waving.

If the speech had a theme it was, broadly speaking, “The American Dream,” which he said remains elusive for many Americans.

The former governor also singled out Wall Street banks for causing the recession and wrecking the American economy and called for the reinstatement the 1933 Glass-Steagall Act.

“Goldman Sachs is one of the biggest repeat-offending investment banks in America. If a bank is too big to fail without wrecking our nation’s economy. . . then it needs to be broken up before it breaks us. . . again.”

“For all of us who have given so much of our energies to making our city a safer, fairer, more just and more prosperous place, it was a heartbreaking night in the life of our city,” he said. 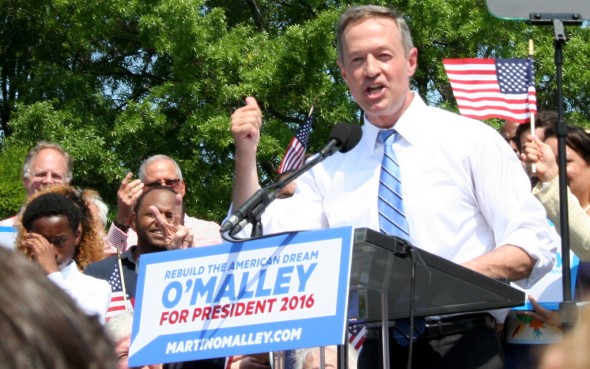 O’Malley painted a glowing picture of his accomplishments in Baltimore and Maryland. (Photo by Danielle Sweeney)

Baltimore’s rage, he said, “was not only about race. . . not only about policing in America. . . but about everything it is supposed to mean to be an American.”

“The scourge of hopelessness that happened to ignite here that evening, transcends race or geography,” he said, drawing a comparison to the “record numbers of young white kids killing themselves with heroin in suburbs and small towns across America.”

Wherever they may occur, “conditions of extreme and growing poverty, create conditions for extreme violence,” he said.

A major protest had initially been scheduled to coincide with O’Malley’s announcement. But that event, “O’Malley’s Unwelcoming Ceremony,” planned by members of Baltimoreans United for Change (BUC), was cancelled last night.

According to BUC’s Facebook page, the reason was because of “downtown militarization and charged rhetoric from pro-FOP [Fraternal Order of Police] marchers.”

There was not an overwhelming police presence at O’Malley’s event. Police were, however, out in force at a noon-time pro-police “#bluelivesmatter” demonstration in front of City Hall.

Uniformed officers tried to keep peace as shouting matches erupted between demonstrators and counter demonstrators. (Some officers also reportedly posed for photos with their supporters.) 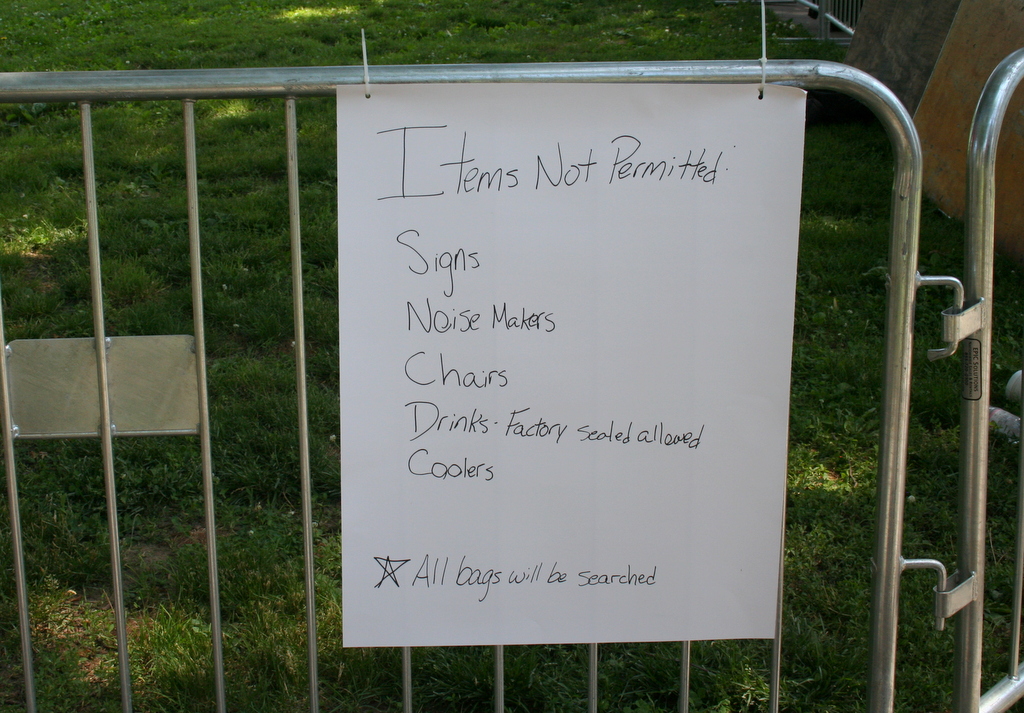 A poster at the entrance to the O’Malley announcement. The No. 1 item attendees cannot bring in with them? Signs. (Photo by Danielle Sweeney)

A few protestors did show up at the O’Malley event, but most did not go inside rally area. One of the activists protesting quietly outside of the park was Duane “Shorty” Davis, who held court on the grassy median near Federal Hill, with his ever-present protest toilet.

The reason, Davis says, he shows up with a toilet is because it symbolizes a common denominator among people and is a good synonym for the city’s ongoing problems.

“White, black, straight, or gay, everybody takes their shit every day,” he said. “And Baltimore’s got a lot of shit to deal with.”

“I’m protesting O’Malley running for president,” he said. Why? “He has not promoted investment in my community” was one of several reasons Davis gave.

He said people “need to join the Republican party because the Democrats ain’t done us right.” 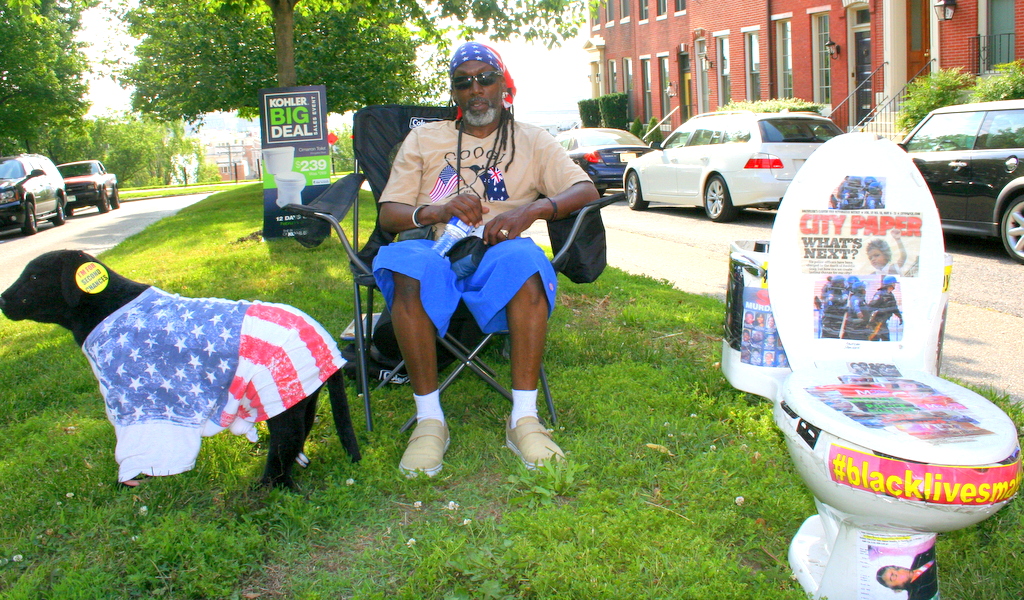