After a bench conference with Circuit Court Judge Wanda K. Heard, Heather Cook and her lawyers stepped back and explained why they were in court today asking for a postponement.

“We need time to finish our investigation,” said attorney David B. Irwin. “There are some things we need to get together. . . some discovery to the state.”

Looking down at the trial table, Cook began to sign the papers waiving her right to a speedy trial when she was addressed sharply by Heard, “Ms. Cook, I need you to listen.”

“Yes, your honor,” Cook said, looking up and waiting while Heard officially informed her of her speedy trial rights. The former Episcopal bishop said she understood and resumed signing the paperwork.

After watching the brief proceedings in an ornate room on the sixth floor of the Clarence M. Mitchell Jr. Courthouse, public defender Todd Oppenheim said he was struck by the long postponement.

“One of our clients would almost never be given a postponement of that length,” Oppenheim said.

Outside the courthouse, a scrum of media awaited the re-emergence of the parties in the case.

First to the microphones came Alisa Rock, the sister of Rachel Palermo, the widow of Thomas Palermo, who died after being struck by an SUV driven by the now-deposed Bishop suffragan of the Episcopal Diocese of Maryland.

The 41-year-old father of two had been biking on a stretch of Roland Avenue in North Baltimore on the afternoon of December 27. 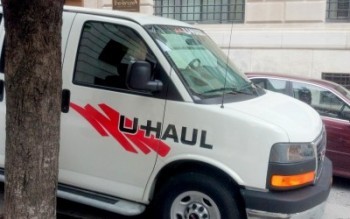 Prosecutors say Cook crashed into Palermo, who was riding in the bike lane, while she was drunk and texting, and that she fled the scene of the fatal crash. Her blood alcohol level was nearly three times the legal limit, prosecutors said.

Rock described today’s delay as “disappointing” despite the fact that the family’s lawyer had prepared them for it.

“We will be here as long as it takes to find justice,” Rock said.

Cook, who resigned last month as the second-ranking leader of the Episcopal Diocese and who has been stripped of her clerical status, has pleaded not guilty in a 13-count indictment that includes automobile manslaughter, driving under the influence of alcohol and leaving the scene of an accident.

“She Hopes We Can Resolve This”

Speaking to reporters, Irwin said, “the earliest of plea considerations” had taken place and that he had discussed a plea with the state “very, very, briefly.”

Asked the likelihood of trial, Irwin said, “I would hope we could resolve the case without trial for everyone’s sake, most importantly the Palermo family’s sake.”

Pressed to describe the additional preparation that necessitated a postponement, Irwin answered this way:

“If this case were to go to trial, it would be a complex case with experts on both sides.”

As in the past, Irwin said the 58-year-old Cook would not be speaking to the media on the advice of counsel. But he did speak on her behalf when asked if there was a message for the Palermo family.

Into a White U-Haul Van

“Only that she hopes that we can resolve this without the need of some sort of contested trial that requires them or anyone else to testify to put them through more trauma,” he said.

With the camera crews following her, Cook again walked to Saratoga Street where the man she has described as “her steady companion,” former Episcopal priest Mark Hansen, was waiting in a white rental van.

She climbed in on the passenger’s side and he drove off.

Irwin had declined to say where Cook was living these days, but did note that “my client is in continuing treatment” for her admitted alcohol problem.