She started out apologetic and self-deprecating, pointing ruefully to a dark stain on the skirt of her teal business suit.

“I’ve got a lap full of dinner. . . I didn’t have enough time to go home and change,” Mayor Stephanie Rawlings-Blake said to about 60 people gathered Wednesday for a Northeast Baltimore neighborhood group’s monthly meeting.

She ended with a ceremonial flourish, whipping out a mayoral “certificate of recognition” for the Glenham-Belhar Community Association and shaking the hand of its president, Edward Whalen, as cellphone cameras flashed.

In between, Rawlings-Blake delivered the pep talk she’s been giving around town in various forms ever since the city exploded in protest and rioting triggered by the fatal injury of Freddie Gray while in police custody.

She extolled, among other programs, a new summer youth hiring initiative and city recreation programs (explaining how larger “destination” recreation centers like the new one at Morrell Park fit modern tastes more than the neighborhood rec centers she has closed).

“The past month or so has been a very, very rough time in our city. But the thing that I’ve seen through it all – and I know we’re still climbing our way out of it – I’ve seen the resilience of our city,” she said, an insight she said she’d gleaned in part via the post-Freddie Gray #onebaltimore initiative.

Still, when she got the question everyone in the room knew was coming – about a widely-opposed 24-hour, 12-pump Royal Farms gas station on Harford Road – the mayor disappointed them.

“I can tell you I can look into it,” she said non-committally, explaining that she thought the matter was in the court system and recounting an instance when she was on the City Council where “we fought hard” against “a mega-gas station” in Howard Park and “today they have a [super]market.”

Afterwards Dorsey articulated the follow-up question he wished he’d asked the mayor: “We’ve been fighting this for years, and five associations are dead-set against it,” he said. “What more does she need to know?”

Rawlings-Blake’s appearance was just one of many she’s been making in city neighborhoods and to select media outlets since criticism of her handling of the post-Freddie Gray unrest sent her popularity plummeting. 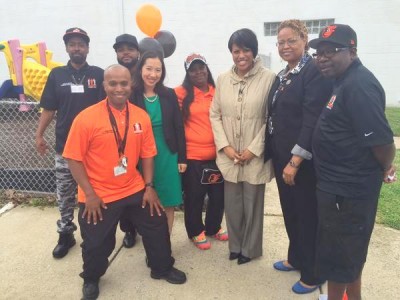 She was at a community association meeting in nearby Hamilton Hills two weeks ago and in Cherry Hill earlier this week, trumpeting relative calm in that South Baltimore neighborhood, as the murder rate in town has spiked to historic proportions.

“With @DrLeanaWen & @SafeStreetsBalt to announce zero fatal shootings within the Cherry Hill post over the last year,” she tweeted, along with a photo of her with community leaders and her new commissioner of health, Leana Wen.

Earlier this week, Rawlings-Blake went on the 98Rock morning show hosted by “Justin, Scott & Spiegel” to discuss the riot.

Pressed by them on her absence from public view for several hours on April 27, when the worst rioting broke out, Rawlings-Blake replied that she’d been behind the scenes coordinating efforts to make sure the city was safe.

“You’re suggesting I was ‘waiting,’” Rawlings-Blake said. “I was not ‘waiting.’ I was working.”

I Did not Flee the City

“So you’re comfortable with it. . . You’re okay with it,” one of them said, pushing her. ” ‘Cause the people in the city are not okay with it.”

“Look. I put on my big girl pants every day and take criticism,” the mayor shot back. “I have very thick skin. I know what my obligation was – it was to make sure that no one got killed at this event.”

Later they brought up comments made by Fox News host Geraldo Rivera, who had come on their radio show.

Rivera “made a claim that I would like you to either refute or confirm,” one of them said to the mayor.

“He [Rivera]said that he had it under authority from a friend of his that is a high-ranking judge that during the riots that you actually left the city and went into a gated community. . . I’d like to hear you either confirm or deny that during the riots you, in a manner of speaking, fled the city.”

“I did not flee the city,” the mayor said, and they did not press her further.

In the mayor’s defense, she had a tough and somewhat sobering act to follow at the Glenham-Belhar meeting on Wednesday.

Maj. Richard Worley, the commander of the police department’s Northeastern District, gave a report on crime trends and tips on personal protection that the audience seemed to eat up.

Worley spoke about the surge in shootings in his district, but said officers are working hard and that talk of a police slowdown is “simply not true.”

He said officers are “being a little more cautious” and that perpetrators lately “are more willing to carry weapons,” but noted that police recently made arrests in three instances of armed carjackings. 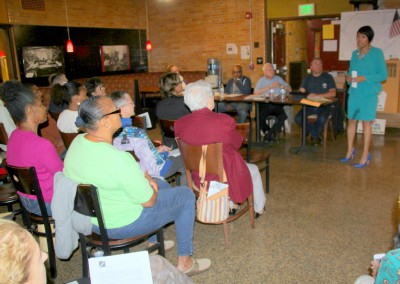 A buzz went through the room when Worley described an “underground app” that “will lock. . . your car combination and unlock your car door with a cell phone.” He said they hadn’t found a phone with one of these apps but was convinced they were being used.

Rawlings-Blake, in the Q&A, fielded questions about crime, youth programs, potholes and high water rates, which she blamed on aging infra-stucture and the lack of flexibility from federal environmental regulators.

“People like to say water is a right, but it’s not free. It costs money,”‘ she said.

A resident, who said she lives on the 5800 block of Walther Avenue, complained that trucks rumble down the street in the early morning hours despite posted signs to the contrary and her complaints to the police. 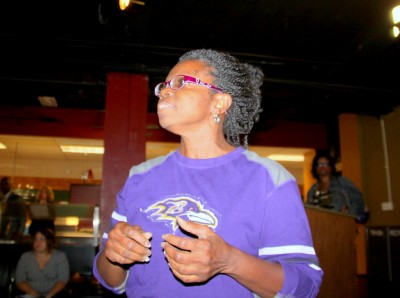 Chequita Lanier said police have not responded to her complaints about 3 a.m. truck traffic on her street. (Photo by Fern Shen)

“Yesterday I thought I had an earthquake,” said Chequita Lanier.

“Yes” came the answer. The mayor talked about other neighborhoods where the truck problem had been solved.

Lanier broke in to say, “I don’t care about them!”

“Respectfully, I did not interrupt you when you spoke,” Rawlings-Blake chided her.

Lanier said she was just frustrated. “When I call the police, they act like it’s not important.”

Afterwards, Lanier told The Brew she was hoping the mayor could make something happen because the normal channels have not worked.

“I just didn’t know where I was supposed to turn,” she said. “It seems like nothing works. Maybe she can make things work.”