Can the visual and performing arts help Baltimore recover from the recent riots? Baltimore’s arts leaders and elected politicians are hoping so.

Next month they’re bringing George Clinton and Parliament Funkadelic to Baltimore to give a free Friday night concert to help kick off the 34th annual Artscape festival, scheduled for July 17-19 in midtown Baltimore.

Other headliners on the MICA Main Stage at Artscape will be The Reverend Peyton’s Big Damn Band and roots reggae artists Michael Franti & Spearhead on Saturday, and jazz band Trombone Shorty & Orleans Avenue from New Orleans on Sunday.

Art will mix with urban realpolitik on Saturday as cast members from “The Wire,” the gritty HBO show filmed in Baltimore, will take part in a “town hall” discussion about empowering city youth after the recent civil unrest.

Cast member and activist Sonja Sohn will lead the “town hall” discussion titled Wired Up! from 2:30 to 4 p.m. in the Modell Performing Arts Center at The Lyric.

The goal of Wired Up!, according to materials distributed today, is “to engage attendees with a unique and meaningful interactive town hall session designed to unpack and dissect what ails our beloved city, but more importantly offer real insight, tools and resources to all attendees who wish to get involved in various mechanisms for positive change in Baltimore.”

More specifically, the news materials continued, the objective of the town hall session is “to drive awareness for two major incentives in the city: 1) voter registration and voter activation, and 2) the evaluation and solution to misdemeanor drug offense arrest and incarceration and its impact on Baltimore residents’ active and positive participation in the renaissance of Baltimore.”

The three-day event, billed as “America’s largest free arts festival” with hundreds of exhibitors, will be taking place exactly three months after the April 19 death of Freddie Gray, which sparked a period of civil unrest that has resulted in a steep drop in attendance at key public attractions in the city. 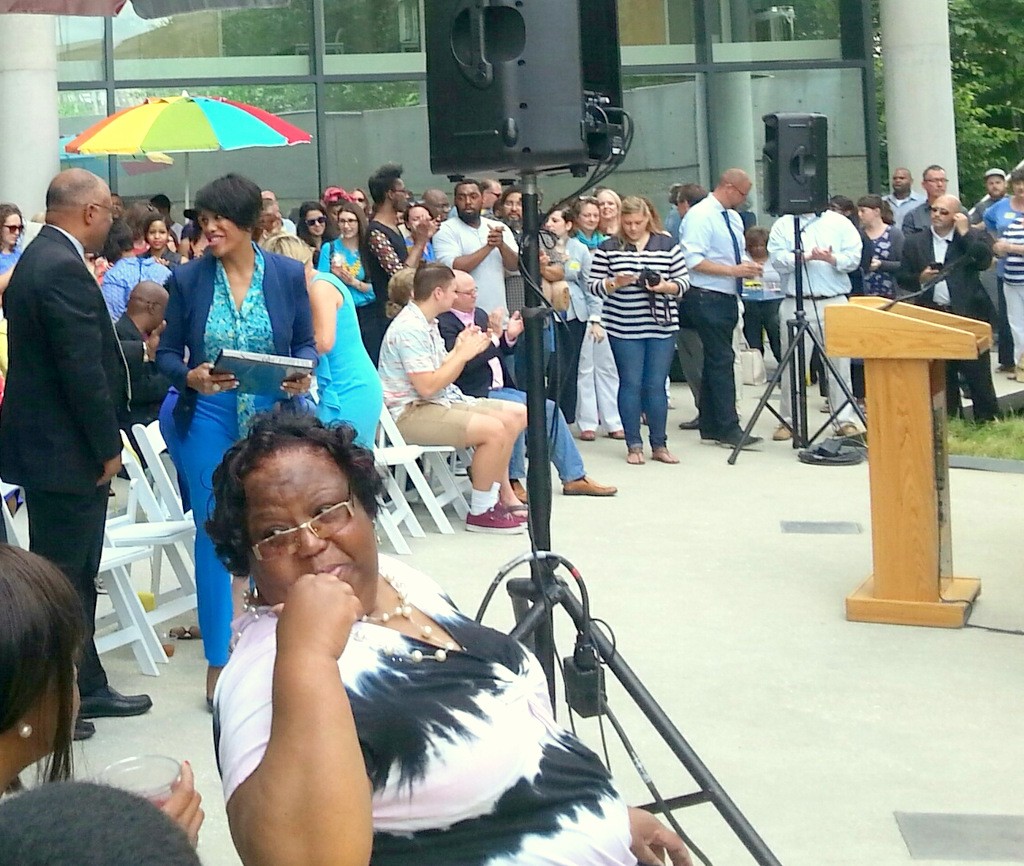 Mayor Stephanie Rawlings-Blake chats it up with former Mayor Kurt Schmoke during the Artscape announcement. (Photo by Ed Gunts)

Sponsored by the Baltimore Office of Promotion & the Arts, Artscape typically adds $25 million to the local economy.

Mayor Stephanie Rawlings-Blake said today that she is counting on the festival to help aid in the city’s recovery in the aftermath of Gray’s death.

“It underscores the importance of arts in the community,” the mayor said of the festival. “Every day we see how artists are helping to rebuild and revitalize the city. . . Art and artists must play a powerful role in our recovery.”

Former Mayor Kurt Schmoke, now president of the University of Baltimore, sat next to Rawlings-Blake during today’s press event, which was held on the university’s campus.

He addressed a fittingly artistic subject – the color of his tie.

“They asked me to wear yellow and blue,” he said. “But the University of Baltimore colors are green. Blue and yellow make green, so I think I have covered all the bases. I am a recovering politician.”

For more info on events: ARTSCAPE 2015