Rachel Dolezal, the Washington state NAACP president whose racial identity has been called into question, spoke in Baltimore at a May 20 post-Freddie Gray protest outside police union headquarters.

Dolezal, president of the Spokane NAACP, waited by her car outside the FOP union hall that day for about an hour before protesters marching from West Baltimore reached the building on Buena Vista Avenue in Hampden.

As she waited, Dolezal said she had come to Baltimore to try to help community leaders working on the issue of improper use of force by police.

Dolezal talked about the challenges for the miniscule black community in Spokane, noting that they comprise “just, like, one percent of the population.” She discussed police brutality issues there including the case of Lorenzo Hayes, 37, who died in Spokane police custody on May 13. 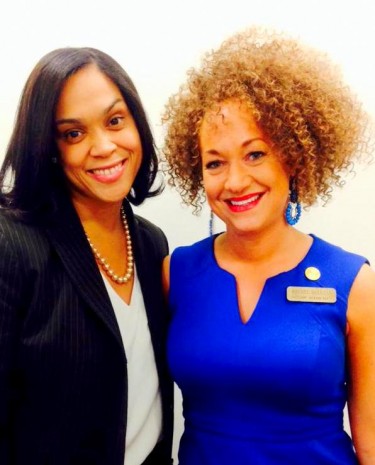 Photos that Rachel Dolezal took with Marilyn Mosby were posted on Twitter on May 22 by the Spokane NAACP.

Speaking with The Brew and local activist Kinji Scott, who was also waiting for the marchers, Dolezal also talked about her experience of having received anonymous threats.

“Not only have we had these incidents with police, I have received these racist threats – death threats,” Dolezal said. “I just came to support Baltimore. We are dealing with a national problem.”

After the demonstrators arrived, confronting the line of police officers standing in front of the building, Dolezal  joined them. She was one of several people to speak to the chanting , pumped-up crowd, addressing the same issues she had discussed with The Brew and leading the crowd in a chant of “No justice, no peace!”

At some point during her visit to Baltimore, it appears, Dolezal also visited city State’s Attorney Marilyn Mosby at her office.

Snapshots of Dolezal posing with Mosby are posted on the Spokane NAACP Twitter page, along with the visitor’s pass she apparently wore during her visit to Mosby’s office.

In recent days, Dolezal has been the center of a national media furor after a local Spokane television reporter confronted her about accusations that she has been misrepresenting herself as partly black when she is the daughter of two white parents.

She also came under scrutiny by Spokane media after a postal inspector concluded that hate mail left in the NAACP’s post office box was never processed by the postal system.

UPDATE: Local independent journalist A. F. James MacArthur posted on YouTube this video he shot of Rachel Dolezal’s remarks to the crowd protesting outside Baltimore protest union headquarters on May 20. Thanks to Baltimore Spectator for posting: