For years it was known as the “Census Building” because U. S. census takers would set up operations inside for their once-a-decade population count and then move out, leaving it dormant again. Before that, it was a tin can manufacturing factory.

Now the four-story building at 2601 N. Howard Street, on the edge of Remington and Charles Village, is one of the most celebrated residential developments in Baltimore. When President Barack Obama visited the building back in January (he stopped in at Charmington’s), it already had won more than a dozen local and national awards.

Earlier this month, it received one of the nation’s highest awards for urban development and placemaking.

Miller’s Court, a $21.1 million, privately developed “live/work” environment for teachers and education-focused nonprofits, won the top prize in the 2015 Rudy Bruner Award for Urban Excellence program. The award is a Gold Medal and $50,000.

The awards program was created in 1987 “to promote innovative thinking about the built environment and advance the conversation about making cities better.” according to its sponsor, the Bruner Foundation.

Every other year, the foundation celebrates” transformative places” that are distinguished by their physical design and the contributions they make to the economic, environmental and social vitality of America’s cities. A committee of urban experts selects the winners.

The national recognition of Miller’s Court is a reminder, six weeks after the April riot and civil unrest, that Baltimore is a place where good things can happen, when there is the will to make it so.

In a city beset by urban problems, Miller’s Court represents an earnest effort to offer solutions. 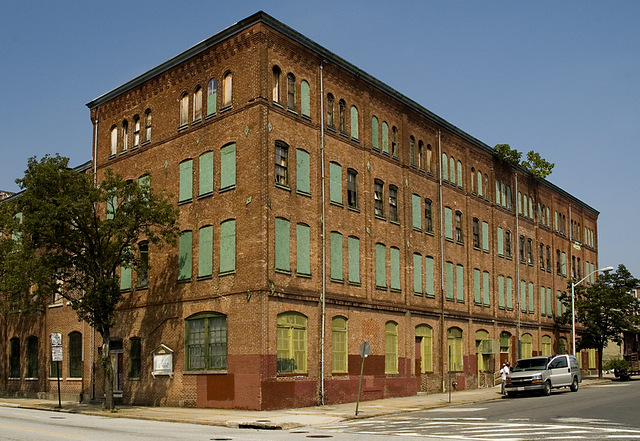 The forlorn “Census Building” before its rehab. (Photo courtesy of Seawall Development Co.)

“Miller’s Court tackles one of the most critical issues facing American cities – education,” said Rudy Bruner Award founder Simeon Bruner. “It shows that it’s possible for a private developer to advance a social mission, making a profit in the process. Its replicable model can, and has been, adapted to other groups and other cities.”

The project team was headed by Baltimore’s Seawall Development Co., working with Enterprise Community Investment Inc and Marks, Thomas Architects, among others.

The development team addressed several urban problems that face Baltimore: the need for fit and affordable housing for teachers, the need to rejuvenate communities by finding new uses for underused old buildings, and the need to support and improve public education.

The result, completed in 2009, is a mixed-use project designed especially for Baltimore City school teachers, the organizations that support them and the communities they serve. It includes 40 rental apartments with loft-like interiors and 30,000 square feet of office space and shared meeting rooms for education oriented non profits such as Teach for America.

A Teacher Resource Center provides copiers for printing class materials and includes a lending library. A cooperatively owned cafe in the building, Charmington’s, serves as a gathering spot for teachers, tenants, and the community. That’s where Obama had lunch this year with U.S. Sen. Barbara Mikulski and others, while he was in town for meetings at the downtown Hilton.

What makes the Bruner award particularly impressive is that Bruner representatives visit each finalist to see it for themselves before selecting a winner.

Bruner 2015 finalists, which will each receive a silver medal and $10,000, included these projects:

• Falls Park on the Reedy in Greenville, S.C.: A 26-acre river corridor running through the heart of Greenville, restoring public access to the falls and green space and triggered adjacent downtown development.

Saying Seawall is honored and humbled to be Bruner’s Gold Medalist, partner Thibault Manekin explained that “the idea that real estate can, in some small way, play a role in improving the quality of children’s education is something about which we are incredibly passionate.” 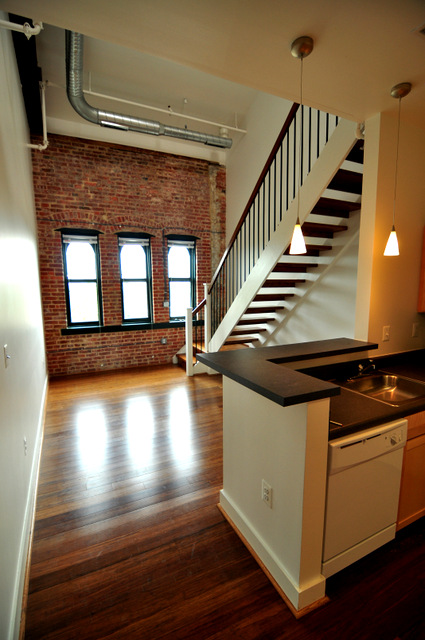 Besides the medal and prize money, the Bruner Foundation will publish a book about the five winning projects, including highlights from the selection committee’s discussions.

“We were delighted to be part of the team that was able to develop such an extraordinary project,” said Tom Liebel, principal in charge of the project for Marks, Thomas and chairman of Baltimore’s Commission for Historical and Architectural Preservation (CHAP).

“It serves as the template for a lot of the work we have done since then.”

In a blog post written in conjunction with Metropolis magazine after visiting Miller’s Court, Anne-Marie Lubenau, director of the Bruner Award, described some of the characteristics that set the project apart.

“Interaction is a key component of life and work in Miller’s Court,” she wrote. “Networking and information sharing among its residents – fueled by the presence of Teach for America and other education, youth and community-service focused non-profit tenants – fosters increased resources and new opportunities.

“Monthly brown bag lunches featuring guest speakers help promote connections among the inherent nonprofits and with the broader community. The complex’s central, landscaped courtyard offers outdoor space for informal gatherings and community events. Public areas feature artwork made by students from the nearby Maryland Institute College of Art with materials salvaged during the construction process.”

Miller’s Court was financed with historic and New Market Tax Credits, a federal program that promotes private investment in low-income communities, with funding from Enterprise Community Investment and Sun Trust Bank. A $300 to $600 discount on the monthly rental rate for apartments is offered to teaching professionals.

The 2015 selection committee included Rebecca Flora, a community planner from Chestertown, Md.; Larry Kearns, a partner of Wheeler Kearns Architects in Chicago, Ill.; India Pierce Lee, a program director with the Cleveland Foundation in Cleveland; Mia Lehrer, a landscape architect who heads her own firm in Los Angeles; James Stockard, a lecturer in housing at the Harvard Graduate School of Design in Cambridge, Mass., and Mark Stodola, Mayor of Little Rock, Ark..

Established in 1963, the Bruner Foundation is known for its pioneering approach to social issues including health care, education, evaluation and the built environment. Simeon Bruner, founding principal of Bruner/Cott Architects and Planners of Cambridge, Mass., established the Rudy Bruner Award in honor of his late father.

In her report about Miller’s Court following the site visit, Lubenau noted that the project “has generated additional investment in the community of Remington as well as interest from other cities.”

More On the Way

At the urging of several building residents, Seawall purchased and renovated 30 vacant neighboring houses to create a residential development called Miller’s Square. Baltimore City Public School teachers and police officers are eligible for $25,000 grants toward home purchases there, and several have been bought by former Miller’s Court residents, she noted.

Seawall has also developed Union Mill, a local initiative similar to Miller’s Court, in Woodberry, and is currently working with Enterprise and other partners to extend its “Center for Educational Excellence” community-building model to 10 other cities, according to Lubenau.

And there’s more to come. One characteristic that sets Seawall apart from many local developers is that it works on multiple projects in the same area, so each investment reinforces the previous ones.

Seawall is building a $40-million mixed use development along Remington Avenue called Remington Row, with the Johns Hopkins University as a lead tenant. And last year, it purchased the former Anderson Automotive property near 25th and Howard streets.

That’s where a proposed development called 25th Street Station was to be anchored by a branch of Walmart. The plans, approved by the City Council, drew community opposition and, combined with financial setbacks by the developer, never moved ahead.

Seawall is in the early stages of formulating plans for the property and has signed an agreement with a community group to abandon the “big-box” Walmart concept and essentially start from scratch with a new PUD (Planned Urban Development). 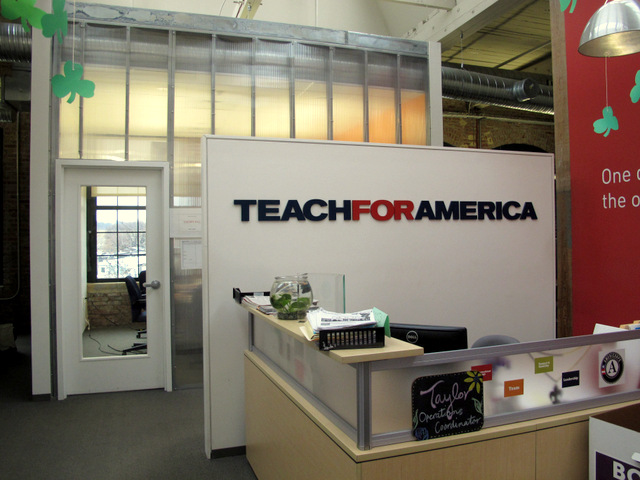 Teach for America offices at Miller’s Court. (Photo courtesy of the Bruner Foundation)