Education Secretary Arne Duncan watched 11-year-old India Jones build circuits and listened as she told him of her plan to become a doctor.

He saw the “maker-space” where Jones and other students at Baltimore’s Liberty Elementary School build electrical devices, make apps and do three-D printing.

He heard principal Joseph Manko tell the story of how the adjacent recreation center, slated for closure by the city three years ago, was saved by the community and reinvented as The Liberty Rec and Tech Center, a haven from the streets and a place to learn everything from sewing skills to Zumba moves to coding.

He heard from teachers how fearful children were, the day after the April 27 Baltimore rioting. “We had children who had family members whose cars were burned,” one said.

After touring the Northwest Baltimore school along with other top federal education officials yesterday, Duncan gave an assessment that pleased the assembled crowd of staff, non-profits and dignitaries. 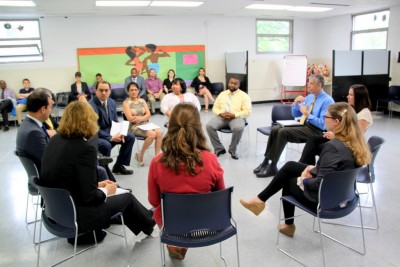 Manko (at left, holding paper) leads a discussion with Duncan and his staff. (Photo by Fern Shen)

“For all the challenges some of these children face,” he continued, “I am wildly hopeful, I’m wildly optimistic, about what these kids are going to do.”

“Something I Can Use”

As with most of the attention lately being showered on Baltimore’s poor, predominantly black neighborhoods, the subtext of this visit by Duncan, Chief Technology Officer Megan Smith and others from Washington was the post-Freddie Gray unrest.

Duncan asked about the riot and Manko recounted how, even though school was cancelled in Baltimore the day after it happened, they opened the rec center and donations of food came pouring in.

Liberty, where students get a strong dose of STEM (science, technology, engineering and math) education was an upbeat choice for visit.

Students with iPads (by next year the school will have 460 of them of them) showed Duncan their skills on TinkerCad (3-D digital design software) and projects made through Adobe Voice. The younger ones enthused about Squishy Circuits and Makey Makey, the starter activities used to capture their enthusiasm.

Projects on the wall had QR codes that played back student math projects. 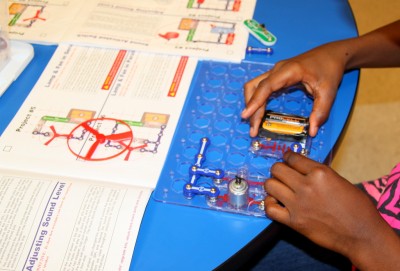 Student building a machine to make a propeller spin shows how it worked to visiting officials. (Photo by Fern Shen)

Asked what her family thinks, she said, “My grandparents and my mother are very supportive.”

Teachers, in a roundtable discussion with Duncan and U.S. Chief Technology Officer Megan Smith, explained that students with delayed reading skills are nevertheless able to learn and express themselves through programs like Adobe Voice.

What could Duncan do to support the school further?

Several speakers made the point that the transformation of the school and resurrection of the recreation center happened largely because of community organizing, volunteer help from the city’s tech community and financial assistance from foundations and non-profit groups and corporations.

The Digital Harbor Foundation have been key player’s in Liberty’s success as has Code in the Schools, which runs the maker-space. Through help from community partners, students at the school were able to have more than 90 field trips during the year to enhance their in-school learning.

In order to keep programs going at the public school this summer, the school raised $58,000 from private donors.

Trueheart, introduced as “our No. 1 advocate” by Manko, buttonholed Duncan afterwards, pitching him on more support for the school and the need for improved middle and high schools. 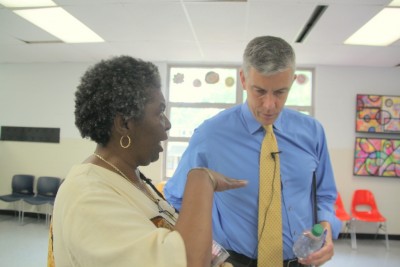 “We can’t send our fifth graders to some of these places we call schools,” she said.

It may have been a harsh statement but Duncan clearly heard it, mentioning the need for middle and high schools.

And he got the point, as well it seemed, on stepping up to meet the involvement of the community and its private partners.

“They raised a lot of money to open the school,” he said. “We should see what we can do to support that.” 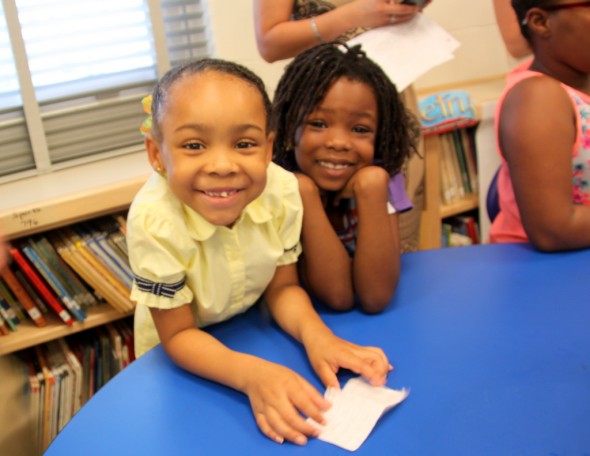