Judging from the tone of their public statements last night, “public enemy No. 1” in the eyes of the police commissioner and mayor isn’t any of the persons responsible for the 70 homicides committed in Baltimore in the six weeks since the riot.

The 32-year veteran of the Baltimore City Police Department and recently installed president of the Fraternal Order of Police (FOP) Lodge 3 was accused by Police Commissioner Anthony W. Batts of issuing a “blatantly false and misleading” press release.

Ryan is plotting, Batts said in a lengthy statement sent to media, to take over police policy and manipulate his fellow officers “as a political tool or power base” against the administration.

In her statement (released at just about the same time as Batts’), Mayor Stephanie Rawlings-Blake says the FOP chief is tearing at the fabric of a city she is trying to “heal.” His battle against City Hall, according to the mayor, began earlier this year when his union “fought us at every turn because we dared to introduce commonsense” limitations on the Law Enforcement Officers’ Bill of Rights in the General Assembly – and won.

In her harshest comments, Rawlings-Blake characterizes the FOP as trying to protect “police officers acting unlawfully” – and President Ryan of more or less seeking to ignite another riot.

Her statement then abruptly shifts tone, going from a Freddie Gray narrative of police callousness to a shout-out about the “courage and skill of our officers” whose daily sacrifices leaves her “grateful and humbled.”

Not so with Batts.

In his three-page release, he hammers away at Ryan for “following the direction of a hired public relations firm” and issuing statements “derisive” not only of the police command, but of “the work done by officers in the Training Academy and other units within the agency.” 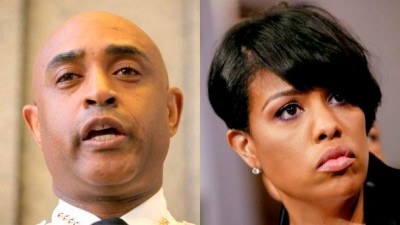 Police Commissioner Batts indicated that police tapes will be released, while other documents are “under review.” Mayor Rawlings-Blake made no such promises, called Ryan’s statements misleading and baseless. (Photo: bet.com)

What provoked the outbursts?

A “President’s Blog” by Ryan, issued as a press release at 2:29 p.m., accused Batts and Rawlings-Blake of withholding tapes and stalling an investigation into what happened during the April 27 riot.

Ryan wrote, “The bottom line is simply that our leadership – Commissioner Batts and State’s Attorney Mosby – has done nothing since the riots to investigate protocol shortcomings and better prepare our officers. This is obviously a concern to my members, but should also greatly concern the citizens of Baltimore City. The conditions that led to the riot are still present and any incident can serve, once again, as a flash point.”

On June 3, Ryan announced on his blog that the union was conducting its own “After Action Review” of the riot – which reportedly injured over 160 officers – because “none appears to be forthcoming” from the mayor or commissioner. He said it was incumbent upon the union to take this action to ensure officer safety.

It goes without saying that since April 27, and especially after State’s Attorney Marilyn Mosby charged six police officers in the death of Freddie Gray on May 1, the relationship between the police command and rank and file has been strained. Arrests are down sharply as shootings and homicides have skyrocketed from the same time last year.

According to Ryan, the FOP requested all written correspondence and radio transmissions between City Hall and the Police Department during the riot. 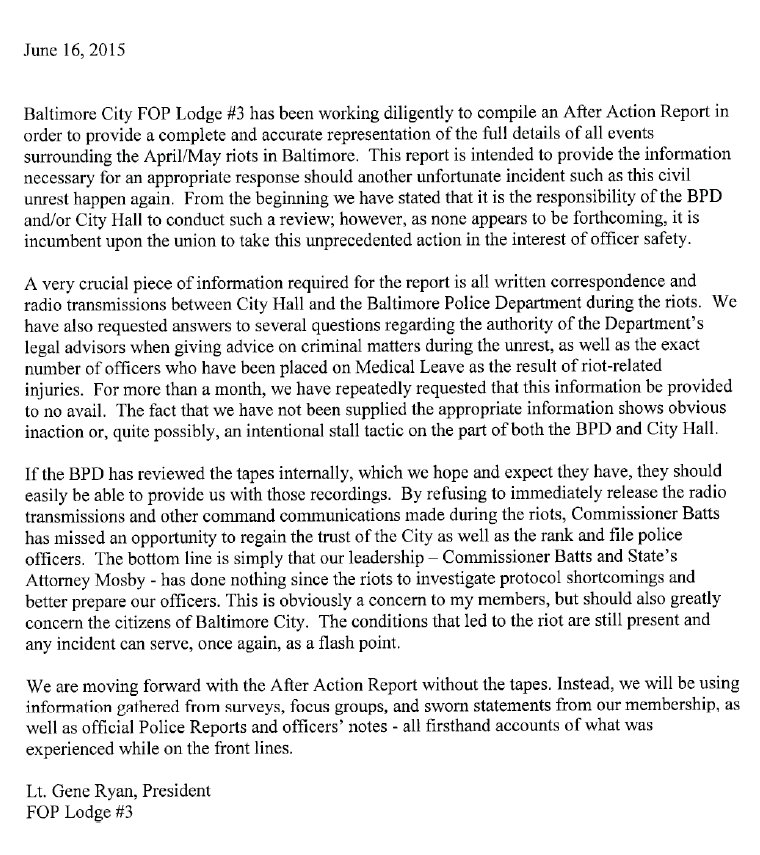 “The fact that we have not been supplied the appropriate information shows obvious inaction or, quite possibly, an intentional stall tactic on the part of both the BPD and City Hall.”

He continued bluntly in yesterday’s release, “By refusing to immediately release the radio transmissions and other command communications made during the riots, Commissioner Batts has missed an opportunity to regain the trust of the city as well as the rank and file police officers.”

Mayor: I Never Ordered “Stand Down”

Rawlings-Blake did not directly respond to the union’s charge that her office is seeking to stall an investigation of the riot by refusing to release documents that shed light on her staff’s decision-making during and before the riot.

Instead she stated, “We are currently in the midst of an extensive review that began before the FOP decided to conduct their own After Action Review. As we work through the process, I look forward to sharing information with all interested parties, including the FOP.”
___________________________________

Such a review, she said, would be aimed at “better prepar[ing] Baltimore City should another event occur,” but added, “Let me be clear: The public will know the full truth of what happened during the moments before and after the unrest.”

Whether her administration would actually reveal the radio transmissions, CCTV video tapes, command-level text messages and other raw material generated “during the moments before and after” the riot was unclear in last night’s statement.

But what would be “made clear” in any disclosures, the mayor vowed, was “that I never ordered the brave men and women of the Baltimore Police Department to stand down.”

This sentence provides the mayor’s version of the biggest unanswered question arising from April 27 riot.

Did anyone order the police to “stand down” as the riot gained momentum across West Baltimore amid of a flurry of bricks and bottles hurled at officers?

Batts’ response to Ryan’s accusations provided some new details about the factual data in the possession of the BPD – along with the implication that some or all of it may be released in the future.

He also revealed that Ryan had sent him an email on May 27 alleging that the department’s “legal advisors” overruled field commanders during the April 27 riot, “determined arrest action or lack thereof,” and “were, apparently, the final command authority.”

Batts said he and his staff have taken a number of steps in the last six weeks to improve safety and working conditions for officers while simultaneously “rebuilding community ties and engaging in the crime fight.

These steps included PERF (Police Executive Research Forum) facilitated conversations between command and officers to engage in a “lessons learned conversation,” bringing in Critical Incident Stress Teams for several days of counseling, engaging some officers with Mobile Field Force training, and continuing the purchase of $2 million worth of new equipment approved by the mayor.

“Perhaps most importantly, and consistent with the police commissioner’s ongoing mission of transparency, the International Association of Chiefs of Police was contacted on May 22, 2015, and asked to begin an outside, independent review of the civil unrest and the department’s response.”

This is the same review that Rawlings-Blake alluded to in her statement when she described an “extensive review that began before the FOP decided to conduct their own After Action Review.”

The conclusions of this review, the mayor said last night, “will be shared with all interested parties, including the FOP.”