The rhetoric is getting ugly and the behind-the-scenes maneuvering super intense as Gov. Larry Hogan prepares to replace outgoing Baltimore Liquor Board chairman Thomas Ward in a matter of days.

Korean store owners are charging racism, community advocates are warning of liquor industry influence-peddling, and an anti-Ward Twitter troll is kicking into overdrive.

“The fines are totally out of control! Six months closing! Three months closing!” complained David Kim, chairman of the board of KAGRO (Korean-American Grocers and Licensed Beverage Association), speaking to The Brew.

“They are totally targeting Koreans. They are definitely racist,” Kim said when asked what he thinks is behind the alleged over-regulation by the board.

“It’s a known fact that the mayor herself is racist,” he added, referring to Stephanie Rawlings-Blake.

Kim said KAGRO and others representing Korean liquor licensees are lobbying the governor to urge him to curb what they see as the excesses of the current three-member board.

Asked if the tavern and liquor store owners are advocating any particular person as a better choice for chairman, Kim had a quick answer.

“Oh, we think Mark Fosler would be good,” Kim said, referring to a longtime liquor inspector and Liquor Board chairman during the Republican Robert Ehrlich administration. 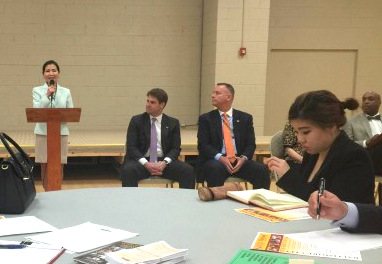 In March, Fosler orchestrated a protest of Ward’s efforts to make inspectors work evenings and weekends – and recently sued the board for race and age discrimination.

“Mark Fosler’s been calling me from time to time to tell me this isn’t right, but that there’s nothing he can do about it because he’s just an inspector,” Kim said.

The 61-year-old Fosler, who is white, contends he was improperly passed over for the job of chief liquor inspector because of his age and race. He did not return calls seeking comment.

“Can You Imagine That?”

A year ago, Ward, a retired Circuit Court judge, agreed to assume the board’s chairmanship at the request of then-Gov. Martin O’Malley. The appointment came after a devastating state audit that found lax and uneven enforcement of liquor laws, a lack of written policies and procedures and other problems.

Now the entire three-member board is about to change over. (Hogan’s office confirmed that the governor also plans to replace commissioners Harvey E. Jones and Dana Petersen Moore.)

The new appointments are seen as crucial by warring constituencies who have either applauded or decried Ward’s tougher stance on bars, liquor stores and taverns.

“There is a growing concern that Gov. Hogan will appoint new commissioners who are more ‘pro-business’ and less likely to take into consideration community concerns in addressing problem liquor outlets,” Ira Kowler of the Greater Homewood Community Corporation (GHCC), wrote in an email exhorting neighborhood activists to write to Hogan.

Pleas by activists were even caught on tape at last week’s Liquor Board hearing, Ward’s second to last.

“If you have any influence, as Gov. Hogan replaces you, I beg you to exert that influence,” Joanne Masopust, president of the Fell’s Point Community Organization, told Ward during a break in the proceedings.

“I hope they don’t destroy what we’ve done,” Ward replied. “You won’t believe what I’m hearing!”

“They’ve even interviewed Mark Fosler! Can you imagine that?” Ward asked.

Writing to the Governor

Masopust told him she and others are writing letters.

In her letter to Hogan, Stokes said that previously, there has been “an ‘anything goes’ atmosphere in Baltimore where licensees knew they could operate at standards far below those allowed in other Maryland jurisdictions without fear of enforcement.”

Along with quality-of-life concerns, the appointments are also in the spotlight because of all that is at stake financially for licensees – and politically for Democrats and Republicans facing off in the 2016 election cycle.

High-end bars have been set back by Liquor Board actions, along with the small stores and taverns selling cheap liquor at 8 a.m. and attracting loiterers and drug activity,

For example, the Crossbar Der Biergarten, rising on Cross Street in Federal Hill, is at the center of an intense debate over so-called “mega-bars.”

The beer bar’s backers have said they’ve poured more than $2 million into the project, which was dealt a blow last year when the Ward board declared the license they were using had expired. (The project has come back to life through a Circuit Court decision that Ward has questioned.)

The Democratic mayor has said liquor stores are associated with blight and poor public health. The Republican governor, on the other hand, has described them as small businesses that should be supported.

“The action to replace Judge Ward opens a window to us as to how the Hogan administration will govern the State of Maryland, and it ain’t pretty,” wrote South Baltimore resident Henry Valeri in a recently published letter in the Baltimore Sun.

“The administration appears bereft of any solid ideas, goals, plans or analytical capability. It is, instead, driven by political slogans, superficial thinking, special interest groups and run-amok staffers.”

Vacation photos of agency staff, internal Liquor Board documents (including the letter of complaint by inspectors), comments mocking Ward’s age – as well as personal information from Facebook and other sources – have turned up regularly on @TheMacList, whose identity is not made known on the Twitter account. 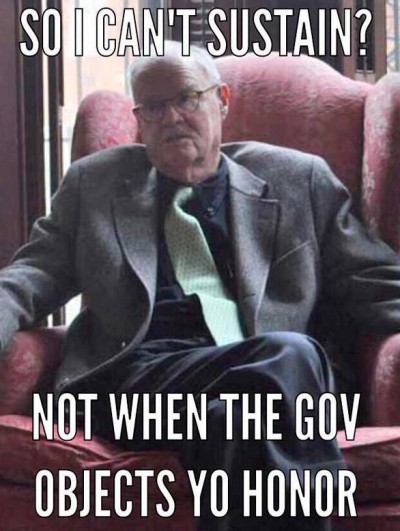 With the Hogan appointments to be announced shortly, the Tweeter has been posting obsessively.

“Bye bye gang and grab one more lunch at Werner’s on all of us at the office yo Honor,” said one posted today.

“What you mean you want me to brew coffee?” said the caption on a photo posted yesterday of Commissioner Jones, who is African-American.

In April, the harassment of Ward moved from the Internet to his neighborhood.

“Rich old racist,” said a flier taped to utility poles and other locations near Ward’s home in Bolton Hill. Tech entrepreneur David Troy said he found one in his mailbox.

Ward said he found the fliers annoying, but not worth taking action about.

“Some of my neighbors were up in arms, wanted me to do something,” he told The Brew. “I said no, not to bother. Whoever did it is just a loser.”

Ward is not the only commissioner facing possible intimidation.

Parking for the past year in a spot on Baltimore Street reserved for Liquor Board use, Commissioner Moore said she has returned to her car to discover a tire punctured and flat three times and also had a rear light ripped off.

“I can’t say for sure that it’s because of the Liquor Board stuff, but the punctures were not from nails, but from holes made in the side of the tire,” she said.

“And when I switched to a spot inside the parking garage, the problem went away,” she observed. “As MacList would say, you do the math.”