Baltimore Social may be better known for its low-key adult sports leagues, featuring bocce, kickball and a fun time socializing in a local pub afterwards, but yesterday they kicked off a Baltimore-based league focused on kids and families.

At Herring Run Recreation Center yesterday, despite the threatening skies and eventual torrential downpour, about two dozen area kids in the program’s target age range (ages 6-12) assembled on the field for some flag football drills and, well, just running around.

When the rains came, the staffers and some volunteer coaches – many of them city police officers and firefighters – moved the drenched players into the gym to continue the game and play a little basketball.

Baltimore Social founder and CEO Giovanni Marcantoni talked about how they decided to create the a program they’re calling Bmore Kids Sports.

“We just thought ‘What better company?’ We have the website, the infrastructure, and insurance already, we have everything. So this was an idea we came up with to give kids something to do and really give Baltimore something it needs,” Marcantoni said. 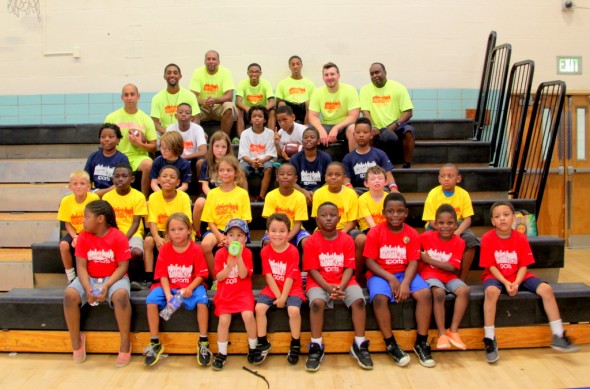 “Right now our goal is to start here and then grow more,” he said. “Eventually we want to be giving more un-athletic kids other ways to be active and social through sports like bocce ball and sailing.”

Baltimore Social is the Baltimore branch of Social Leagues, which organizes casual sports leagues in cities around the country. Offering skeeball, sailing and bocce, their emphasis is on social interaction over competition.

Their new youth league in Baltimore, which has 60 participants enrolled so far, will feature football, soccer, kickball and sailing, Marcantoni said.

“We think this is not only a great activity for the kids, but a powerful way to build communities while getting kids off the couch,” he said. “Our city needs these types of programs, and we’re happy to do our part.”

The pilot program at Herring Run is free thanks to corporate sponsors including Donahoo Collison Center, Laundry City, Regional Management, and Rowen Concrete.

Members of Baltimore Social’s adult leagues can also help through a Sponsor a Kid program. The Bmore Kids program at herring Run meets every Tuesday from 5-7 p.m.