The Chambers Building, an early work of Modern architecture in midtown Baltimore, died in the first week of summer 2015 after a close encounter with a claw-wielding excavator.

Built in 1964 to house a noted interior design company, the three-level structure  gained fame when it won an award from the Baltimore chapter of the American Institute of Architects and was featured in A Guide to Baltimore Architecture.

It was 51 and had been vacant for a decade.

The proximate cause of death was demolition, but the Chambers building, located at 1010 North Charles Street, was also afflicted with obsolescence, deterioration and abandonment.

There are no immediate survivors, although a few distant architectural cousins are holding on here and there. 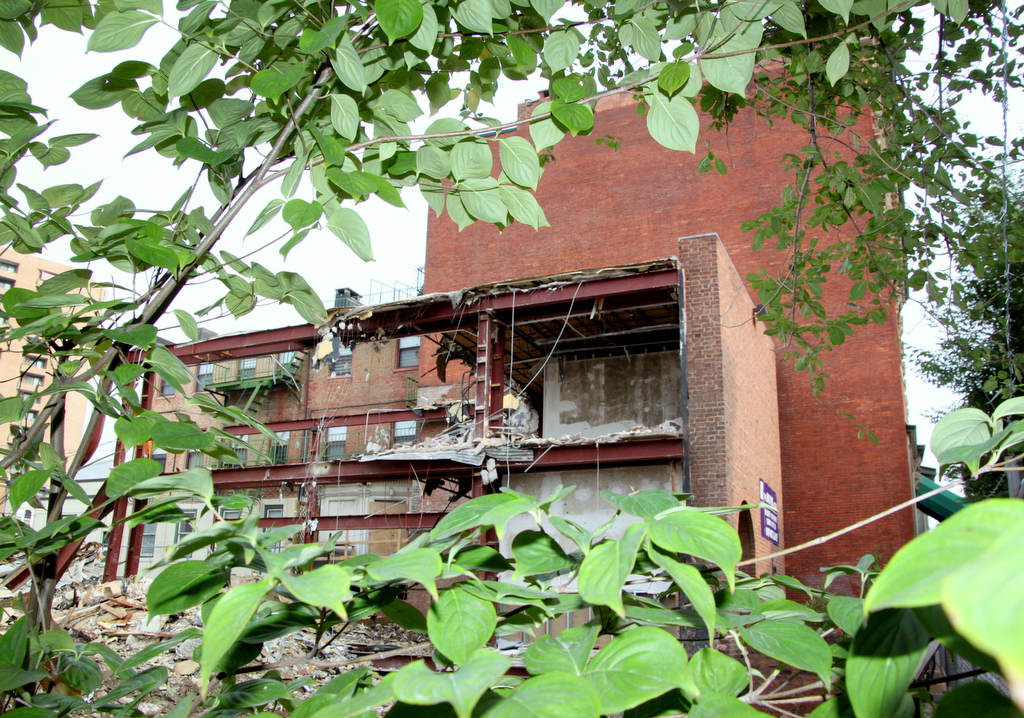 The buildings is being demolished by The Berg Corp. (Photo by Fern Shen)

The Berg Corporation is disposing of the remains. No memorial service is planned. In lieu of flowers, donations may be made to Docomomo, the international working party for the documentation and conservation of buildings and sites of the Modern movement.

Some mourners have been showing their respect by photographing the low-slung brick structure in its final days.

“It’s sad to me because I spent 33 years of my life in that building,” said Chambers board chairman Robert Hickman, who has been visiting the site every day to photograph the demolition. “ I started in 1972 as a designer, and I ended up as chairman of the board.”

The building “worked beautifully for us,” Hickman said.

“When it first opened. there was a showroom and people came in to shop for furniture, accessories, that sort of thing,” he recalled. “Later we added a boardroom and conference rooms [and] a resource library for fabrics, wallcoverings, carpets.”

As a contemporary building in a historic setting, it stood out and brought attention to Chambers, long before companies knew much about using architecture for ‘branding.’ 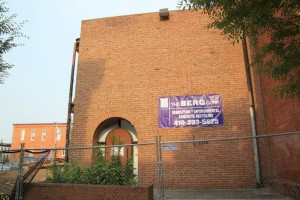 “It was an aggressive statement in the 1960s,” Hickman said. “It showed our clients that we were design savvy. So it worked very well for us.”

Chambers used the building for a variety of gatherings, during and after work, Hickman noted. “I remember when there were parades on Charles Street, we would go up on the roof and watch them. We threw parties in that building. . .It was a great building for everything from work to play to social activities.”

Besides looking different from its neighbors, the Chambers Building was filled with futuristic gadgets designed to make the work day better, from control panels that dimmed all the lights in a room to underground heating coils that melted snow at the front entrance.

“It truly was a time capsule for all the modern technology of the 1960s,” said Frederick Hiser, an architect who worked there in the 1990s as the first managing principal of the company’s then-new architectural design division, Chambers Architectural Associates.

“It was a refreshing moment on Charles Street,” Hiser said. “In its heyday, it made such a statement. It was mysterious. It was brooding. It was set back. It was swank and luxe and James Bond-y, in the truest sense. It was a little like the House of Tomorrow from the 1964 World’s Fair. It had all the gadgets and hoo-ha’s that you could possibly want. They spared no expense. It was definitely a piece of history. “

Berg started its work by erecting a chain link fence around the building and stripping out the interior and windows, turning the structure into a see-through building.

Two weeks ago, the contractor began chipping away at the outer walls, starting on the west side and working toward the Charles Street side. 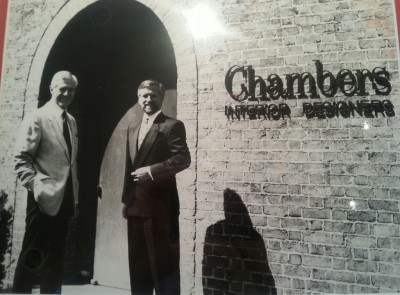 The Goulds control several properties along Charles Street, including the parking lot just south of the Chambers site, at the northwest corner of Charles and Eager streets.

With the Chambers Building gone, the land underneath could be combined with the parking lot at Charles and Eager to create one large development parcel, nearly half a city block in size. According to owner’s representative Joel Charrington, that is most likely what will happen.

The land is zoned for commercial development, which could include offices, housing, stores or a combination. The Goulds submitted plans to the city several years ago for a three-level, 27,000-square-foot office and retail building on the Charles and Eager lot, but they never moved ahead with construction. The developers have not made public any plans for a project on the combined lot.

Shock of the New

Named after its sole occupant, the H. Chambers Company, the Chambers Building opened the same year that the New York World’s Fair did, focusing attention on all things modern and futuristic.

The brick building provided an aesthetic jolt for North Charles Street, which included such traditional landmarks as the Maryland Club, the Belvedere Hotel and the Monumental Life Insurance Company. It gave Baltimore an early taste of what critic Robert Hughes called “The Shock of the New.”

The Modern design was no mistake. Chambers, founded in 1899, began as a specialist in painting and church frescos, then expanded to interior decorating and interior design, then added architectural design.

Before moving to 1010 N. Charles Street, it was located at 1026 N. Charles Street, and before that, other locations in downtown Baltimore. For their latest move, company executives wanted a building that would convey to prospective clients that the firm was capable of producing elegant, cutting edge designs for homes, offices and other settings.

Richter developed a reputation for designing modern buildings for historical urban contexts, including a series of additions to the Lyric Opera House on Mount Royal Avenue, the current city school administration headquarters on North Avenue, and an addition to the Peabody institute library on St. Paul Street between Centre Street and Mount Vernon Place.

His work is characterized by flat masonry walls with little or no ornamentation and large windows, often arched. The Peabody building and the city school headquarters are architectural cousins of the Chambers Building.

In their description of the Chambers Building for A Guide to Baltimore Architecture, authors John Dorsey and James Dilts noted that Richter picked up the rhythms of old row houses along Charles Street, using a Modern design vocabulary. 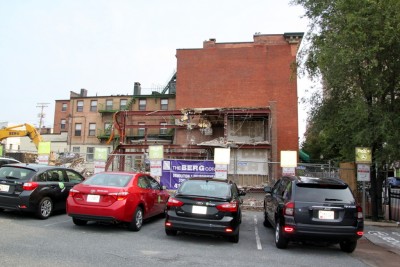 The owner of the adjacent parking lot, Fourth Gould LLP, is the current owner of 1010 North Charles. (Photo by Fern Shen)

“Baltimore’s architectural heritage was used imaginatively in the Chambers building,” they wrote. “The five strong, simply outlined arches are traditional in form [echoing the row-house doorways found across the street and throughout Baltimore], but the general design is contemporary.

“Handmade brick was used to keep the building consonant with its surroundings,” they added. “The construction is steel-frame with exterior load bearing walls. The windows in the arches open the showrooms to public view; the slots between are carried up to the [top] floor, where the firm’s offices and workshops are located, allowing light to enter and providing views of the street.”

After the death of the founders, the business was acquired by non family members, while the real estate stayed with the Chambers family, a group represented by Howard Chambers.

In effect, the Chambers design company became a tenant of the Chambers family. In 2005, the company vacated the Charles Street building and moved to the Montgomery Park business center on Washington Boulevard. It also has an office in Texas.

After the Chambers company moved out, Howard Chambers pursued several redevelopment plans that would have saved at least some of the building’s brick exterior. One plan was a bed and bath showroom that would have occupied the original building.

Another was a “boutique” condominium project that would have risen from the center of the property and retained its Charles Street façade. But a new development never materialized, and Chambers eventually sold the property to the Goulds.

Although the Chambers property is part of Baltimore’s Mount Vernon Historic District, which was created in 1965, demolition was permitted because the building wasn’t seen as “contributing” to the historic district.

According to Eric Holcomb, executive director of the city’s Commission for Historical and Architectural Preservation (CHAP), the panel in 2005 put the Chambers Building on a list of structures that were deemed to be “noncontributing” to the district, meaning that commissioners would not object to plans to substantially alter or replace them. Holcomb said that contributing buildings in the Mount Vernon historic district generally are those constructed between 1815 and 1945.

At least one CHAP member, the late Michael Murphy, argued that the Chambers building was worthy of landmark designation, but other commissioners didn’t back him up.

According to minutes from a 2012 CHAP meeting, the panel reaffirmed its decision that the Chambers building was a noncontributing structure in the historic district.

The staff report acknowledged that the Chambers Building was praised in 1964 as a “classic modern” design and that “the use of brick and arched openings was an attempt to harmonize with an older row house neighborhood.”

But it went on to say that “the scale and massing is unsympathetic to the much taller buildings in the district.” In addition, the report said, the building “lacks an articulated base, middle and cap, characteristic of historic buildings in the district,” is not similar in character to others in the Mount Vernon historic district and “does not contribute to the historic or scenic value that is significant to the Mount Vernon historic district.”

Hiser, the former Chambers principal, now a vice president with Whitman, Requardt & Associates, said he always marveled at the narrow glass slots, which gave the Charles Street façade a row house-like cadence while allowing light to enter the upper level.

Some architects might have used columns or pilasters to subdivide the front façade, Hiser said, but Richter used the opposite of columns – vertical voids that served as windows. “He dematerialized the box,” Hiser said.

Hiser said he also marveled at the thickness of the arched openings on the Charles Street façade, which he described as “barrel vaults.”

The touches that initially made the building so futuristic also contributed to its demise, Hiser said. Gadgets that were once state-of-the-art, he said, eventually became obsolete and difficult to replace.

In addition, it was shorter than other buildings on the block and didn’t fill out the lot, making it one of the smallest structures along that stretch of Charles Street.

“It was like you were walking into a period piece,” Hiser said. “But when you take it up to the 21 st century, it wasn’t code compliant. There wasn’t an elevator. There was a three-story open stairway. There was single-pane glass. . .It was a dinosaur. “

Hiser compares the Chambers building to a classic car from the 1960s. “It’s like seeing a beautiful old Cadillac sold for parts or trashed,” he said. “It was like an old Coupe de Ville or El Dorado.”

Hickman said the demolition contractor offered to let him have the first whack at the building with his equipment, but he declined. He did ask for 12 handmade bricks from the building, to give to Chambers employees who worked there.

“It was a great building for us,” Hickman said. “I don’t think it was entirely right for Mount Vernon, if you want to know the truth. If it was on a one-acre lot somewhere, I’d move back in a minute.”