Last night in South Baltimore, Mayor Stephanie Rawlings-Blake announced that the Banner Route of the Charm City Circulator had been granted a last-minute reprieve from the budget ax.

There were cheers at the Baltimore Museum of Industry’s waterfront outdoor pavilion, where Rawlings-Blake discussed her change of course before about 300 people.

But with city transportation director William Johnson saying last night that the wait between buses (“headways”) across the system could increase to as long as 30 minutes, it was unclear what the future holds for the popular but troubled Circulator service.

In online forums today, transit advocates greeted the announcement about the restored route (from Locust Point to the Inner Harbor) with some skepticism, particularly about increased headways.

The reprieve “seems more like a stay of execution,” one commenter said.
“30 minute headway means it is not a circulator,” another observed.
“This is known as the transit death spiral,” said the Maryland Transit Administration’s Henry Kay, commenting on the Baltimore Transit Facebook page.

The Banner Route already runs on about a 20-minute headway.

Increasing the headways to 30 or more minutes (about as fast as walking) some commenters said, would make riding the Banner impractical, and could ultimately lead to reduced ridership, potentially endangering the Banner route further down the road.

Rallying to Save Route

The route, which travels a short circuit around Fort Avenue, Key Highway and Light Street and links the Circulator’s north-south and east-west routes to the South Baltimore peninsula, was originally funded by federal grants to support tourism to the fort in honor of the 200th anniversary of the “Star-Spangled Banner.”

But that funding ran out more than a year ago and instead of canceling the route then, the city kept it operating, at additional expense.

Last month, city DOT said they were eliminating the route, setting off an uproar in South Baltimore.

While the Banner may have the lowest ridership of any in the city’s Circulator routes, it had some powerful supporters. (Among those signing a letter asking the mayor to save the Banner were developers Mark Sapperstein, Scott Plank and Richard Bozzuto, UnderArmour’s CFO Brad Dickerson, Visionary Art Museum director Rebecca Hoffberger.) 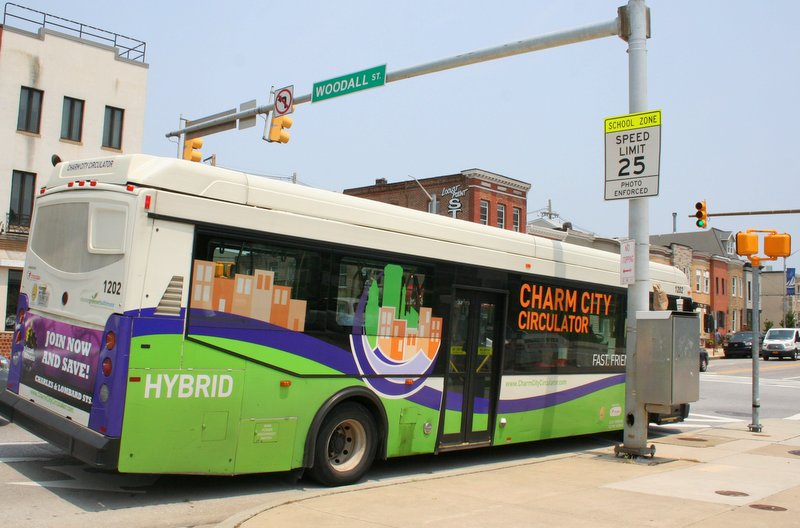 But according to Greg Sileo, president of the Locust Point Civic Association, last night’s crowd of seniors, families and young urbanites reflected the main source of the Banner’s support: the community.

“It has been a grass roots effort,” Sileo said, noting that residents got notice of the mayor’s meeting, convened by Councilman Eric T. Costello, only one day ago.

Sileo, who is running for the 11th district City Council seat, said the community has advocated for the route since the cuts were announced.

One reason for the advocacy is the peninsula’s severe on-street parking problems that are only getting worse with increased development.

The Banner Route, residents say, ameliorates them, connects the peninsula to the rest of downtown and makes the area more walkable. 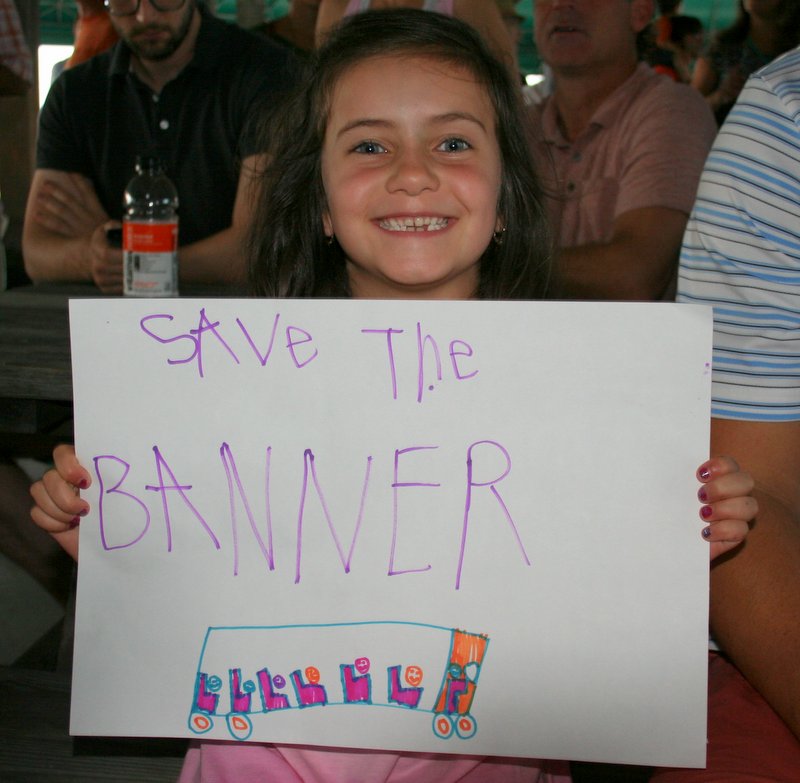 Malena LoPresto  of Locust Point, shows her “Save the Banner” poster.

Malena LoPresto, who lives in Locust Point, brought a “Save the Banner” sign to the meeting.

“We take the Banner to go to the Yogi Castle frozen yoghurt at McHenry Row,” her mom Jennifer LoPresto said. “We also take it the grocery store and the Inner Harbor.”

Malena’s father, Patrick LoPresto, was more blunt: “It helps us feel better about the taxes we pay.”

Dan Greenstein, who lives  down the street from the museum, off of Key Highway, said the Banner Route is the best transportation the peninsula has.

“I take it to downtown and to O’s games,” he said. “It runs more often than the number 1 bus.”

More than 800 senior apartments are located on the South Baltimore peninsula.

Representatives from the various senior citizen apartment complexes, such as Christ Church Harbor Apartments, were also involved in advocating for the Banner and many attended the meeting. 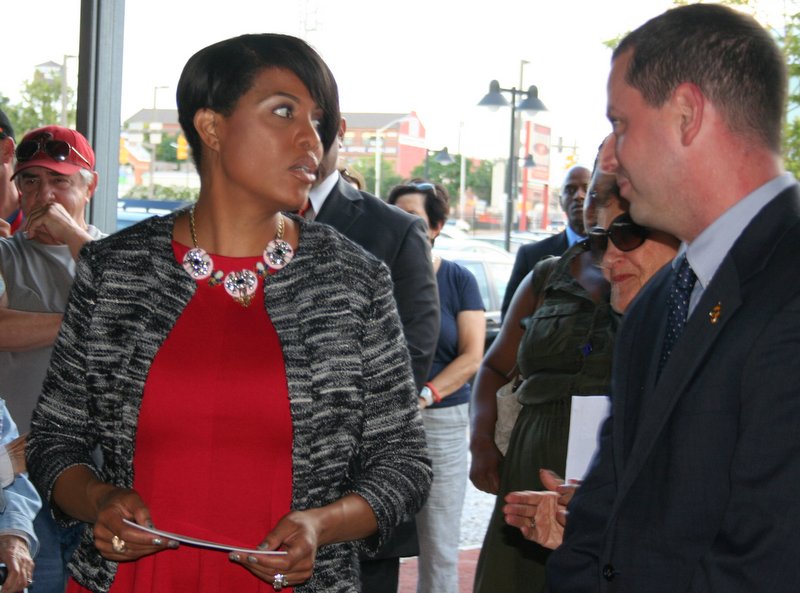 In her short speech, Rawlings-Blake said the Circulator fills a “critical need” for public transportation, saying this was especially true in light of Gov. Larry Hogan’s recent announcement that Maryland would not fund the city’s Red Line light rail project.

That setback, she said, caused her to “redouble” her efforts to support the Circulator and take “another look” at the Banner Route.

She credited Johnson and Department of Finance director Henry Raymond with finding funding for the route, saying that Raymond could “turn a dime into 20 dollars.”

Rawlings-Blake also singled out Costello for being a “relentless” advocate for the Banner Route.

As for where the funds were found to restore the Banner route, the mayor did not offer details.  Her Facebook page said that the city was funding the Banner for fiscal 2016 by “taking a hard look at our finances” and “creatively utilizing some forthcoming funds to offset differences.”

A mayoral spokesman has said that money for continuing the Banner Route will come from delaying payments on Circulator debt and delaying the purchase of new Circulator buses – both thorny issues to those who understand the Circulator’s history of financial and operational troubles.

The city is still paying for the original Circulator buses, many of which have mechanical problems that are so substantial they are no longer in service.

A consultant recently urged the city to replace the oldest buses in the fleet immediately because having them is detrimental to attracting quality bidders to run the Circulator.

The Circulator is currently operated by Transdev (formerly Veolia), but the city is rebidding the Charm City Circulator contract this year.

After the announcement, Councilman James B. Kraft, who represents the first district in southeast Baltimore, told The Brew a different story about where the money came from.

Kraft, who has advocated for a Circulator for the southeast, said that as the City Council pored over the budget supplementals during the past few weeks, it was Costello who was able to find the money, incrementally.

“We were going through the supplemental budgets. there were different sections with fund balances in there. $20, 000 here $20,000 there,” said Kraft.

“Eventually he said, ‘I think I have enough for the Circulator,’” Kraft said.

Johnson said that the public meetings about the Circulator changes are still taking place and systemwide route changes, originally scheduled for July 20, will be postponed.

He told the crowd that while the Banner would remain in service it would now have peak and non-peak service hours.

During off peak hours the Banner would operate more like a shuttle with “less frequent” service, he said.

Johnson urged residents to come to the meetings where he said all their questions would be answered. 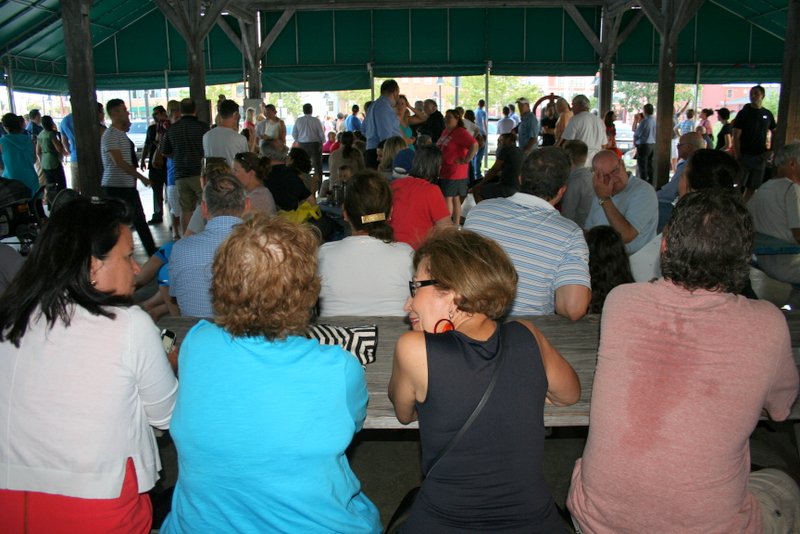 About 300 residents came to the Museum of Industry’s pavilion to tell the mayor how important the Banner Route is to South Baltimore.