Warning of fatal derailments, explosions, spills and toxic chemical releases, activists converged on City Hall Wednesday for a city council hearing on a relatively new phenomenon – thousands of gallons of crude oil being shipped through Baltimore by train.

“No more oil trains!” “No bomb trains!” the crowd of several dozen chanted.

They gathered around posters showing the dates and locations of previous incidents, including the derailment and explosion in Quebec in 2013 that killed 47 people and one in Lynchburg, Va., that spilled thousands of gallons of oil into the James River.

Speakers said about 165,000 Baltimore residents, including the occupants of City Hall, are within the potential oil train “blast zone,” the one-mile evacuation zone recommended by safety officials in the case of a derailment and fire.

“It’s all for the benefit of dirty energy. Oil trains are an equal opportunity danger and it’s one we ignore to our peril,” said Pastor Amy Sens, of Morrell Park, a United Church of Christ minister who addressed the crowd.

Chairing the meeting, City Council Vice President Edward Reisinger said the hearing was meant to address citizen concerns about oil shipments through the city in the wake of derailments that have occurred elsewhere. In addition to citizens and representatives of environmental groups, state transportation department officials, city fire department officials and state lawmakers attended.

A boom in domestic and Canadian oil production in recent years has meant a significant increase in the number of crude oil tankers traveling through the  country. But just how much is passing through the city has been difficult to determine.

During the 2015 legislative session, Del. Clarence K. Lam introduced legislation that would have required rail companies to disclose the route, frequency and volume of crude oil being transported by rail through Maryland. 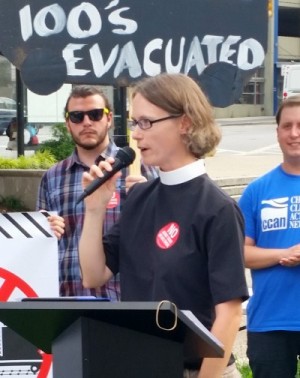 Rail companies CSX and Norfolk Southern, who did not send representatives to the hearing, have sued the state to prevent the public release of this information.

“There’s actually a lot of oil that rolls by on our rail-lines, particularly here in Baltimore,” he said. “That means there’s a greater risk of derailment, greater risk of loss of life, of loss of property. More and more tanker cars are going through densely populated areas.”

Lam cited media estimates that millions of gallons of crude oil are already transported annually to an export facility in the Fairfield/Brooklyn area of South Baltimore.

The city has taken some measures to prepare for a possible derailment, including extra training and stockpiling firefighting foam, according to testimony by Mark Wagner, assistant chief of operations for the Baltimore Fire Department.

But Robert Maloney, director of the Mayor’s Office of Emergency Management, said that a potential fire may be too dangerous or environmentally devastating to actively fight against.

Wagner noted that there is no requirement for railway companies to report the contents of their cars to local fire officials ahead of time, disclosure the rail companies argue would be a security risk.

Tanker design was also discussed, with speakers schooling the committee on the differences between older tank cars, DOT-111’s, known to be ill-suited for transporting flammable liquids, and the safer, thicker-shelled DOT-117’s.

A state Department of Transportation safety official  observed that, even with the newer models, at 50 miles per hour, there is still a chance of puncture and/or conflagration with them.

Fred Millar, an independent rail safety expert, said the sturdier cars would make a difference in safety and denounced the federal government  for failing to require them.

“The DOT-111’s have been known for 20 years to be inadequate. . . and the federal government never regulated them,” Millar said. “But now that they’re blowing up all over the place they want to regulate them.”

Fumes as Well as Flames

Speakers said the oil tanker cars are not only dangerous due to their potential explosiveness, but also due to the high number of carcinogenic or other toxic chemicals they contain. 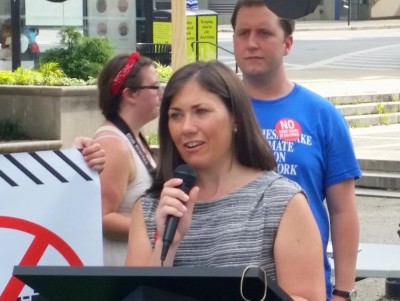 Trisha Sheehan said she worries about her family’s exposure to toxic fumes. Addressing the rally, Sheehan said they lived near a 2012 train derailment that occurred in Paulsboro, N.J., sending four rail cars  into a creek, causing one to rupture..

“My family knows what it is like to be impacted by a train derailment. I now have a five-year old son at home, who has lingering health effects from his exposure a toxic chemical that filled the air after a train had derailed in a nearby town, leaking 23,000 gallons of vinyl chloride,” said Sheehan, the regional field manager of a group called Moms Clean Air Force.

“Vinyl chloride is a carcinogen,” she said. “A day doesn’t go by when I don’t wonder if we will get cancer and how soon it will happen.”

The activists acknowledged that city government has limited authority over interstate transportation by rail.

Mike Tidwell, director of Chesapeake Climate Action Network, asked the Council to do what they could by placing a moratorium on city approval of permits for oil shipping terminals in the city until the risks are further studied. He noted that Vancouver, Wash., and Albany, N.Y., have imposed such moratoriums.

The state has already acted to slow down the oil train activity. In June the Maryland Department of the Environment denied a Houston-based company’s application to allow crude oil to be shipped through its port of Baltimore terminal in Fairfield.

With residents saying the shipments would pose a safety threat, the state is saying it cannot issue a permit without more information from Targa Resources, a company that  handles and stores oil, natural gas and petroleum products.