The Baltimore Development Corp. has distributed $417,000 to help property owners and businesses recover from physical damage incurred during the Baltimore riots and looting last April.

As of yesterday, 47 applicants received nearly $128,000 for repairs and improvements to damaged storefronts, and 14 businesses received more than $289,000 in business recovery loans, BDC President William H. Cole reported to board members during its monthly meeting today.

Eight of the 14 recipients of business recovery loans also got facade improvement grants, according to Cole.

The quasi-public city agency still has a few funding requests in the pipeline, but most of the businesses received money shortly after applying – sometimes within two days. “That’s a big number of businesses that were able to get a check a short time after their application,” Cole said.

“It sounds like a real success story of bouncing back,” commented BDC board member and former Baltimore mayor Kurt Schmoke.

The bulk of the rioting occurred on Monday, April 27, eight days after Freddie Gray died due to injuries received while in police custody.

Although much of the media coverage focused on areas such as Mondawmin Mall and Penn North, businesses in Mt. Vernon, Bolton Hill, East Baltimore, Highlandtown, Canton and Hollins Market, among other neighborhoods, reported break-ins and damage.

Cole said that BDC representatives fanned out across the city immediately after the riots and made contact with more than 400 businesses that had “some sort of physical damage” related to the unrest. 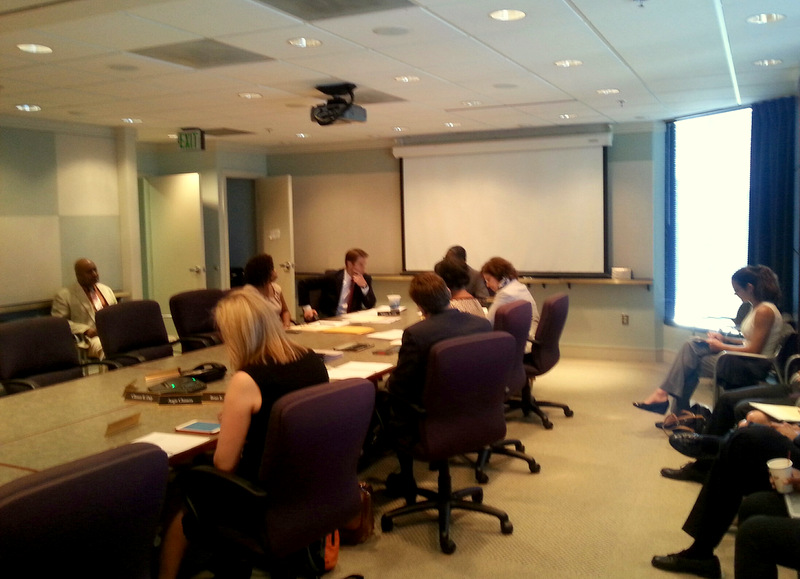 Today’s BDC board meeting. Many members participated through a conference call link-up. (Photo by Ed Gunts)

“Virtually everybody here [at BDC] played some role in going out into the city,” he said.

BDC is just one source of funds available to businesses after the riots. There are also loans available through the U.S. Small Business Administration and the state of Maryland.

Cole said  he did not have figures on the amount of loans approved by the SBA and the state.

He said SBA loans may have been more difficult for some applicants to obtain because they were structured much like conventional loans, and companies that didn’t have much equity in their businesses, or weren’t showing a profit, may not have been able to qualify for assistance.

“I don’t think many of the SBA loans ended up closing,” he said. “We don’t have the numbers, but we know anecdotally that many of them didn’t close.”

An existing facade improvement program provided the source of funds for the storefront repair grants. Donations made by Greater Baltimore Committee members and others were used for the business recovery loans.

He said BDC has more or less exhausted its emergency fund and will make another appeal for donations if necessary to help additional businesses.

“The minute we get the money, it goes right back out,” he said of contributions to the business recovery loan fund. “There’s no overhead here. All the money goes back out. The goal is to raise as much money as we need to serve the businesses.”

Cole: Most Businesses are Back

Cole told BDC board members that among those businesses contacted by BDC, “90% or more have reopened in some capacity or another” after the riots.

In some cases, he said, the operation may be slightly different, due to difficulties in obtaining certain seasonal inventory items and other issues related to the specific business.

Cole said BDC is working with the CVS and Rite Aid pharmacy chains as they go through the city permitting process to rebuild nearly a dozen stores damaged by the riots.

He added that he visited Mondawmin Mall shortly after the April 27 riot there and was impressed by how quickly management got the property repaired and reopened.

“It looked great,” Cole said. General Growth Properties, the owner, “did an amazing job in cleaning it up.”