Baltimore has become the second deadliest city in America (after St. Louis) with homicides surpassing those of Detroit, the longtime poster child for urban violence.

During the first seven months of 2015, Detroit police reported 163 slayings. That compares to 189 killings recorded through July in Baltimore.

With 10% fewer residents than Detroit, Baltimore’s current homicide rate (deaths per 100,000 people) is running about 26% above that of the Motor City.

That’s quite a reversal from the recent past.

In 2012, Detroit had 411 homicides compared to Baltimore’s 219. The following year, Detroit had the highest murder rate among larger U.S. cities, according to the 2013 Uniform Crime Report published by the FBI, while Baltimore came in fifth (behind Detroit, New Orleans, Newark and St. Louis). 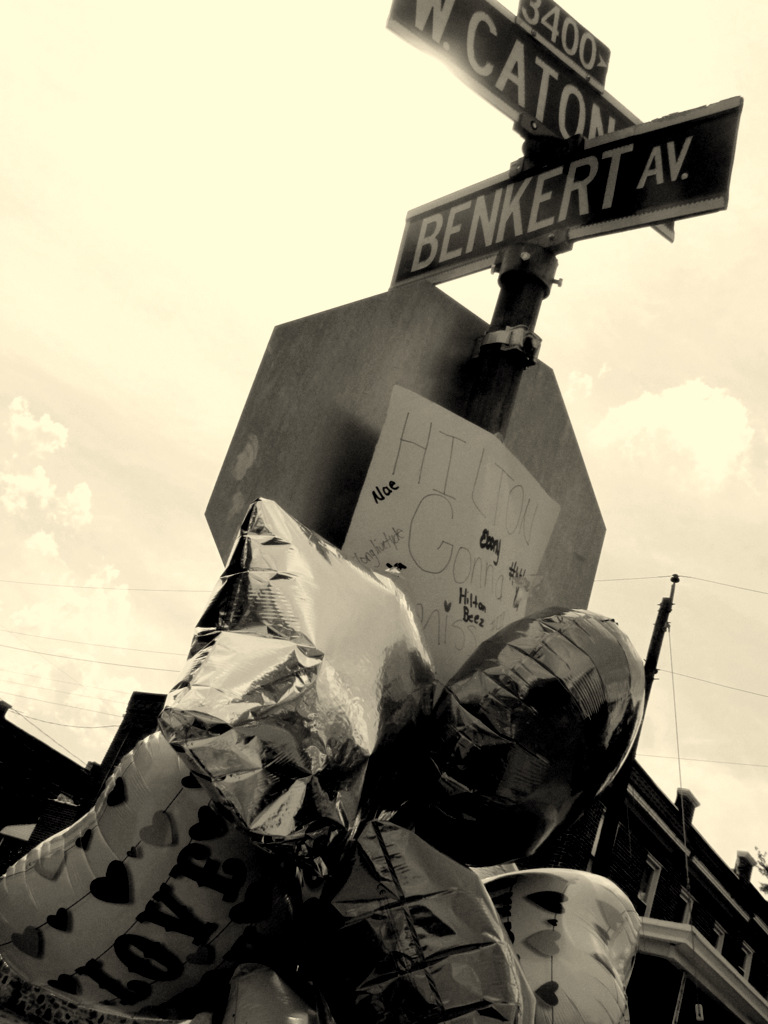 A memorial to 19-year-old Tyrin Diggs Jr., who was gunned down in West Baltimore on the night of May 22. (Photo by Mark Reutter)

But the surge in violence that followed Freddie Gray’s death and the April 27 riots – capped by 45 mostly gun-related homicides last month – has placed Baltimore at the forefront of deadly cities in America.

A Baltimore Brew review of online police records at other large cities indicates that Baltimore has become the second most violent city in America, following St. Louis.

While other cities have experienced an increase in killings this year – including Chicago, New York City and Washington – none has spiked to the level of Baltimore (with the exception of St. Louis and Milwaukee).

On the other hand, several cities with traditionally high murder rates – such as Oakland and Newark – have reported no significant increase in slayings so far this year, while one notable crime hot spot – Camden, N.J., – reported a 20% drop in homicides compared to the same period last year.

Here is a breakdown of 2015 homicides in U.S. cities gleaned by The Brew from online police records. Additional information came from the Major Cities Chiefs Police Association.

The list below is arranged by level of violence – going from the city with the highest homicide rate to the lowest.

It does not include all major U.S. cities, but instead is a sampling of 20 cities, including those with a historically high number of slayings.

PLEASE NOTE that the figures below are half-year totals, which means that if fatalities continue at their current pace, the full-year homicide rate for these cities would be roughly double the rates listed below.

Even as violent crime hangs heavy over many parts of Baltimore, its causes remain elusive and subject to multiple explanations.

Earlier this week, Davis joined police chiefs from around the country who met in Washington to discuss the surge in violence.

After the private meeting, which was sponsored by the Major Cities Chiefs Police Association, several of them spoke to reporters.

No longer are homicides a solitary affair between a shooter and a victim, according to Lanier and other chiefs. Increasingly, urban murders involve gunplay between multiple persons armed with sophisticated weapons. 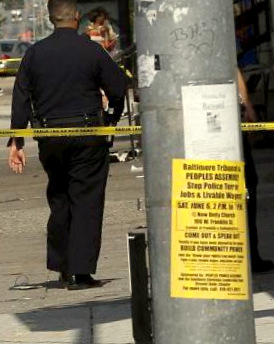 A closeup of the crime scene at the top of this story shows another piece of Baltimore’s murder puzzle – a deep mistrust of local law enforcement with a flyer denouncing “police terror.”

The rise of Al Capone-style shootouts are underscored by the higher number of victims being shot at a crime scene.

This happened most recently in Baltimore last Sunday (August 2) when seven people were shot at the same time on West Garrison Avenue in Park Heights.

There were no fatalities  – all the victims were shot in the leg, possibly as a warning.

Police in Baltimore and nationwide say they are finding more weapons with high-capacity magazines.

In Chicago, police have made 22% more gun arrests in 2015, but murders still have risen by 21%, according to the Major Cities Chiefs group.

In Baltimore – where a deep mistrust of police is shared by many residents in poor neighborhoods and the city Board of Estimates routinely doles out millions of dollars a year to privately settle police brutality cases – Freddie Gray’s death detonated a night of violence and looting on April 27.

With more than 30 pharmacies broken into by looters, roughly 300,000 doses of prescription drugs and opiates were stolen, Shawn Ellerman, an assistant special agent at the Drug Enforcement Agency (DEA), told reporters.

Baltimore police said they have arrested an increased number of offenders who were under the influence of drugs, but that number appears to be decreasing as the cache of stolen drugs is exhausted.

What continues to dog city police is their inability to find and arrest suspects in the recent slayings.

The current homicide clearance rate is 36.6%. That’s below the department’s mid-40s average and far worse than the national average of 65% of murder cases “cleared” by a suspect either held in custody or subject to an arrest warrant.

Earlier this week, Commissioner Davis announced that 10 federal agents will be “embedded” in the homicide unit to help city police with the backlog of unsolved homicides.

Already 20 agents from the federal Bureau of Alcohol, Tobacco, Firearms and Explosives (ATF) are working with city detectives, and a full-time FBI analyst is assigned to BPD’s analytical intelligence section.

Davis also disclosed a major reorganization of the department’s command ranks, which included the reshuffling or retirement of several high-ranking officials.

This comes in the wake of several reorganizations implemented by Batts during his nearly three-year tenure as Baltimore’s top cop – and the dismissal by Mayor Rawlings-Blake of the top leadership of her Office on Criminal Justice in May.

Mosby recently criticized the mayor’s office for authorizing a Homicide Review Commission – which included $244,000 awarded to the Johns Hopkins Bloomberg Center for Gun Policy and Research on June 10 – when “we know why homicides are taking place.”