Michael E. Cryor, director of OneBaltimore, said it will take “5, 10, 15 years to realign our culture, our expectations, our preparations, if Baltimore is to move in the direction we want.”

Making his first major public remarks as head of the private-public partnership set up by Mayor Stephanie Rawlings-Blake following the April riots, Cryor said his group’s goal is help Baltimore become “the No. 1 city in America per capita” in creating high-tech jobs.

“That’s a big commitment, but I’d rather fail trying than not to try,” he told the City Council’s Education and Youth Committee yesterday.

“The people in Baltimore are enormously capable of doing extraordinary things,” Cryor added, but then cautioned, “We operate in silos. We’re going to have to find a way to build a culture of collaboration. . . to scale what we know how to do.”

He said OneBaltimore is in the process of securing millions of dollars through grants and private partnerships, including with some well-known organizations whose names couldn’t yet be publicly disclosed.

He cited “a major developer and utility company” that have pledged to build a job training facility within the next two years and a program planned by IBM to train high school students in computer technology.

What’s more, he said, his group is actively engaged with the Obama administration in trying to secure more resources for Baltimore.

A veteran public relations man who chaired the Maryland Democratic Party and is credited as the architect of ex-mayor Martin O’Malley’s Believe campaign, Cryor said after the hearing he was working on the campaign full-time as a civic duty and without pay.

As part of the mayor’s charge to take a comprehensive approach to the city’s problems, OneBaltimore plans to investigate the history of inequality in the city, Cryor said.

The group will also examine the specific tensions between black neighborhoods and the police that exploded in the wake of Freddie Gray’s death while in police custody. 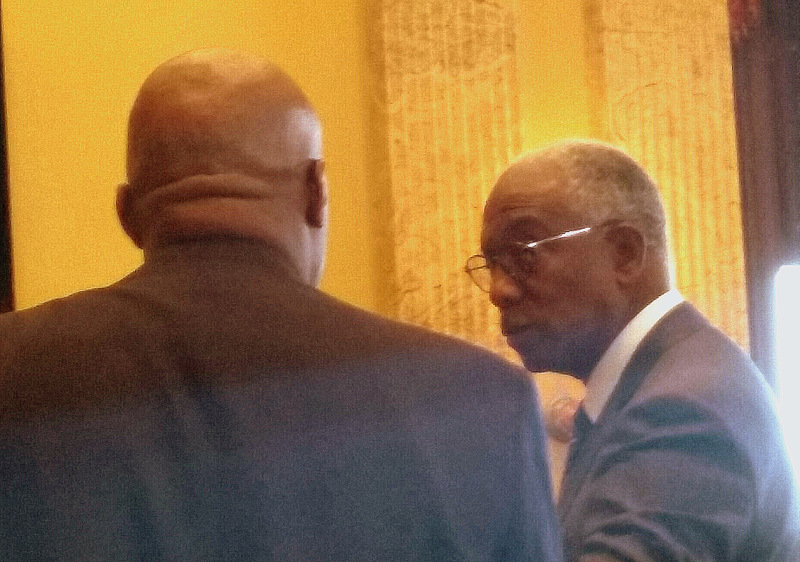 Pressed by Gerard Joab, director of the St. Ambrose Housing Aid Center, about his immediate goals, such as expungement of the records of ex-offenders so they can apply for jobs, Cryor said that was an important issue that needed further dialogue.

Queried by activist Kim Trueheart about the group’s commitment to young people, Cryor agreed that youth was at the top of his priorities.

Asked how the group will establish performance benchmarks, Cryor spoke of the need to assure transparency among the groups involved in OneBaltimore’s efforts.

“I really need you,” he told an audience of about 80 people several times. “The door is wide open.”

An immediate issue that OneBaltimore needs to tackle, Councilwoman Mary Pat Clarke told him, was coordinating a citywide mentoring program.

“We saw a huge increase in the number of people who want to mentor” following the riots, Clarke said. “People desperately want to be part of something that makes a difference, but don’t know where to go. When can we see a citywide mentoring platform happen so people can be part of it?”

Cryor said such interest, while greatly welcomed, “also shined a light on how we can make sure that we better channel these people and how to make sure all those individuals are trained and supported.”

He said a task force was formed this week to examine what areas of the city are most in need of mentoring and what skill sets are required by participants.

“I leave it in your hands,” Clarke told Cryor, saying that if people “drop out” because the program doesn’t roll out soon enough, “that’s a horrible outcome and we can’t let that happen.”

Cryor said he hoped to make announcements in the next 30 days about specific programs in job training, education and neighborhood investment that will be instrumental in the “renaissance of this city.” 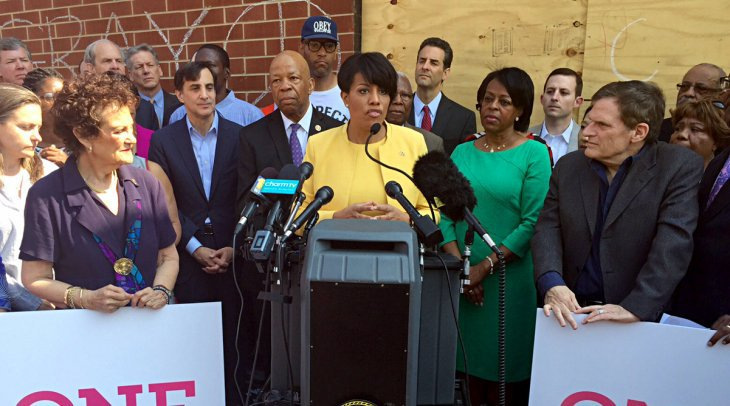 Mayor Rawlings-Blake announces the formation of OneBaltimore a week after the April riots, saying it will focus on a comprehensive and collaborative program to rebuild the city. (Mayor’s Office, Mark Dennis)