Former Episcopal Bishop Heather Cook could spend up to 10 years in prison for causing the death of 41-year-old bicyclist Thomas Palermo on Roland Avenue last December.

One day before her trial was to begin, Cook pleaded guilty today to four charges: auto manslaughter; leaving the scene of a driving accident involving a fatality; driving while intoxicated and texting while driving.

In the State of Maryland v. Heather Cook, the former bishop initially faced 13 charges. The other nine charges against Cook will not be pursued under the state’s recommendations. They range from traffic violations to homicide by motor vehicle while driving under the influence of alcohol.

Associate Judge Timothy Doory, who is presiding the case for the Circuit Court for Baltimore City, set October 27 as the date for sentencing. He said the sentence he imposes can be as much as the state recommended or less, but he cannot impose more prison time.

Cook, wearing a tan dress, said little during the hearing, which lasted less than an hour. Her attorney, David Irwin, mostly spoke for her. Her answers to the judge were primarily “Yes Sir” and “No Sir.” 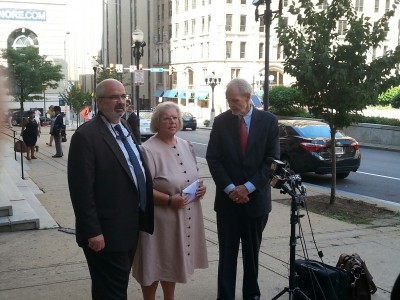 Doory told Cook she might have more options to defend herself if she requested a trial, and he asked Cook if she was sure she wanted to waive her right to a trial and enter guilty pleas instead.

Her response was “Yes, your Honor.”

“Very well. I think you know what you are doing,” he told Cook after an attorney for the state read the four charges. “That statement of facts is sufficient for me to find you guilty.”

Doory added that he will wait until the October 27 hearing to determine Cook’s sentence. As part of the hearing, he said, Cook’s defense team can solicit character references and other testimonials about Cook to make a case for why she should serve less time than the state recommends.

“I do not know the sentence you are going to receive,” Doory told Cook. “It will be based on the facts today and the statements that come in. “

Reciting those facts today, prosecutor Kurt Bjorklund retold how Cook, driving her green Subaru wagon, had swerved into the Roland Avenue bike lane that Sunday, while texting and drunk, striking Palermo and then driving away from the scene.

She returned more than 30 minutes later, Bjorklund said, and blew a .22 on a breath alcohol test, nearly three times the legal limit.

It was a shocking turn of events for the 58-year-old Cook, who had recently been made a bishop, the first woman to hold that position in the history of the Episcopal Diocese of Maryland.

Also attracting notice was Cook’s past history of drunk driving: in 2010 she was stopped on an Eastern Shore road and found to have marijuana and liquor bottles in the car and a blood alcohol level that was more than three times the legal limit.

The police report had included a description of how one of Cook’s tires was flat and shredded and how there was vomit on her shirt.

The diocese was criticized for failing to disclose details of the previous DUI to the search committee that selected Cook to serve as “Bishop Suffragan,” the second-highest position in the diocese.

Cook “would love to say something”

After the hearing, Irwin, Cook and defense attorney Jose A. Molina held a short question and answer session with the media outside the Clarence Mitchell Jr. Courthouse, but Cook did not speak at all and again deferred to Irwin.

Asked if Cook is ready to go to prison, Irwin replied. “I’m not sure anyone is ever ready to serve time in jail…The state’s recommendation is certainly a very heavy one. “ 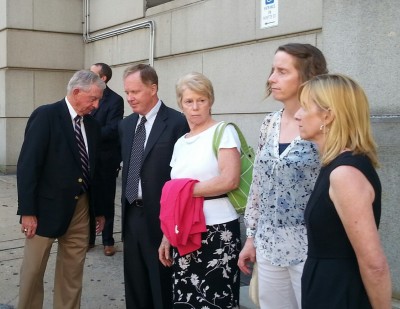 The Palermo family outside the courthouse after Cook’s plea. (Photo by Ed Gunts)

Asked if Cook is sorry for what she did, Irwin said: “My client …and all of us cannot express in words the sadness that we feel for the Palermo family…There are no winners in this case, only losers.”

Half a dozen family members gathered for a mini-press conference after the hearing. Alisa Rock, the sister of Palermo’s widow, read a statement saying the family would like to see the judge impose the maximum sentence recommended by the state.

Rock declined to comment when asked the family’s reaction to the state’s recommendations.

Irwin said Cook is living on the Eastern Shore, is seeing a therapist and has not been diagnosed with any disease other than alcoholism.

He said Cook will spend much of her time between now and October 27 preparing for the sentencing hearing.

Irwin said he advised Cook not to speak about the case until then. “She would love to say something, but I won’t let her…Ms. Cook will say something on October 27, the date of the sentencing.”