No municipal projects or programs will be cut or eliminated because of the city’s decision to pay $6.4 million to the family of Freddie Gray.

City officials went to great lengths yesterday to emphasize that city programs won’t be adversely affected by the settlement and suggested that the payment actually may save taxpayers money in the long run by helping the city avoid costly litigation that could go on for years.

With that assurance, the Board of Estimates, the city’s spending panel, voted unanimously to approve a request from the Law Department to pay $6.4 million to the heirs of Freddie Gray, who died April 19 after suffering injuries when he was taken into police custody on April 12.

Gray’s death triggered riots and looting around Baltimore in April and cast an unflattering national spotlight on the city’s ills. It also led to six police officers being charged with various crimes in connection with Gray’s death.

Those cases are pending and separate from the civil claim. 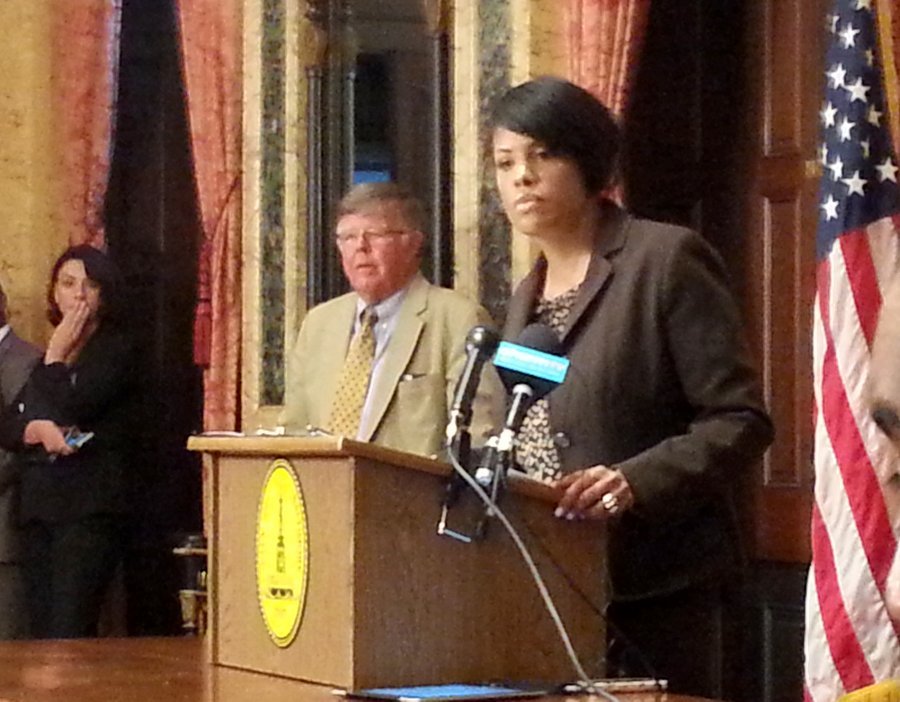 “There is no possibility of bringing back a loved one, but I hope the settlement will bring a measure of closure to Freddie Gray’s family and friends,” Mayor Stephanie Rawlings-Blake said at the Board of Estimates meeting Wednesday morning.

“I want to offer my sincere condolences to Freddie Gray’s family and friends,” she said during a City Hall press conference afterwards.

“This settlement is about making the right fiscal decisions for the City of Baltimore,” she said.

The claim was brought by the Estate of Freddie C. Gray Jr., Freddie Carlos Gray Sr., and Gloria Darden against the City of Baltimore and the Baltimore Police Department.

Money for the payment will come from a pool of funds the city has set aside to settle law cases, using funds from previous settlements, explained Deputy City Solicitor David Ralph. As a result, funds paid to settle the Gray claim “will not impact the city’s operations or budgeted programs,” he said.

The money is in hand, he told the board.

Rawlings-Blake said the settlement is a matter of exercising “fiscal responsibility”  because it will help the city avoid potentially costly litigation in the future.

Deputy City Solicitor Ralph said the settlement is not an admission of guilt on the city’s part. He and city solicitor George Nilson noted that the city likely would have been required to spend funds to defend the city in court if a civil trial did take place.

“There are many facts and legal issues in connection with this case which are complex and hotly disputed,” Ralph wrote to the board.

“The proposed settlement does not resolve any factual disputes surrounding the events of April 12th and expressly does not constitute an admission of liability on the part of the City, the Baltimore Police Department or any of the police officers who interacted with Mr. Gray on that day.

“Importantly, this settlement has nothing whatsoever to do with the criminal proceedings now underway,” he continued “The purpose of the city settlement is to bring an important measure of closure to the family, the community and the city, and to avoid years and years of protracted civil litigation and potential harm to the community and divisiveness which may likely result. The settlement takes into consideration the totality of the unique circumstances surrounding and following the death of Mr. Gray and seeks to bring complete resolution to this matter.”

Since 2011, the city of Baltimore has paid more than $6 million to settle more than 120 cases of alleged police misconduct, according to The Baltimore Sun.

City solicitor Nilson called the settlement “substantial and affordable” and also stressed that “no public programs or projects will be affected in any way as a result of the settlement.”

Nilson said the city reached the $6.4 million figure after considering other local cases, cases in other cities (including the recent $5.9 million settlement in New York involving Eric Garner, who died in police custody after repeatedly shouting “I can’t breathe”) and the specifics of the Gray case. He said negotiations with the family took three and a half months and were concluded by the end of August. He declined to say what monetary figure was discussed when the talks began.

Nilson said he believes the circumstances of the Freddie Gray case are so “extraordinary” that they are not likely to become a precedent for other cases.  “We don’t think it is likely to repeat itself.”

City attorneys and elected officials acknowledged that is rare for the city to reach settlement in a civil claim before any criminal cases are adjudicated, but they said it was a strategic move in this particular case.

City Council President Bernard C. “Jack” Young, who serves as chairman of the Board of Estimates, said the costs to the city could have been much higher had the city not settled the claim and the matter went to civil court.

“My duty, as a legislator and fiscal agent, is to consider the costs associated with litigating a potential civil suit and to decide whether it’s in the best interest of taxpayers to pursue a settlement or a protracted court case,” Young said in a prepared statement.

“After meeting Friday with attorneys for the City of Baltimore, I agreed that litigation in federal court, where judgments are uncapped, could cost taxpayers millions of dollars to defend, and might result in an award that could dwarf today’s $6.4 million settlement agreement,” he continued.

“There is no single solution that can resolve all the matters that our City must address in considering the death of Mr. Gray and the impact of recent events,” said City Comptroller Joan Pratt, who also serves on the Board of Estimates.

Billy Murphy, the attorney for the Gray family, did not appear before the Board of Estimates and did not immediately make a statement about the settlement.