A new report from the city Department of Transportation recommends the city expand the Inner Harbor Connector, adding ferry landings with parking to give commuters the option to park and ferry to work at Canton, Harbor Point or downtown instead of driving all the way.

Among other proposals in the report is the addition of a new ferry landing for Harbor Point, where Exelon headquarters is slated to open in November of 2016.

The Inner Harbor Connector, the free ferry arm of the Baltimore’s Charm City Circulator, has seen its average daily ridership increase 47% since the service began in 2010, according to the 71-page document.

The authors suggest the service is playing a role a role in traffic mitigation.

Its three routes (Harborview to Harbor East; Canton Waterfront Park to the Isaac Meyers Maritime Park in Fells Point; and Maritime Park to Locust Point) transported 210,000 passengers last year – more passengers than the Water Taxi, many to jobs at Under Armour in Locust Point, which has its own ferry landing. 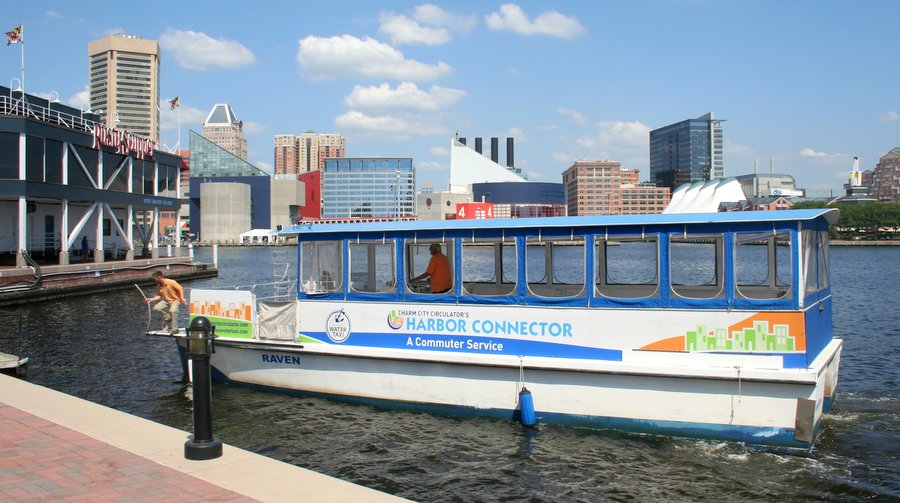 Inner Harbor connector “Raven” getting ready to dock at the Rusty Scupper about 1 p.m.before making its five-minute crossing to Harbor East. (Photo by Danielle Sweeney)

The report, prepared with the assistance of consultants Whitman, Requardt & Associates, recommends that two of the ferry routes (Harborview-Harbor East and Canton Waterfront Park-Locust Point) be reduced to peak-hour only to serve the maximum number of riders at the lowest cost. This cutback would save the city $130,000 a year.

It recommends adding, on a trial basis, a new Connector route from Canton Waterfront Park to Maritime Park/Harbor Point, which would be paid for with impact fees and employer contributions.

The city’s costs to transport Connector passengers vary according to route and time of day – with a low of $1.06 per-trip during peak hours and a high of $23.31 per-trip for midday rides (based on the report’s study period). An average weekday trip (one way) costs the city about $3.40.

To improve the Connector’s long-term financial stability (the report did not indicate the Connector had any debt, unlike the Circulator) the report suggests establishing a fare within the next three-five years and charging $5 for a day pass.

The connectors are funded primarily through the city garage parking tax, state grants, business contributions and impact and development contributions. The Water Taxi operator is paid $16,810 per-boat-route, per-month in addition to fuel costs to operate the service under contract.

The city supplies two ferries, the “Raven” and the “Oriole,” both paid for with $1.6 million in federal funds. The Water Taxi provides a third smaller vessel.

A fourth electric-powered Connector vessel will be funded by a USDOT grant of $854,000, plus $150,000 from the city in the near future, according to the report. 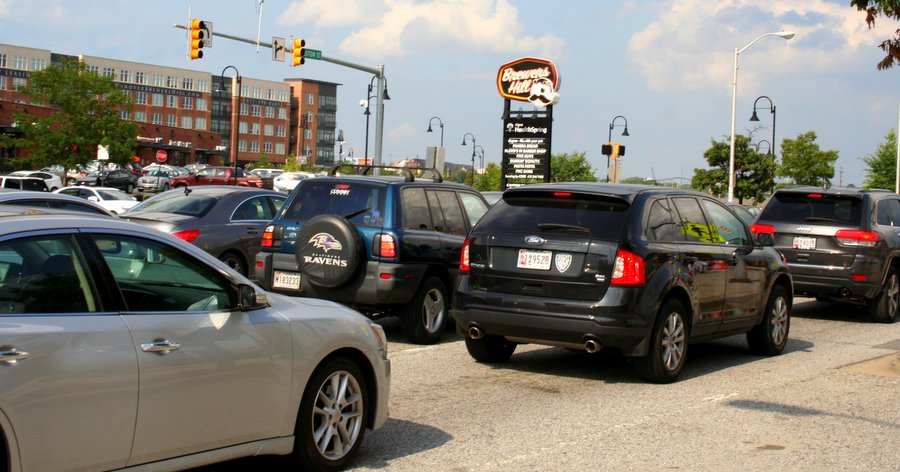 The proposal suggests that I-95 commuters who work at Harbor East, Harbor Point, or Downtown park in Canton or Riverside, in designated lots and ride the ferry to work instead of driving the last few miles on clogged city streets not designed for large traffic volumes.

“It’s a great way to capture people coming off of 95 north,” said Laurie Schwartz, director of the Waterfront Partnership, who is a member of the Downtown Traffic Mitigation Workgroup.

“Not every commuter will do this, but the more ways we offer people to get to work the better,” Schwartz said. “Its definitely a peaceful ride and better than driving through Canton during rush hour.”

If the ferry saves commuters time, they are likely to try it, she said, speaking with The Brew.

The Harborview-to-Harbor East ferry route takes about five minutes (not including wait time) to cross the Patapsco. Conversely, driving the mile or so from Harbor East to Key Highway can take 30 minutes or more, especially on game day during rush hour. 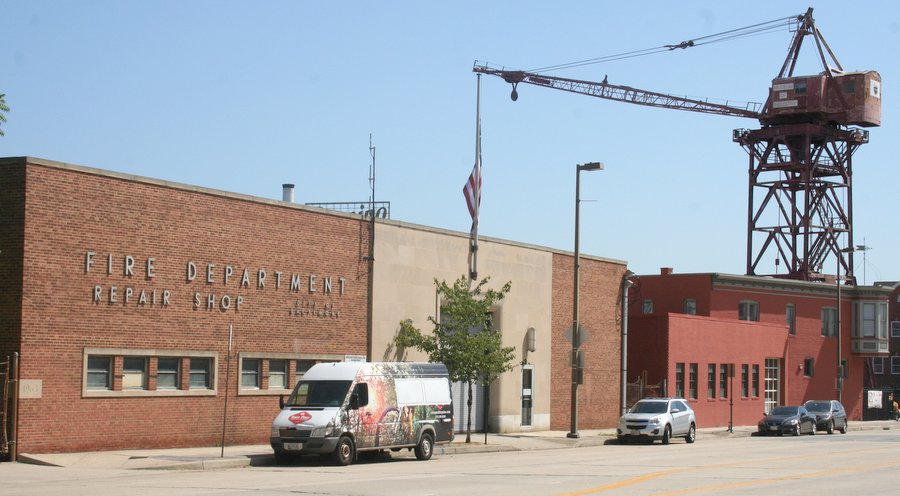 But the most important factor in attracting commuters is nearby off-street parking.

The report examined ferry landing and parking lot options at several sites, from Canton to Westport and Cherry Hill.

In the short term, within the next two years, it recommends fee-based commuter ferry parking be constructed in the Riverside/Locust Point Key Highway area to keep commuter cars out of nearby parking-challenged neighborhoods.

One site suggested for parking is the Fire Department Repair Facility on Key Highway, next to the Museum of Industry. Another possible option is a lot on Beason Street off of Key Highway currently used by Under Armour as a warehouse.

Greg Sileo, president of the Locust Point Civic Association, says the community welcomes more transit options, but is concerned about impact on nearby neighborhoods. Locust Point, about five blocks from Riverside, already has one ferry landing and deals with parking problems.

“There is already some concern that in Locust Point has become a ‘park and ride’ for people commuting from Locust Point to Harbor East,” he said.”People park their cars and just go. Hull Street and Haubert Street get the brunt of it.”

An off-street parking lot for ferry commuters would be welcome, Sileo said.

The parking garages should be part of a larger “joint development project” and the city should investigate possible sources of grant funding, the report said. 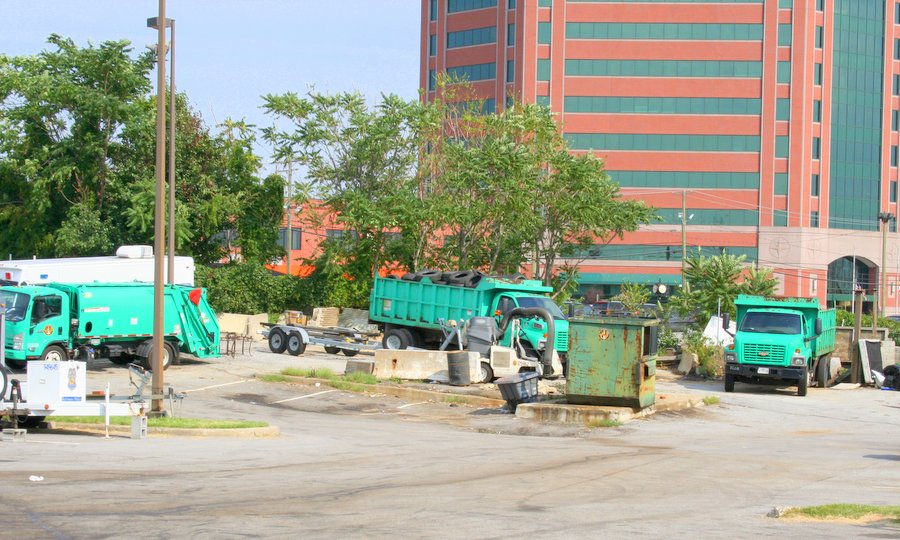 The DPW yard and parking lot (viewed from the sidewalk on Boston Street) now a storage area for city equipment. The Carefirst can be seen in the background (Photo by Danielle Sweeney)

Another site recommended for ferry parking is the DPW repair yard at Boston and Clinton streets, near the proposed billion-dollar COPT office-residential project, part of phase two of Canton Crossing’s development.

Sean Flanagan, president of the Canton Community Association, said he had not yet read DOT’s water transit report. He had in fact just learned of its existence.

“We weren’t involved with this. It came as a bit of a surprise, actually,” he said. 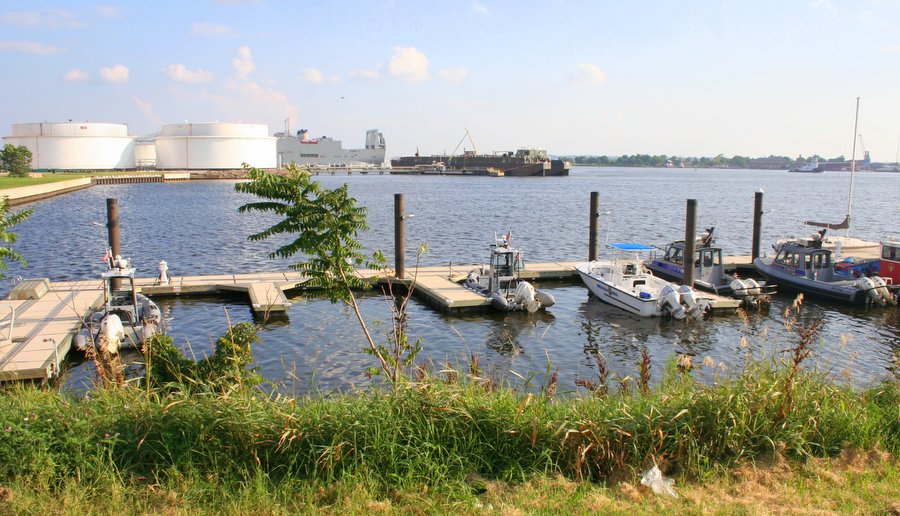 View from the Canton Waterfront Park parking lot at Boston and Clinton streets where municipal and police boats are docked. (Photo by Danielle Sweeney)

Its not the first time Flanagan was surprised by DOT plans for Canton.

He told The Brew in July he was shocked to hear that DOT (in the Southeast Transportation Vision plan) had recommended the DPW repair yard for a transit hub with a parking deck for ferry and commuter bus riders).

At the time, he said, the association had been talking with the city to transform the repair yard to a community or green space.

But, Flanagan says, with the repair yard being mentioned in multiple proposals for development, he said he has concerns, and not just about the repair yard.

“It is our very strong position that the City [should] initiate a master plan for the Canton Waterfront Park – especially given all the proposals for future use of the DPW/DOT lot at Boston and Clinton,” he said.

“They need to do it, and we need to be a part of it.”
__________________________
DOT is accepting public comment on the 71-page “Alternative Expansion Study: Water Transit Strategic Plan,” which also discusses DOT recommendations for the Water Taxi and the city dockmaster, through the end of September.