At a recent forum on the 21st-Century Schools initiative, advocates said they deserve more engagement with the massive process underway to renovate or replace dilapidated Baltimore school buildings over the next 10 years.

School communities in particular, supposedly partners, feel like the last to know what is going on, said Mary Alexander, a participant in the event held last week at the Baltimore Design School.

“You should hear what our ideas are before the design process begins,” Alexander said, addressing a crowd of more than 200 attending a break-out session. “I feel that individual parents are persona non grata. We are not involved. Instead, we are told what is going on.”

Alexander expressed some specific concerns about Northwood Elementary School, a school in Year Two of the project that will be undergoing an estimated $41 million renovation.

The Northwood Elementary grandparent told the crowd she had actively sought to be involved in the process and inquired about being on the 21st Century advisory committee, but felt her efforts got only tepid response from City Schools – and no response from the Maryland Stadium Authority – one of the partners in the school construction plan.

“When will you come talk to us? said another parent, Beatrice Bastiany, of Berea, president of the Friendly Neighborhood Association. Bastiany was concerned that plans to rebuild a school in her neighborhood also mean tearing down a recreation center. 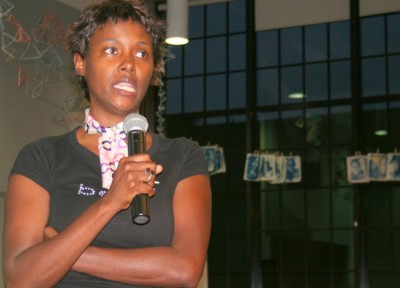 Nicole Price, director of family and community engagement for the city school system, told her school officials have been preoccupied with the beginning of the school year. She promised that meetings with Berea-area residents will take place in September, October and November.

Not at the Right Table

Price had her hands full addressing the many parents who expressed frustration with the renovation and re-building initiative approved by the state legislature in 2013. She told Alexander that the advisory committee she sought to join deals with issues at a high, system-wide level.

“It is citywide and multi-issue, it is not focused on individual schools,” Price told her.

Price said the school system is paying attention to Alexander’s and other parents’ concerns, but that there are other places where they can be expressed.

“The PCAB [Parent and Community Advisory Board] and PTA, both citywide and multi-issue, will have an opportunity to participate in the meetings going forward,” Price said.

That didn’t set well with Alexander.

She said that parents of elementary, middle and high school students, as well as students with special needs ought to be included in that high-level advisory process.

“The parents are not sitting at the right table,” she said. “The school system – some things they don’t want parents to know until the last minute.”

Price encouraged Alexander to become involved with the “core team” at Northwood Elementary.

The 21st Century School Buildings plan, a partnership between the MSA, the city school system and the Interagency Commission on School Construction, will build or renovate between 23-28 schools over the next 10 years.

The plan’s web site says a minimum of nine meetings will be held with the community and parents at each school and provides details on the status of each school (Year One) project.

“It was not slated for closure,” she said of the rec center. “‘It didn’t close per se. It is simply being torn down.”

The school buildings plan does not fund the construction of recreation centers, she observed, and yet the school system and Stadium Authority are demolishing a rec center without building a new one.

“We live in a densely populated area with many children. The rec center was a safe place for them,” said Bastiany, an education advocate who lives in East Baltimore,

The rec center, which is attached to the school on its south side, will be demolished because architects wanted to build on the whole lot, Bastiany said. 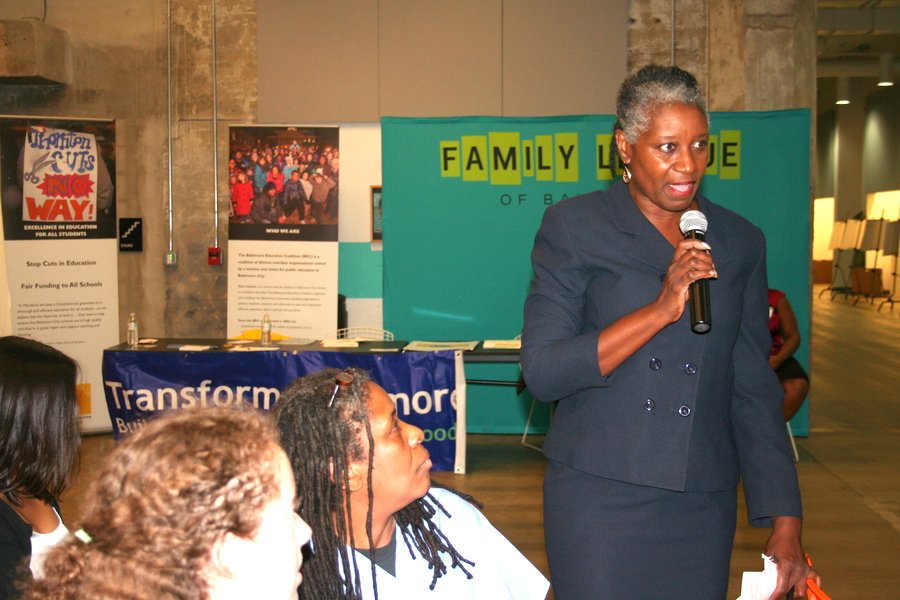 Beatrice Bastiany, president of the Friendly Neighborhood Association of Berea, discusses the neighborhood’s reaction to losing its recreation center. (Photo by Danielle Sweeney)

School officials did not reply to her questions about why the recreation center had to be torn down, but it remains a sore point with Bastiany’s group, which built a computer lab at the now-closed rec center.

Bastiany said the rec center provided several thousand square feet of space and included programming for seniors and ample space for community meetings.. (The Friendly Neighborhood Association of Berea now meets at the Herring Run branch of the Pratt Library).

Price acknowledged the neighborhood was “losing a standalone facility” with the demolition of the rec center but said, as part of the 21st Century plan, some of the space at the school could be used for community recreational programming.

“We will enter into a licensing agreement with Rec and Parks whereby they will be able to use some of the space,” she told The Brew.

The space would be available after school and on weekends and somewhat during the school day, Price said. Fort Worthington’s online school design plans indicate that 980 square feet would be set aside for flexible community space.

Bastiany said she knows what the online documents say, but fears the community will be shut out.

“We want it in writing that we will have access,” she said.

When will Demo Begin?

Bastiany was also worried about the demolition of the buildings at Fort Worthington.

“When will demo begin?” she asked. “There’s a senior building across the street, and they don’t even know anything about this.”

Construction on the school is set to begin in December, according to online documents. (Students are currently at the William C. March Middle School.) 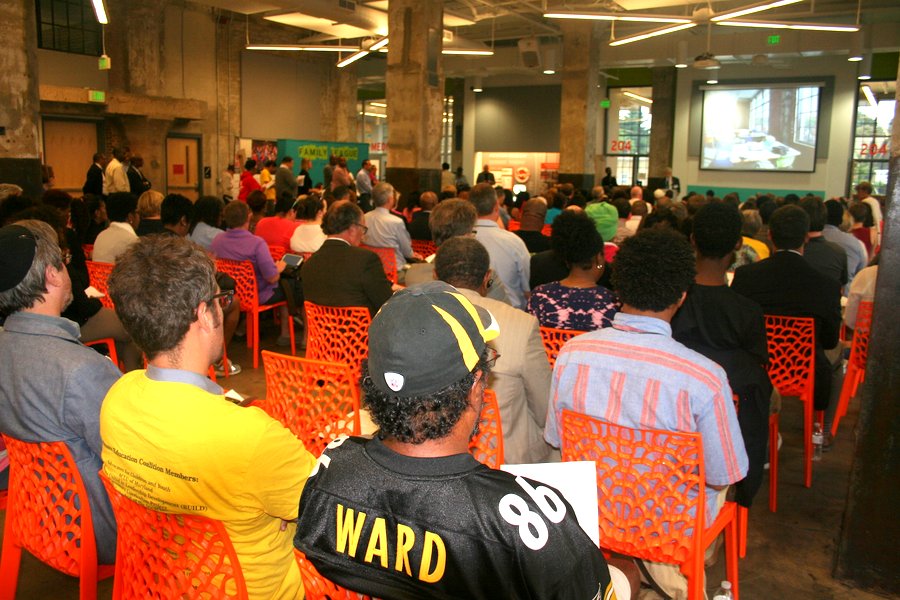 The crowd at the Baltimore Design School for a forum on the city’s school facilities overhaul. (Photo by Danielle Sweeney)

As for the children having access to another rec center in the interim, Bastiany said there are few nearby options.

Collington Square is the closest, she said, but she called the area unsafe.

“The Rita Church rec center, a ‘super center’ in Clifton Park, is very nice, but a few bus rides away,” she said. “No one is going to put a child on the bus to go to Rita Church.”

The computer lab where Bastiany taught a computer class to neighborhood children was dismantled when the rec center closed this August, she said.

“We gave the computer equipment away.”

Another concern brought up in the breakout session was how decisions are made about swing space (temporary teaching space while schools are undergoing construction) during the building process.

“What was the thinking about swing space and academics?” asked Larry Simmons, a community resource coordinator with the Child First Authority at Westside Elementary School.

After Christmas break this year, John Eager Howard students will relocate to Westside Elementary more than a mile away.

“The December merger was not part of the original plan,” Simmons said, speaking with The Brew. “We didn’t find out until June.”

Construction on John Eager Howard is slated for completion in June 2017 with occupancy in August of 2017. By that point, Westside will be vacated, and Westside/John Eager students will return to a new John Eager Howard Elementary.

Simmons noted that the staff at each school – both community schools with Child First Authority programming – are working to smooth the transition, but he was puzzled by the mid-year merger decision, a disruption even under the best circumstances.

When asked what the rationale was for the mid-year merger, Simmons said he didn’t know: “That’s really the million dollar question.”
___________________________
The 21st Century Schools website promises to post answers to questions raised at the forum by this Thursday (September 17).