A meeting last night by community opponents of a Royal Farms mega-store in Northeast Baltimore turned into a flip-flop session by two powerful politicians, who signaled that they now oppose the project.

“I’ve heard you,” said Mayor Stephanie Rawlings-Blake, making a surprise appearance at the NoRoFo Hamilton meeting as her aides passed out a memorandum from her administration opposing the facility.

The memo from Planning Director Thomas J. Stosur informed the Board of Municipal and Zoning Appeals (BMZA) that the city “recommends disapproval” of an appeal by Royal Farms because the store “would be detrimental to or endanger the public health and general welfare.”

The September 16 memo, Stosur said, “supersedes the memorandum dated April 2, 2013” where the Planning Department expressed “no objection” to a 50-parking-spot, 12-gas-pump, 24-hour store at the corner of Harford Road and Glenmore Avenue.

Councilman Robert W. Curran, whose endorsement of the store had infuriated many local residents, said the Royal Farms plan would not go forward.

“The Planning Department has given a negative opinion to the project,” Curran told the group last night. 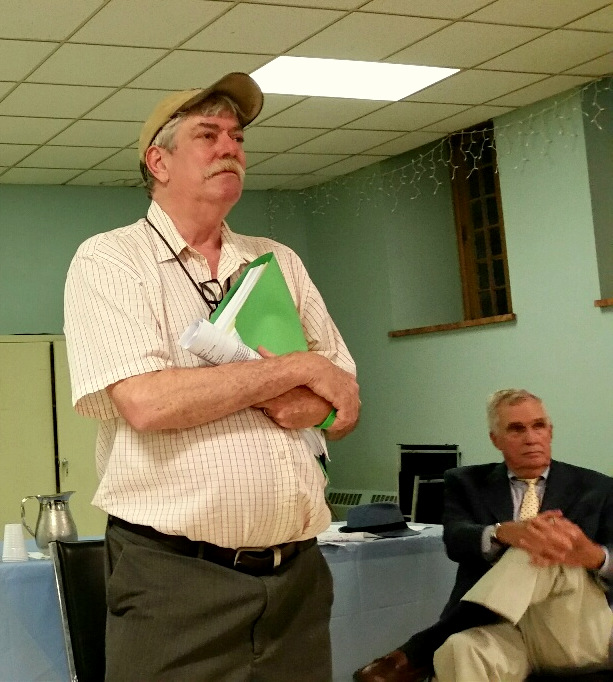 “And what that means is that even if it is approved by the BMZA, the permit process, when it goes to the Planning Department, is not going to happen. They will not be issued permits and, in that sense, the project is dead.”

Young told about 60 residents that he supported the community and planned to speak against Royal Farms at the October 20 BMZA hearing where the company has reapplied for a zoning permit for the store.

Amid cheers and hand claps by the audience, NoRoFo’s lawyer, John C. Murphy, warned that the group’s jubilation over the city’s reversal could be premature.

“What we have here is a recommendation for disapproval from the Planning Department,” he said. That’s all it is,” he said. “The attorneys on the other side have spent thousands and thousands of dollars in fighting for the approval of this case. I don’t think they’re going to lay over dead at the October 20th hearing.

“Their point is,” Murphy continued, “that all the testimony has been taken thus far, and it is just a technicality to approve [the permit] just now. So my message to you is this: Everybody has to be at the October 20th hearing. Show the board how concerned the community is. Don’t assume this is over. It’s not over until October 20th.” 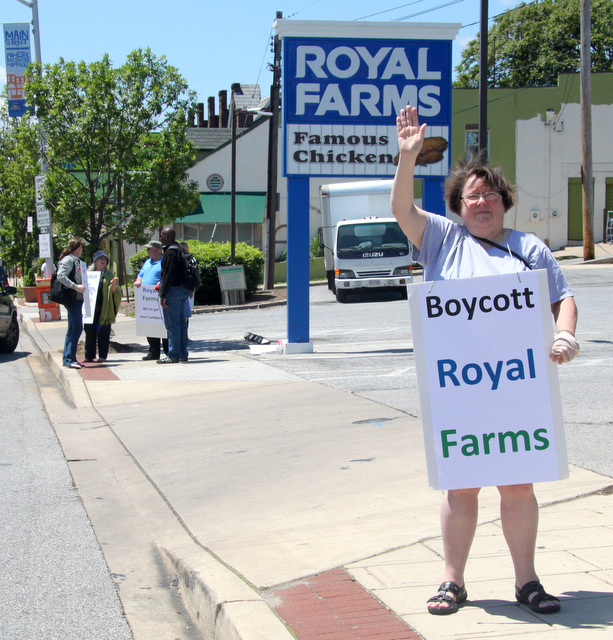 Sheila Ebelein, president of the Glenham-Belhar Community Association, protests at a nearby Royal Farms store in 2013. (Photo by Fern Shen)

Stanley S. Fine and Caroline Hecker, who represent Two Farms Inc., the owner of Royal Farms, did not respond to a request for comment today by The Brew.

Rawlings-Blake’s original support of the Royal Farms project came in 2013 when she called for a $500,000 traffic study of the Harford-Glenmore intersection.

She praised Royal Farms for agreeing to give up a portion of their land on Glenmore to accommodate a realignment of the street.

After the BMZA approved the plan in 2013, the NoRoFo group crowd-sourced a fundraising campaign and hired Murphy, who represented the group as it appealed the case before the Maryland Court of Special Appeals.

The court remanded the case back to BMZA, which, at the request of lawyers Fine and Hecker, have scheduled the October 20 hearing on whether to grant Royal Farms a conditional use in a B-3 zoning district.

Stosur also said the mega-store would conflict with the 2008 Harford Road Corridor Study that called for pedestrian-oriented shops and restaurants along the thoroughfare.

“A ‘gas-and-go’ service station, even with a convenience store component, would be contradictory to this goal,” he wrote.

The property in question has been owned for years by Local 37 of the International Union of Operating Engineers and contained a now-vacant office building.

Three weeks ago, on August 27, the property was sold to “Harford 5901 LLC” for $1.5 million, according to state land records. A month earlier, the First National Bank of Pennsylvania had loaned $1.675 million to the LLC secured by the Harford Road property.

The loan was signed by David Berg, a scrap metal dealer, and the LLC lists Jeremy Landsman as its resident agent.

Landsman was busted in a drug trafficking case in 2012 where he admitted to participating in a ring that transported $30 million worth of marijuana around the country.

The Aliceanna property has become a center of a controversy in Fells Point following a proposal by developer Richard Manekin to build a 87-unit apartment building on the site.

Manekin and Councilman James B. Kraft say the plan would be an excellent use of long-vacant industrial property, while residents say it would add to congestion and car traffic in a waterfront district already saturated with new development.

Current zoning allows for no more than 40 units on the site. Kraft has introduced legislation in the City Council that could permit up to 150 units on the property. 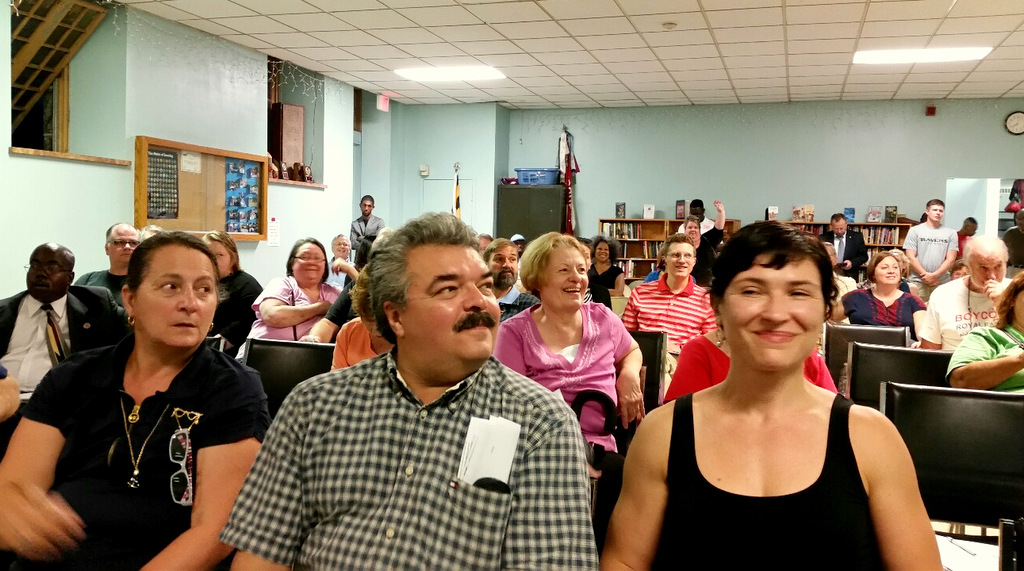 About 60 people attended last night’s meeting at the Episcopal Church of the Messiah. (Photo by Mark Reutter)

A VIDEO of the meeting made by City Explainer: