The women came out of a midday Wednesday service at Ark Church on North Avenue to a bright and colorful sight – red tomatoes the size of tennis balls, deep-green okra pods, pristine white turnips and yellow-and-orange-streaked winter squash that resembled miniature pumpkins.

“Well, what do you have today?” Barbara Williams asked the farmers from Black Dirt Farm, who had driven nearly two hours from their Eastern Shore farm to sell produce on a table outside this small East Baltimore church.

“Oh I don’t like those sweet turnips, I like the bitter ones! I’m sweet enough already!” the 69-year-old Williams said, cracking everyone up and proceeding to buy some tomatoes.

Margaret Lyle, meanwhile, went out on a limb and tried something new – instead of collards, she bought mustard greens that she planned to boil up with smoked turkey wings. (“Turkey tips,” she actually called them.)

“I really like having this right outside of church,” Lyle said, eyeing the bounty on the table. “There’s no supermarket around here.” 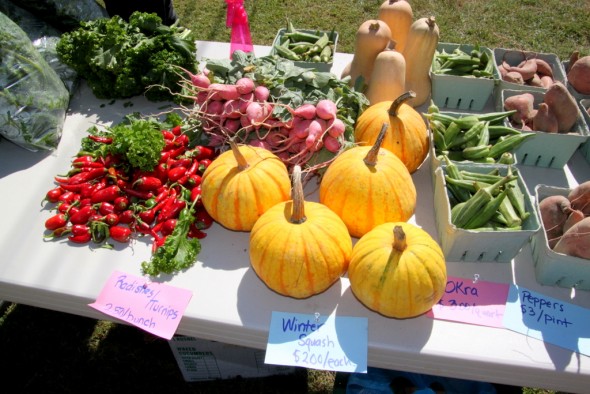 Ordinarily, to get produce like this, the 79-year-old would have had to make a special trip to the Northeast Market many blocks away.

“This is very convenient,” she said with a smile

Giving people in the city access to fresh healthy produce is what this weekly farm stand event is all about, said Aleya Fraser, a co-founder of Black Dirt Farm, located on 137 acres in Dorchester County.

(The farm is on an old plantation that is, essentially, Harriet Tubman’s ancestral land, Fraser notes with pride.)

For the past three months, Fraser, farming partner Blain Snipstal and other members of the Black Dirt Farm Collective have been coming up to this spot to sell their produce after weekday church-services let out. 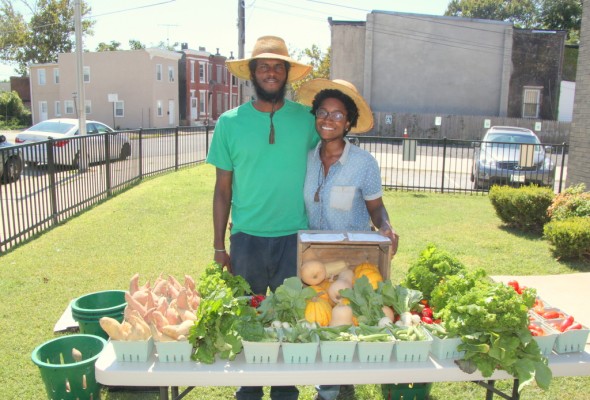 The Baltimore Food and Faith Project of the Johns Hopkins Center For a Livable Future is also a collaborator in the evolving Network project.

“We’re trying to figure out ways that the black churches in Baltimore can help give people access to good food in places that are food deserts,” Fraser said. 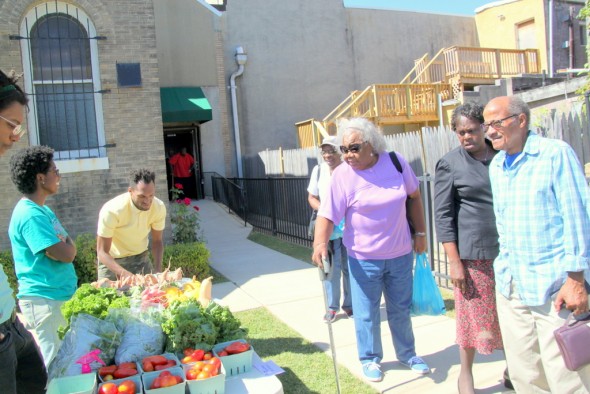 Church members check out the wares after a Wednesday service. (Photo by Fern Shen)

Other parts of the network include an urban gardening project at the 1800 block of Aisquith Street that meets on Saturday, as well as Pleasant Hope’s own church garden on East Belvedere Avenue.

Helping people eat tasty and healthy meals is the major idea behind the project, Fraser said.

They had recipe cards on the table for any who wanted them – for Okra Corn Fritters, Maple Roasted Sweet Potatoes and other savory dishes.

Linda Yates said that although she’s been a lifelong member of the church and moved out of the neighborhood to Cedonia, she still comes back for services and, now, the vegetable sale.

“It’s healthy food. I love it. I cook it for my four grandchildren. They love it,” said Yates, 65, showing off her bag of mustard greens, tomatoes, turnips and squash.

She had plans to cook up the turnips with ham hocks, an old family recipe that made her think about her roots.

“My parents are from the South,” she said, “From North Carolina, and this is something my mom cooked and she taught me.”

Friday Night on the Farm

Co-op members said they’ve been enriched by the farming experience as well. Philip Taylor, a 28-year-old landscape designer who has only lived in the city and the suburbs, said his involvement with Black Dirt has been surprisingly gratifying.

“I went on a Friday night and it was at a time they were doing work. They needed to can some tomatoes for the winter,” he said. “And it was fun! Peeling tomatoes and boiling them and making sauce was fun. If you had asked me a couple of years ago if I’d want to spend a Friday night like that I’d have said you’re crazy.” 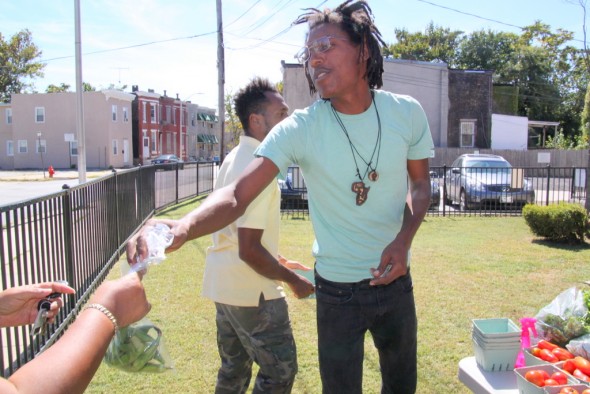 He said watching Blain and Aleya juggle day jobs and their Black Dirt work was not just fun, but inspiring.

“I realized this is something they do for people. It’s not to sustain themselves,” he said. “Their intention is really pure.”