Philadelphia has its Rocky statue. Detroit is building one to commemorate the 1987 cyberpunk film RoboCop.

And Baltimore needs a monument to honor John Waters and Divine?

That’s the idea behind a proposal for the city’s newest public monument, which is inspired by a scene from filmmaker Waters’ 1972 movie, Pink Flamingos.

Yes, that scene where Divine, a 300-pound transvestite playing “The Filthiest Person Alive,” eats fresh dog droppings (actual ones) off a Baltimore sidewalk.

Now a group of Waters and Divine fans wants to commemorate that moment in cinematic history – and add a transgressive destination to Baltimore’s tourist map – by creating a monument that marks the spot. 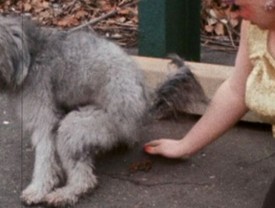 Here it is. (Photo credit: animalnewyork.com)

Proponents floated the idea of a “Pink Flamingos Monument” during a recent meeting of the Public Art Commission, which reviews proposals for gifts of art and requests to place art on city-owned property.

Some sort of shrine or alcove, they said, could honor Waters and Divine while answering a frequently-asked question: Where was that scene from Pink Flamingos filmed?

The commissioners, who have sat through their share of provocative proposals, listened intently before rendering a verdict.

“I am appalled,” said panel member Elissa Blount-Moorhead, “that it hasn’t happened before.”

“Can You Tell Us”

Blount-Moorhead was not alone in her positive reaction.

“I think it is a fantastic idea, the best memorial idea I have ever heard,” said commissioner Frank Dittenhafer.

Michal Makarovich told the art panel that he owns a shop in Hampden called “Hampden Junque” and frequently gets asked one question about Waters’ trash classic:

“They ask, ‘Can you tell us where Divine ate doggy-doo?’” he said. “Except they use another word.”

Makarovich said he tells visitors the scene wasn’t filmed in Hampden at all but in Mount Vernon – near the corner of Read and Tyson streets. 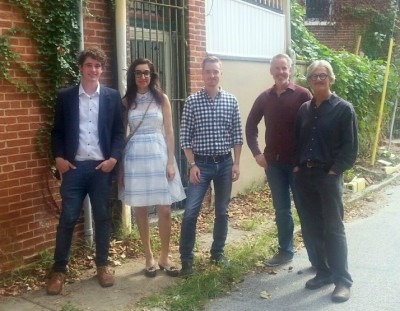 Permanently marking the spot, he argued, would be good for tourism in Baltimore, and for the 200 block of West Read in particular.

If built, it would be part of a trend in which cities are erecting monuments to fictional events and people. In Woodstock, Illinois, for instance, where the 1993 movie Groundhog Day was largely filmed, the community installed a plaque to mark the puddle that Bill Murray’s character steps in, over and over.

No one in Baltimore has yet made permanent memorials to mark scenes from David Simon’s HBO series The Wire, though Internet maps and blog posts abound.

There is, though, a plaque on the Fells Point building that served as the police station in the network television show, Homicide: Life on the Street, based on Simon’s 1991 book.

The concept of using artwork to celebrate Pink Flamingos came from Alexander Fox, who operates an events venue in Hampden called Church & Company, and Michael Pugh, a teacher at the Baltimore Design School and owner of a rowhouse that is close to the spot where the dog did his business.

Pugh’s house is across Tyson Street from a house once occupied by Pat Moran, Waters’ longtime friend, casting director, and frequent actress in his movies. Pugh speculates that one reason they chose the area for the dog scene is because it was near Moran’s house.

Exactly where the scene was shot is not known, members of the group confessed, during a recent visit to the area. They said they are sure it is just south of the intersection of Tyson and Read streets, on a narrow sidewalk. But they aren’t positive which side of the street it was.

In the film, characters are shown walking a dog along the south side of the 200 block of West Read Street. But when the dog stops, the camera zooms in so closely that all viewers see is the dog and the sidewalk and Divine lying down on the sidewalk, without any buildings for context.

(Waters once said in an interview that the dog was cast for the scene because it was supposed to be capable of doing its business on cue, but that wasn’t the case and the film crew had to follow it around for a long time before it would “go.’”)

Others in the group planning the monument include:

• Sebastian Martorana, an artist known for sculpting everyday or even mundane items in marble and whose work was featured this year at the Walters Art Museum.

• Steve Yaeger, a Baltimore filmmaker and friend of Waters, who made a film about him titled Divine Trash.

• James Stevenson, who is creating a website about the project.

• Parisa Saranj, who will help with internet fundraising.

Hess and Martorana would create the art, the others said. 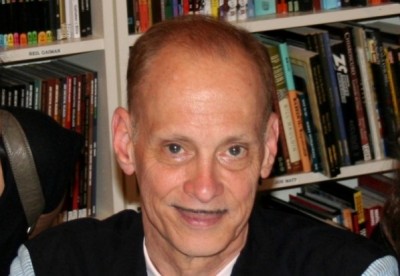 John Waters, at an event at Atomic Books. (Photo by Elizabeth Suman)

Although there is no budget yet, the monument could end up costing more than the movie did.

Reportedly produced for about $10,000, and hailed as “the watershed of bad taste,” Pink Flamingos is the story of a notorious Baltimore criminal and underground figure, played by Divine, who holds the title of “The Filthiest Person Alive.”

Divine goes up against Connie and Raymond Marble, a sleazy married couple who try to humiliate Divine and seize the “Filthiest Person Alive” title.

The movie’s final scene is the one in which Divine, having killed the Marbles, solidifies his claim to the Filthiest Person Alive title. And in one gulp, a cult favorite was born.

“Even if I discover a cure for cancer, the first line of my obituary is bound to mention that I once made a film where Divine eats dog sh*t,” Waters once said. “Which would be OK with me.”

Divine, whose real name was Harris Glenn Milstead, died in 1988 and is buried at Prospect Hill Park Cemetery in Towson. His grave site, often marked with lipstick graffiti, has become a pop culture destination.

Waters has said he has purchased a grave site in the same cemetery, along with Pat Moran and actress Mink Stole, so they can all be buried together. They call it Disgraceland.

“What People Think of Baltimore”

Waters, who is 69 and last year marked 50 years a filmmaker, is not part of the group planning the Pink Flamingos monument, but he knows about it and is not opposing it, group members said.

Makarovich said Waters has let the group know he is busy with current projects and cannot lobby for it. 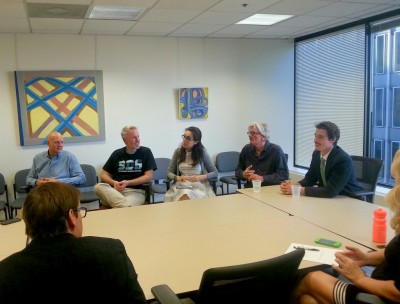 Members of the art panel encouraged the group to keep working on its proposal, and took no official action during the initial meeting.

They said the art commission may need to approve the project if it ends up being proposed for city-owned property.

If it is proposed for the side of a privately-owned building, they said, it would need approval from the Commission for Historical and Architectural Preservation CHAP) since the intersection of Read and Tyson streets falls within a historic district.

The art panel members praised the group for thinking creatively.

Blount-Moorhead said she is from New York and John Waters’ movies were instrumental in shaping her impressions of Baltimore.

“As a New Yorker who was raised on John Waters,” she said, “I think it is what people think of Baltimore.”

Whew, Not Too Literal 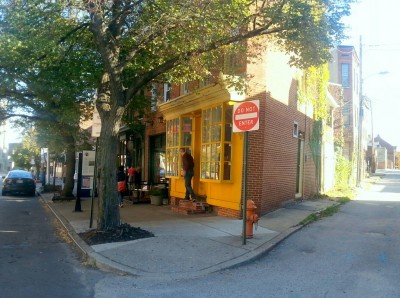 The notorious scene in Pink Flamingos was filmed somewhere near the corner of Read and Tyson streets. (Photo by Ed Gunts.)

Speaking after the meeting, group members said the monument could be on public property or it could be entirely on the side of Pugh’s house, depending on what the design turns out to be.

Makarovich said the group is not thinking of creating anything as literal as a life-sized sculpture of dog droppings on the sidewalk.

He said the group is thinking of creating something more along the lines of a “shrine” that marks the area and tells the story of what happened there and perhaps explains what it meant to the careers of John Waters and Divine.

There is even some thought of renaming a portion of Tyson Street “Pink Flamingos Way.”

The planners say they hope to have a design approved and funded in time to create the monument by next summer, possibly in time for Artscape and the annual Pride Festival.