Last Call really was Last Call on Saturday night for the Hippo, Baltimore’s well-known gay nightclub, which closed its doors permanently after 43 years in business.

As first reported in The Brew, longtime owner Chuck Bowers disclosed to employees last May that he was shutting the nightclub “sometime in the fall” and that the building at Charles and Eager streets would be converted to a CVS store.

On Sunday, the display windows on Charles Street were lighted but empty, with no new events to promote for the first time in decades.

A few would-be patrons tried the doors on the Eager Street side, perhaps unaware that Saturday was the last night.

“It’s done. Get over it,” a guy shouted from a passing car, to one man who tested the locked door and tried to peer through the mirrored glass windows on Sunday afternoon.

“Very sad,” said another man who was walking south on Charles Street with a female companion and paused to look at the empty display windows. “It’s the end of an era.”

Where Everyone is Welcome

The Hippopotamus (Hippo or Club Hippo for short), opened in July, 1972, featuring one of the largest dance floors on the east coast. It quickly became an anchor for Baltimore’s Mount Vernon “gayborhood.”

The founders were Kenny Elbert and Don Endbinder, and their slogan was, “Where Everyone is Welcome.” Bowers, now 70, bought the club in 1978 and the building in 2005. 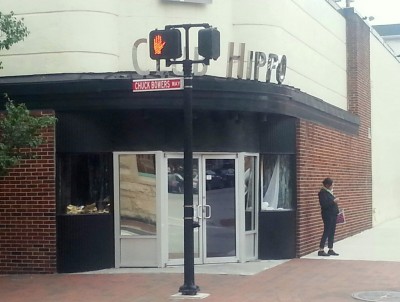 Club owner Chuck Bowers is recognized with a street sign outside The Hippo. (Photo by Ed Gunts.)

After the closing announcement in May, some patrons were hopeful that the Hippo would stay open at least until Halloween, which falls on a Saturday this year, but that wasn’t the case.

Instead, the management held a series of closing events, starting with a gala fundraiser for AIDS Action Baltimore in August.

The fundraiser was followed by a “Grand Finale Dance” on September 26 on the dance side and a final drag show on September 27. There was a last bingo night, last hip-hop night, and last women’s night. October 3 was the final night for the Eager Street Saloon and Karaoke bar.

For the record, “It’s Raining Men” by the Weather Girls was the last song played at the Grand Finale Dance.

“We would like to thank each and every one of you who has visited and supported us for 43 years,” said a message on the Hippo’s Facebook page. “Thank you from the bottom of our hearts.”

The low-rise, Art Deco-style building dates back to before World War II, when it was known as the Chanticleer, and is part of the Mount Vernon historic district.

The exterior will be preserved as part of the building’s conversion to a drug store, according to the Mount Vernon Belvedere Association and the city’s preservation commission. The Hippo CVS is expected to open by late 2016.

The Hippo’s closing leaves Grand Central at Charles and Eager streets as the city’s largest gay bar, although owner Don Davis refers to it as an “alternative bar.”

In honor of Bowers, the stretch of Charles Street just south of Eager Street has a new red and white street sign naming it “Chuck Bowers Way.”