Even a broken clock is right twice a day.

But for Baltimoreans who expect their municipal timepieces to be useful more often than that, Baltimore’s Office of Promotion + the Arts [BOPA] is on the job

The promotions office is launching a $1.8 million, eight-month effort to repair the four-faced clock atop the Bromo Seltzer Arts Tower, which has been out of commission for more than a year. BOPA manages the arts tower at Eutaw and Lombard streets.

Starting Monday, technicians from Azola Building Rehab and Balzer Family Clockworks will begin the restoration process by removing the clock hands from all four sides of the building. They will eventually remove the entire clock so it can be fixed.

This repair, the agency says, is intended to last a long time.

“The clock stopped working about 16 months ago,” said Tracy Baskerville, communications director for BOPA. “A small compressor motor had stopped working. BOPA had it serviced and the clock worked for about another four weeks. Instead of doing another temporary fix, we continued to work on fundraising for a complete restoration of the clock and the clock tower.”

The restoration is expected to take eight months to a year to complete.

Crowdfunding to the Rescue 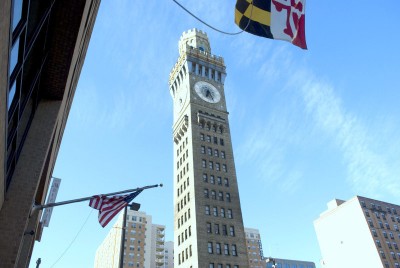 The Bromo Seltzer Arts Tower was built in 1911 and is one of the city’s best known landmarks. (Photo by Fern Shen)

Designed by Joseph Evans Sperry to look like a tower in Italy, the Bromo Seltzer Arts Tower was built in 1911 and is one of the city’s best known landmarks.

In 2007, the Baltimore Office of Promotion & the Arts completed an initial round of renovations when it converted the tower from a vacant, uninhabitable space to studio spaces for artists.

According to BOPA, a second phase of repairs is necessary now to ensure safety and structural soundness of the building. They say there are cracks and deterioration in the façade of the building, due to the weight of the 51-foot spinning Bromo bottle that originally topped the tower. They say the cracks have caused leaks and water damage, which then damaged the inner workings of the clock.

The tower will remain open to tenants and visitors while work is underway.