At a quiet neighborhood park in Fells Point, a crowd of about 70 residents listened to six candidates vying for Councilman James Kraft’s 1st District Council seat (Kraft is seeking a judgeship), answering questions about perennial local concerns like parking and development.

But at least one resident of the district, which includes Canton, Fells Point, Greektown and most of Upper Fells Point and Highlandtown, wanted to hear candidates talk about more than losing parking and Harbor Point.

Stephanie Given said crime was her top concern.

“I’m raising children here and I’m scared silly,” Given said, referring to the increase in robberies and thefts not only in Fells Point but district-wide.

“I’m more worried about muggings than parking,” she said.

All six candidates (five Democrats, one Republican and all males) acknowledged her fears. 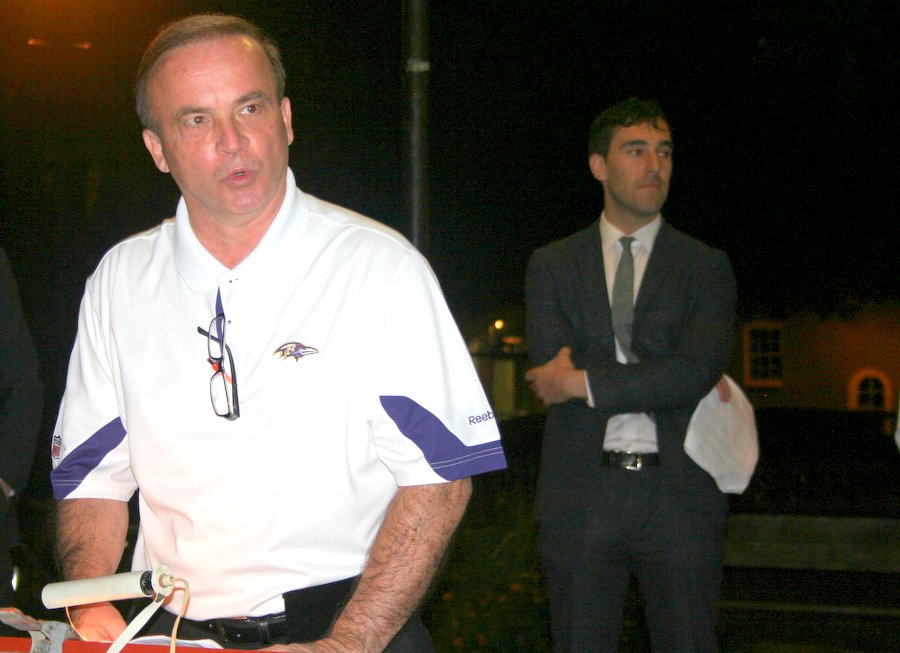 Indeed, the city’s data show that neighborhoods in the southeast have experienced 482 robberies, larcenies, and burglaries from July 1 through October 3.

Some candidates at the Thursday event defended the police department and stressed the need to expand the police force.

“That doesn’t make me feel any better,” Given replied.

Marcinko said he has gone on ride alongs with the Southeastern District police and they were doing their best with what they had. The city needs more police, pay them higher salaries and “give them incentives to live in the city,” he said.

Candidate Mark Parker, a minister who lives in Highlandtown, told Given he was more than aware of the district’s burglaries and robberies and other crime problems.

Addressing Given, he said one solution he was working on was giving community groups discounts on security cameras.

“It would help us keep an eye on each other and help the police with their investigations,” he said.

Matt McDaniel, a Canton resident and the lone announced Republican, said safety was important to all of the candidates.

Like Marcinko, he conceded that the police department had staffing problems. “They are down about 50 officers, I believe,” he said.

The event organizers had asked the candidates to address three broad topics: traffic congestion and parking, the zoning re-write, and traffic mitigation fees that developers pay, and then to take questions from the audience. 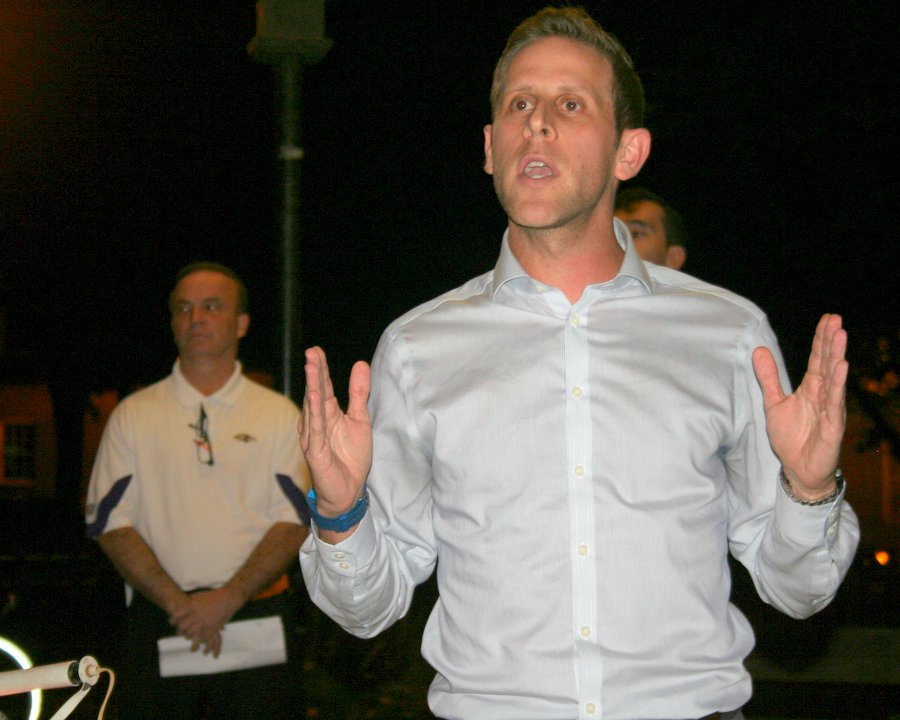 Candidate Scott Goldman, a lawyer and Canton resident who has been vocal on transit issues, told the crowd he was amenable to changing the parking mix in Fells Point’s Area 16 residential zone so residents would have more spaces.

But business and residents would both be partners in the decision-making process, he stressed.

Parker noted that 1st District resources and transit were being strained by development, but acknowledged that developers, community and city leaders were also part of a traffic mitigation work group that was evaluating ways to better manage commuter traffic from Harbor Point and Canton.

Harbor Point, which will house the new corporate headquarters of Exelon, is slated to open in the fall of 2016. The site will include 910 apartments and a retail and restaurant complex.

Acknowledging the neighborhood’s apprehensions, Parker said, “Whether you trust that work group to come up with reasonable proposals or not. . . at least the work is on the table.”

Parker discussed recommendations from yet another report – DOT’s recent southeast transit proposal – that called for commuter buses ferrying riders from I-95 to local destinations.

“It’s not an ideal situation,” he said, “but one bus with 50 people on it is better than 50 people in separate cars.”

Candidate Zeke Berzoff-Cohen said he understood the mistrust 1st District residents had for city government and the development process and impacts on historic neighborhoods, but said he wanted to be emphatic about his position on development and density. 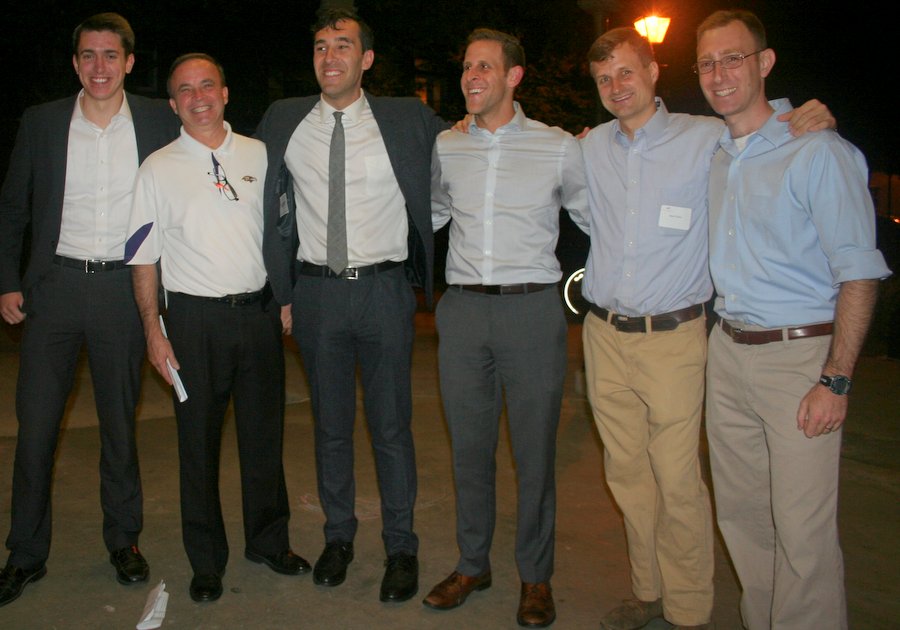 Berzoff-Cohen, who lives in Canton, said it would take a combination of solutions to address Fells Point’s and Canton’s current and looming traffic problems, including more bike lanes and traffic calming measures.

Among the the most important he said, was having “real conversations with Harbor East and Harbor Point developers and getting them to actually commit to bringing their employees to work in shuttles and vans.”

McDaniel, a lawyer who lives in Canton, made a point of stressing his independence, as the lone Republican, from the entrenched Democratic party leadership.

“There is no Republican machine in Baltimore City,” he joked. “I looked. There’s three or four people. I wouldn’t be beholden to anyone.”

Because of that, he told the audience, he could act without “fear of reprisal.”

McDaniel called the 1st District “an economic engine in the city,” noting the city’s limited tax base and need for state funding and support for transit and other projects.

As a Republican, he said, he was in a better position to act as an advocate for the 1st District and “get someone in Annapolis to be on its side.”

Marcinko said city DOT director William Johnson had acknowledged at meetings that the way the agency currently calculates traffic mitigation fees “is not working,” but the agency has yet to propose significant changes. “He says, ‘We’re working on it,’” Marcinko commented. 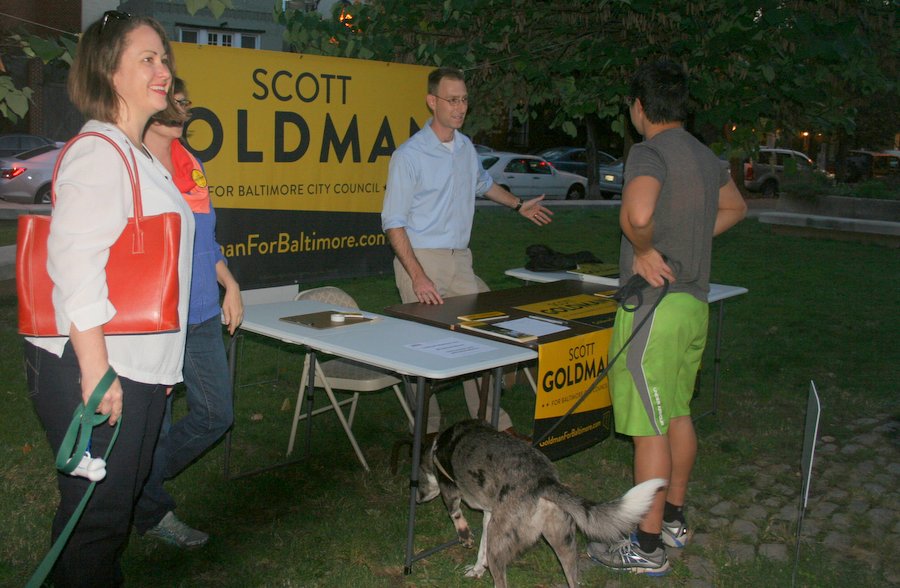 Candidate Mark Edelson, a lawyer and resident of Canton, characterized the city’s zoning as “patchwork of failure” and said the traffic mitigation fees developers pay are “woefully inadequate.”

Specifically, he criticized the new Aloft Hotel under construction by Kevin Plank’s development company on the site of the former Recreation Pier, claiming that the 130-room hotel would not be adding any parking spaces to the neighborhood.

Goldman said if elected he would work to change the way traffic impact fees are assessed.

Traffic impact fees on new developments should not be “one-time deals,” he said, referring to the current means of assessment. And if the fees “underserve the traffic impact,” he added, additional fees should be assessed.

By the end of the night, topics meandered back and forth from local to citywide issues – particularly  for Cohen, who talked about the failure of Citistat and former Mayor Martin O’Malley’s zero tolerance policies. 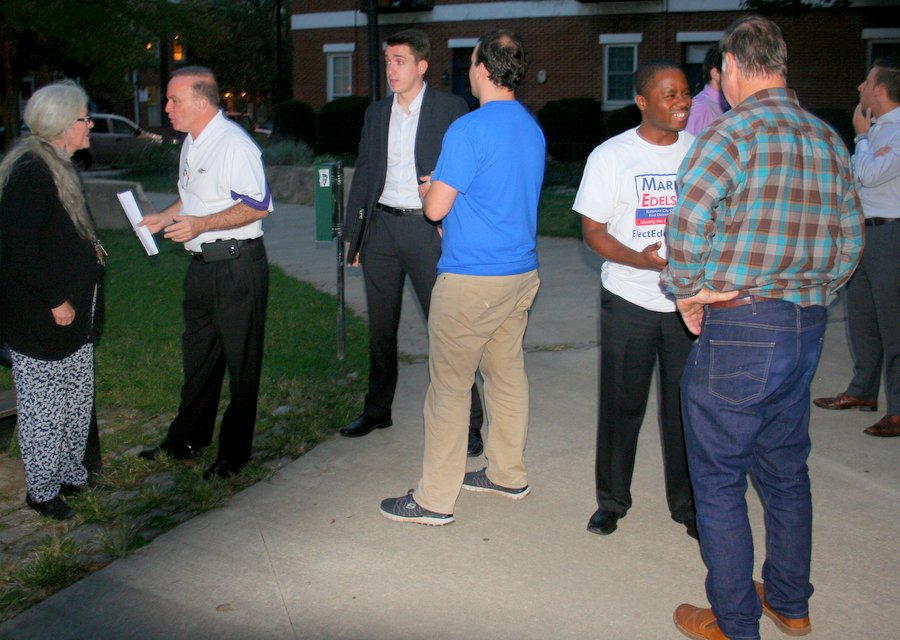 Marcinko took a detour from development and decided to briefly put 1st District small businesses in the spotlight.

“My dad owned a barber shop here for 50 years,” he told the crowd, acknowledging that running a small business  was more of a challenge these days.

One reason, he said, was taxes and fees.

“The minor privilege fees are killing small businesses,” he said, referring to fees the city collects for encroachments on the public right-of-way, such as business signs, awnings and outdoor seating.

“We need to change that,”he said.

But eventually, the evening’s  focus circled back to the inevitable: traffic in Fells Point.

Martz, who officiated the Q&A, wanted to gauge the candidates’ stances on Fells Point main thoroughfares being converted to one-way streets, a controversial solution recommended in DOT reports, but not officially proposed.

Particularly, he was referring to converting parts of Aliceanna and Fleet (and possibly Eastern Avenue) to one-way to improve traffic flow. Many residents fear the idea could lead to speeding and would take away from the historic charm of the community.

“It is still on the table. What do you all think of that?” Martz posed to the candidates.

“One-way or not-one-way?” he pressed. “Raise your hands!”

None of the candidates made a firm commitment one way or another.

Parker replied that such a drastic change would only come as a last resort to fixing local congestion. “That’s got to be at the very bottom of their [the city’s] list,” he said.