One of the oldest buildings along Baltimore’s Howard Street corridor is one step closer to meeting the wrecking ball, after Baltimore’s preservation commission approved the owner’s request to demolish it.

The Franklin-Delphey Hotel, a three-building complex at 300 West Franklin Street and 502-504 North Howard Street, will be torn down to make way for new construction, under a plan by the Baltimore Development Corp., which works to revitalize the area.

Tuesday’s action by the Commission for Historical and Architectural Preservation, known as “CHAP,” was not the building’s last chance for a reprieve.

The demolition request also must be approved by the Maryland Historical Trust before the building, a city landmark, can be razed. BDC officials say no specific project has been identified to replace the hotel and they will issue a request for proposals from interested developers when the cleared site is available.

The hotel dates from the 1850s and is owned by the city of Baltimore, which acquired it in 1989. It has had various names over the years, including Delphey House, the Academy Hotel and the New Academy Hotel.

It also was cited for being a hotel for more than a century.

The property, designated a city landmark in 2011, has been vacant for many years. It is surrounded by two other city landmarks, the former Congress Hotel, which has been converted to apartments, and the Mayfair Theater, which is vacant and in poor condition.

In a presentation to CHAP, preservation planner Lauren Schiszik said the three Franklin-Delphey buildings have deteriorated over the years and lost many of the architectural features that prompted the commission to give them landmark designation in the first place. 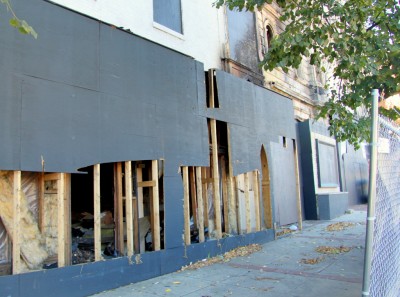 The side of the building facing Howard Street was open to the weather and sidewalk foot-traffic for weeks last November. (Photo by Fern Shen)

She noted that the buildings have lost cornices, bricks and other exterior elements that have fallen off over time, that the roof has collapsed in places, and that a 2014 fire caused extensive damage.

Schiszik said the CHAP staff recommends that the commission find that the buildings “no longer have integrity and therefore no longer contribute to the landmark designation.”

“It’s becoming a public safety issue,” said Kimberly Clark, executive vice president of the BDC, after the vote was taken. “When you have cornices falling off the building, it becomes serious.”

In November, a Brew reporter inspecting the building found that it had gaping holes at sidewalk level and an unlocked front door. There was trash visible inside and char marks on the exterior of the structure, signs of the September 24 fire that also damaged the ornate-but-also-deteriorating historic Mayfair Theatre building next door.

No one from Baltimore’s preservation community spoke in favor of preserving the buildings.

‘Try to do better next time!’

Eli Pousson, Director of Preservation/Outreach for Baltimore Heritage, a preservation advocacy group, said his organization does not support demolition but “regretfully acknowledges” the situation and sees no other option. 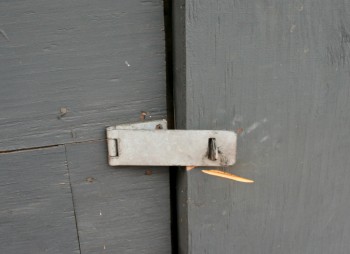 Front door of the Franklin-Delphey Hotel building, unlocked when The Brew visited last year, had a padlock hours after we inquired about it with the city. (Photo by Danielle Sweeney)

He said what happened to the Franklin-Delphey hotel over the years is a classic case of “demolition by neglect” and he is hopeful that city officials will do a better job of protecting city owned buildings in the future.

He noted that the city owns other buildings that are deteriorating, including the Cylburn House, the former H. L. Mencken House and the Oldtown Friends Meeting House.

“I think it is important to acknowledge that this is a case where demolition by neglect has been allowed to happen,” Pousson said. 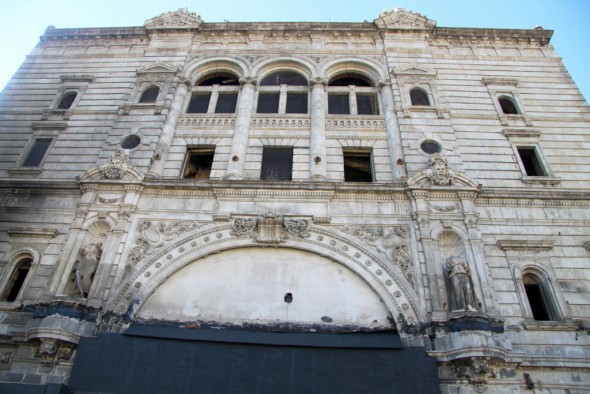 The Mayfair Theatre, next-door to the Franklin-Delphey Hotel, as it looked after the September 2014 fire. (Photo by Fern Shen)