Motivate International (formerly Alta Bicycle Shares) has offered to run the program for $587,500.

The price was far below the prices of two competitors, Bewegen Technologies of Canada ($2.1 million) and Zagster of Cambridge, Mass., ($2.3 million) in bids opened yesterday in City Hall.

Bids submitted from three other companies were not opened and were referred to the Law Department as “non-responsive.”

Yesterday’s bid greatly favors Motivate, but the city’s scoring system also examines technical matters. The highest score, yielding the winning bidder, consists of up to 30 points for cost considerations and up to 70 points for services provided by the vendor.

If all goes right – and, so far, it hasn’t – the city could have a small system in place by fall 2016. The timing would allow Mayor Stephanie Rawlings-Blake to take credit for the start-up before she leaves office late next year.

BREW’S PREVIOUS COVERAGE OF THE TRAVAILS OF BIKESHARE:

Baltimore will get the system underway with $2.8 million of federal and state funds for bike trails and related programs.

The vendor will be part of a “public-private partnership” with the city Department of Transportation (DOT) in which the city will underwrite many of the initial costs for two years, at which time the program “is expected to be financially sustainable” through memberships, user fees and private sponsorships.

In concept, bikeshare has a lot in common with Zipcars. You pick up a bike at an automated “parking station” and then drop it off at any of the other stations in the network. The bikes can be accessed through membership fees or a day pass.

The program is geared toward the short-term use of bikes as urban transportation, not weekend recreation. To encourage brief hops from place to place rather than leisurely pedals up a bike trail, the first 30 minutes is typically free to members. After one hour of use, fees tend to rise sharply.

The administration has been trying to launch such a program since 2010.

Back then, DOT had selected an operator, but the program was put on hold during the 2011 election because the mayor feared a backlash, with the program perceived as benefiting tourists at a time when she was proposing to close recreation centers and disband fire companies.

Since then, the program was revived two times, but failed to move forward after the first vendor failed to meet the contract deadline and a second company, which that was supposed to supply kiosks and “smartbike” software, went bankrupt.

The latest attempt, outlined in a recent RFP (Request for Proposals), seeks a rollout of the system 6 to 9 months after the Board of Estimates selects the vendor.

One change from the previous plans is that the geographic scope of the system has been expanded from its earlier focus on the waterfront, downtown, Mt. Vernon, Bolton Hill, Penn Station and Charles Village. 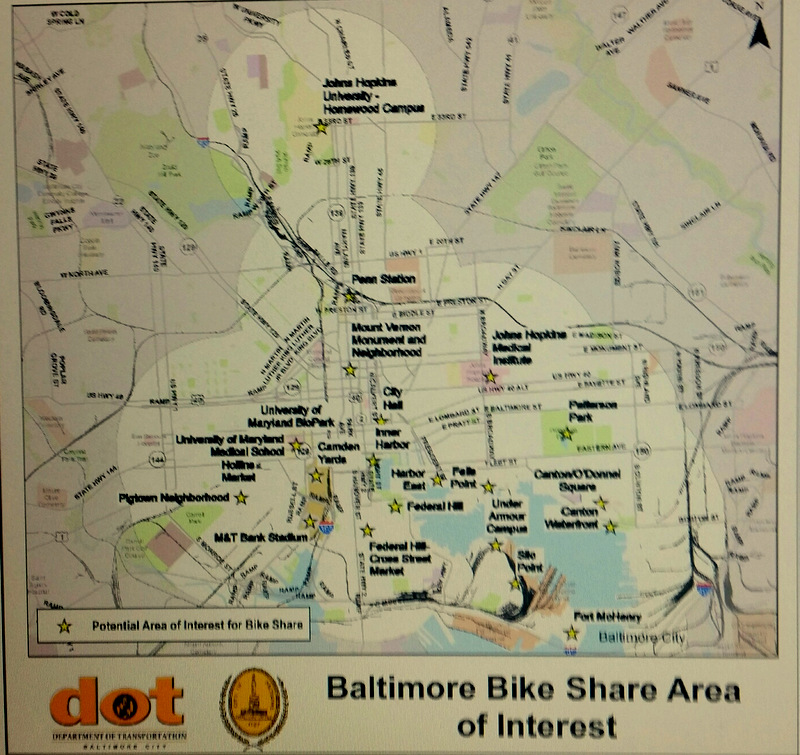 The boundaries of the network has been expanded beyond its previous waterfront-downtown-midtown focus. Here is the latest map. (Source: “The Design, Installation, Operation and Maintenance of a Bike Share System for Baltimore”)

The “area of interest” would now include the Johns Hospital Hospital and Patterson Park in the east; Port Covington and the Horseshoe Casino in the south; Pigtown, Carroll Park and Harlem Park in the west; and Hampden and Waverly in the north.

The system is designed to “pay special emphasis on social and geographic equity,” according to the RFP. “The bike-share service area represents a diverse cross section of central Baltimore in terms of age, race, income, and education. Nearly 60% of the service area’s residents are between 15 and 45.”

Even so, about two-thirds of the city would be excluded from the initial program.

Over time, the private vendor is expected to develop a market analysis of “the potential for expanding the system to different areas of the City,” the RFP states.

Brooklyn-based Motivate has bikeshare partnerships in a dozen cities. It is currently expanding the popular Capital Bikeshares, with 350 parking stations in D.C., Arlington, Alexandria and Montgomery County, to 400 stations.

The two biggest systems, both operated by Motivate, also are enlarging.

Citi Bike in New York City plans to double its size from 6,000 to 12,000 bikes over the next two years. Bay Area Bike Share, serving San Francisco, Oakland and nearby communities, is expanding 10-fold, with its fleet of bikes increasing from 700 to 7,000.

Under city rules, the bidders cannot publicly discuss their proposals until after the Board of Estimates awards the contract, which may come as early as December.