Although both candidates come out of West Baltimore neighborhoods close to the epicenter of April’s unrest, they offered a study in contrasts for how they would run their campaigns – and the city.

The boarded-up buildings at the Madison Park North apartment complex, just a few blocks from Mosby’s home, helped establish a theme for his campaign: That he is intimately familiar with the city’s problems because he lives with them on a daily basis and can therefore help find solutions for them.

Mosby said in his speech that he and his wife could have selected anywhere in the city to live but chose Reservoir Hill, even though some friends advised them not to. He said at one point in his remarks, “I’m disgusted driving through my own district” and repeatedly said that city residents must “demand better.”

“To those of you who have felt invisible,” he said, “I see you. I feel you. I will work every day for you.”

On Saturday, meanwhile, former Mayor Sheila Dixon showed off the location of her campaign headquarters, the recently refurbished Chesapeake Building in the Station North Arts and Entertainment District. 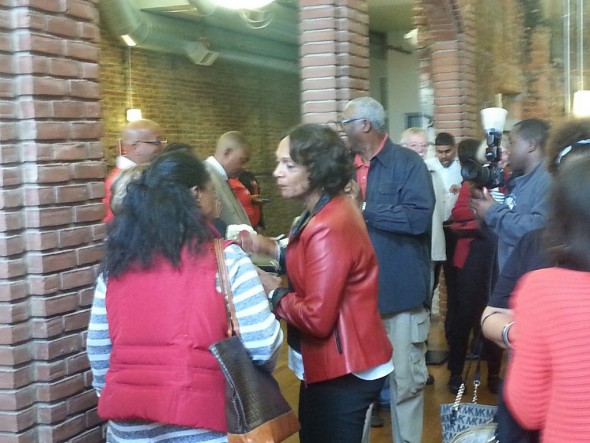 On a lively block of Charles Street that contains a cinema complex, restaurants and bars – an area far from the tourist waterfront that nevertheless attracts locals as well as out-of-towners – Dixon’s headquarters location was also symbolic.

It was visual support for her argument that she is a veteran politician who has helped the city grow in the past and can do so again by getting local government working smoothly after the riots.

“We’re at a crucial stage in the city, and it needs someone who has experience, who can hit the ground running, get within the city government, get our agencies back up and functioning, because they are dysfunctional right now,” Dixon told a reporter.

The two campaign events fall almost at a minor milestone for the city. October 27 is the six-month anniversary of the riots that occurred following the funeral of the 25-year-old Gray. (Gray died after his arrest and transport in a police van to the Western police district. Six city police officers are awaiting trial in connection with the case.)

Beyond the symbolism conveyed by the venues the candidates chose this weekend, their events demonstrated other differences between them.

Mosby, 36, presented himself as a family man, introduced by his sister Knicole and appearing on stage with his wife and two daughters. He talked about growing up with six women in his household.

The 61-year-old Dixon, meanwhile, seemed focused on stressing her image as a career public servant who served as the 48th mayor of Baltimore and now leads a team focused on putting her back in office.

Compared to Mosby, her remarks stressed more the professional than the personal. Even Dixon’s crowd reflected that emphasis on past government service – quite a few attendees were either current or retired city employees, people who knew her from when she was a City Council member as well as mayor.

Invoking her past is, of course, problematic for Dixon.

Baltimore’s first female mayor, Dixon resigned in 2010 after a jury found her guilty of one count of fraudulent misappropriation, a misdemeanor. The charge involved spending for her personal use gift cards intended for the poor. Embarrassing headlines about inappropriate activities involving developers and city contracts dogged her tenure in office.

The mere presence of the person all the candidates are striving to replace – Mayor Stephanie Rawlings-Blake – serves as a reminder of Dixon’s misdeeds. Dixon was succeeded by then-City Council President Rawlings-Blake, who decided last month not to run for mayor again, setting the stage for the 2016 election.

In his remarks Sunday, Mosby strove to come across as youthful, energetic, full of ideas and eager to roll up his sleeves.

He laid out a broad vision for improving the city, saying he wants to have body cameras on all city police officers on patrol on his first day in the mayor’s office, do more to address the problem of vacant buildings (such as the ones near where he was standing) and get better funding for public schools in the city.

“My story is a Baltimore story,” he said. “I’ve seen the best and I’ve seen the worst . . . You can count on me to fight for better schools, safer streets, more jobs, a transparent government, and better police-community relations.” 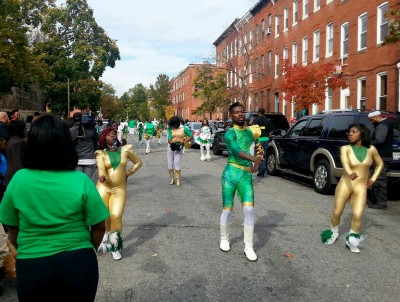 She presented herself as a politician who already knows the inner workings of local  government and the players.

For example, when asked for her reaction to a recent public housing scandal, she indicated she would launch an investigation of the housing authority and replace its head, Paul Graziano. She said she was watching other city departments very closely.

As for atmospherics, Mosby’s announcement was carefully orchestrated and filled with pomp and pageantry.

His event drew an estimated crowd of 300 to 400. It featured The New Baltimore Twilighters marching band, which performed energetically in skintight outfits that were just short of NSFW.

Mosby headed to the speaker’s podium to the sound of “Glory,” the Oscar winning song from the motion picture Selma. He read from a prepared speech, popping with passionate and fiery phrasing, lingering afterwards to greet well wishers.

Mosby may have been positioning himself as a man of the people but his audience, compared to Dixon’s, had a higher percentage of white people and of elected officials. City Council President Bernard C. “Jack” Young and veteran Councilman Robert Curran were both prominent attendees.

The campaign had leafletted the neighborhood before the event, and many in the crowd said they came out of curiosity, not full support. Rick Abbruzzese, former top aide and strategist to Martin O’Malley, was never far from Mosby’s side. 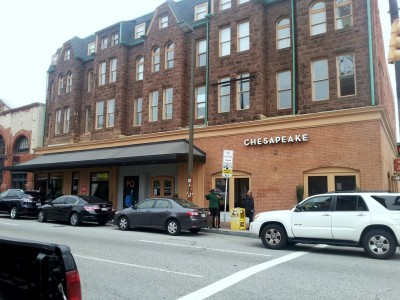 Dixon’s headquarters is in the Chesapeake Building at Station North. (Photo by Ed Gunts)

Dixon, who announced her campaign in July, organized a more casual event. She drew a crowd of about 150 and talked to just about everyone. She fed them. She didn’t have handlers nearby.

Aside from a mini-news conference for reporters, there was less speechifying. She mostly just roamed around her headquarters, approaching people before they could come up to her. She was upbeat and personable, laid-back but in control.

There was at least one similarity to the two campaigns (besides the fact that both had red and white signs): both had supporters who said they are committed to working hard for their candidates and who came from all around the city, not just the west side.

Michael Harrison, a 64-year-old truck driver from Northeast Baltimore, said he backs Mosby because he was visible from the start of the April riots, as opposed to some public officials who weren’t visible until long after the rioting was underway.

“He didn’t get in at the middle, when it was safe,” Harrison said. “He was there in the beginning, when it was unsafe. That’s a different attitude, when your life is at stake.”

“I love him because of his heart,” said Pastor Damon Dorsey of Walk by Faith Ministries. “You can’t talk to him without feeling something.”

“Nick Mosby has always been there for my community,” added Wallace Craig, president of the Lakeview Terrace apartments. “Time and time again, when we have needed him, Nick Mosby always shows up. “

Over at the Dixon headquarters, former mayoral candidate and current city schools administrator Andrey Bundley was happy to talk about why he supports the former mayor.

“I think she’s going to provide leadership for the city,” Bundley said. “She’s already doing it.”

“She brings people together,” said Richard Shipley, a purchasing manager who is the head of his condominium association in Mount Vernon. “She doesn’t divide. She brings them together.”

“She cares about the city,” offered Umar Abul-Hamid, a city employee who lives in Northeast Baltimore. “I was heartbroken when she had to leave office, so I’m glad she has the wherewithal to come back. A lot of people wouldn’t have the heart to do that.”