It’s getting cold, and Camay Owens is doing what she has to do to stay warm in her Gilmor Homes apartment since the heat stopped working more than a year ago.

“I sleep with my oven on and all four burners going,” Owens said yesterday outside the headquarters of the Housing Authority of Baltimore City and Baltimore Housing.

Owens, who has lived in the city-owned West Baltimore public housing complex for eight years, said months of requests for repairs – or even just a space heater – have brought no results.

The 28-year-old said she has some hope the problems may be corrected now, following a meeting she and other tenants and their advocates had just had with housing chief Paul T. Graziano and others officials about conditions in city public housing.

But she and other participants in the meeting said they were angry that it took media coverage and a demonstration – mounted by more than a dozen chanting, sign-waving tenants yesterday – to get the Housing Authority to listen to their long-standing reports of deplorable conditions.

“It’s inhumane that these people had to rise up and do things in a highly spirited way just to get someone to pay attention,” said John P. Comer, lead organizer with Communities United, which has been advocating for public housing tenants. “It shouldn’t be that way.”

Comer said he and the residents were hoping housing officials would agree to a timetable to address a long list of demands including extermination of rats, mice, roaches and bedbugs, repair of defective heating and cooling systems, mold abatement, repair of open sockets, locks on first-floor windows and the repair of plumbing leaks, starting “most urgently with those near electric lines and fixtures.”

The two-page document described “the enormous backlog of work orders from residents” and demanded “effective and accountable management,” of the maintenance staff, as well as independent oversight of Housing Authority maintenance work.

Instead of a timetable to do the work, what the group came away with at the end of the meeting was a promise that Graziano would accompany the tenants on a series of three-hour tours of Housing Authority properties to see the problems first-hand.

(These “site visits,” Comer said, would begin with Gilmor Homes this week on a day as yet to be determined.) 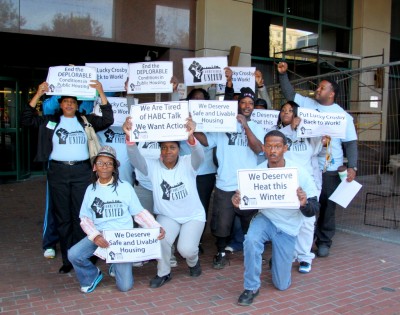 Tenants said the Housing Authority has ignored their complaints about the conditions of their homes. (Photo by Fern Shen)

The meeting with officials comes on the heels of a lawsuit filed last month by seven women who live at Gilmor Homes and said maintenance workers there have routinely demanded sexual favors in return for performing needed repairs.

Affidavits filed in connection with the case describe horrific instances of physical assault and coercive behavior by the workers, who have keys to apartments and the power to have residents evicted.

One woman, who uses a cane to walk, said she couldn’t get the maintenance crew to install handholds in her bathroom. One worker told her he wouldn’t make repairs unless she gave him “some booty.”

The suit alleges that Graziano and other Housing Authority officials “ignored numerous complaints” and allowed the abusers to remain in their jobs. Housing officials have said they are disturbed by the reports and are investigating them.

Meanwhile Baltimore State’s Attorney Marilyn J. Mosby is conducting an investigation to see if criminal charges should be filed.

The lawsuit is only one of the damaging headlines putting heat on the Housing Authority and Graziano, who is facing mounting calls for his resignation by activist groups, including Baltimore Bloc and City Bloc.

Residents of Lakeview Towers near Druid Hill Park spent several days without water or heat earlier this month. After complaints and sidewalk demonstrations by tenants, Housing Authority officials had to move elderly tenants of the complex to motel housing for two nights.

According to Housing Authority maintenance worker Lucky Crosby Sr., who joined the protest yesterday, Graziano and other top department officials were well aware of the sex abuse by employees as well as the severe backlog of maintenance complaints.

Crosby, who submitted an affidavit as part of the lawsuit, said he believes Deputy Executive Director Anthony Scott and Chief of Staff Kim Washington, should be fired along with Graziano.

“I told them. They all knew,” Crosby said.

Crosby, who was fired last week,  said he was dismissed in retaliation for being a whistle-blower. The cause cited for his firing, he said, was a minor altercation with a co-worker.

Housing Authority officials have refused to comment on Crosby and his allegations because, they say, it is a personnel issue. 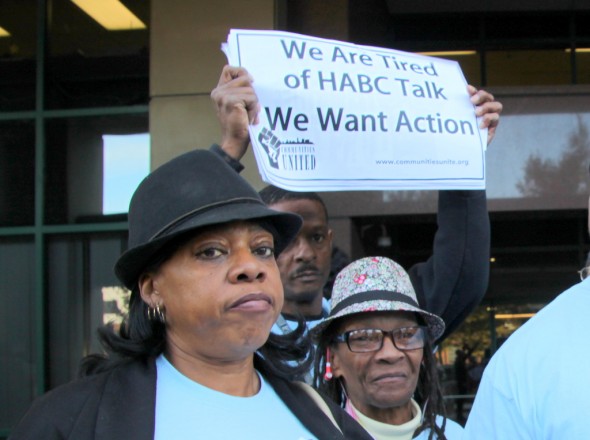 Protesters outside Baltimore Housing, including Rochelle Barksdale, at left. (Photo by Fern Shen)

Along with the chants of “No more talk, time for action!” there were calls for Graziano’s ouster from some of the demonstrators. “He’s got to go!” they shouted.

Asked whether she shared that sentiment, Rochelle Barksdale, a McCulloh Homes resident who had been in the meeting, paused a long time.

She had just finished explaining her own efforts to get broken air conditioning fixed at her apartment, where the stifling summer heat aggravates her asthmatic son’s breathing problems.

“I guess I’ll have to say, ‘Let’s wait and see what [Graziano] does,’” Barksdale said, with a stony look.

“I would like to see how he would feel if he had to move into one these places and live the way we do.”

Here’s a comment from Department of Housing spokesperson Tania Baker that came in after publication: