The Board of Estimates is set tomorrow to approve $8.94 million to buy about 210,000 garbage cans that will be distributed next year to every city household as part of an effort to keep streets cleaner and reduce the rat population.

North Carolina-based Schaefer Systems International has been selected as the supplier of the rollout containers that will be equipped with radio frequency (RFID) tags for tracking purposes, painted green, emblazoned with the city seal and lettered with text that will read, “Property of the City of Baltimore.”

The purchase of so-called “smart” garbage cans has been one of the top priorities of Mayor Stephanie Rawlings-Blake to replace the myriad of cans, containers and plastic bags currently used by residents to dispose of their garbage.

A pilot program of 11,000 municipally-owned carts distributed in the Mondawmin area and Belair-Edison last year has been credited by the mayor with reducing citizen calls for rat exterminations by 75%.

(That number was amended to 26% by the Department of Public Works after The Brew questioned inconsistencies between the percentage cited and the recorded number of citizen calls in the two neighborhoods.) 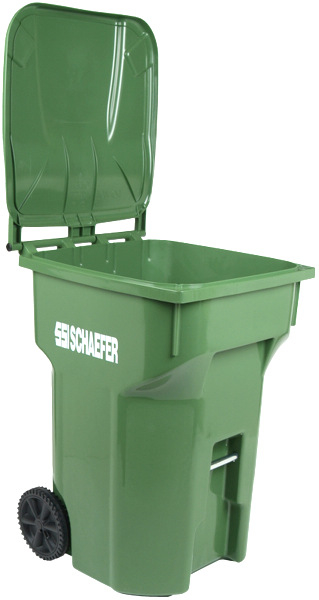 A prototype trash container made by the supplier. (Schaefer Systems International)

Each container will have an attached tight-fitting lid, two wheels, RFID tags and handles for lifting and dumping the contents automatically into city garbage trucks.

(However, to make the automatic lift system work, the truck fleet will have to be equipped with automated arm lifters, and that would cost at least $400,000, according to Public Works director Rudolph Chow.)

Each Schaefer Systems container will cost the city about $40 and include a three-year service contract with the company to maintain the cart inventory and supply scanners and scanner software to keep track of the containers.

Few details have been released about the mechanics of the program, including a definitive answer about whether households will have to pay a fee for the new carts.

The enterprise fund would establish a “pay-as-you-go” pricing system for households based on the amount of trash and recycling they use – similar to how the city charges residents for water and sewage usage.

In addition to the fee question, it is not clear at this point when the carts will be distributed around the city or how households can choose between different cart sizes.

The RFP (Request for Proposals) for the program indicates that carts will range in three sizes: 32 gallons, 64 gallons and 96 gallons. (UPDATE: The city subsequently changed the sizes to 35  gallons and 65 gallons.)

Households are expected to dispose of their weekly garbage in the city-owned carts.

Rawlings-Blake has said that the cost of buying the 200,000-plus carts will be partially offset by savings in the city’s rat eradication program and in fewer worker compensation claims by DPW workers.

In terms of sanitation, the new containers are advertised as having a big advantage over many current cans – they will have an attached sealed lid aimed at preventing high winds or rats from knocking over the can and dumping the contents onto the ground. 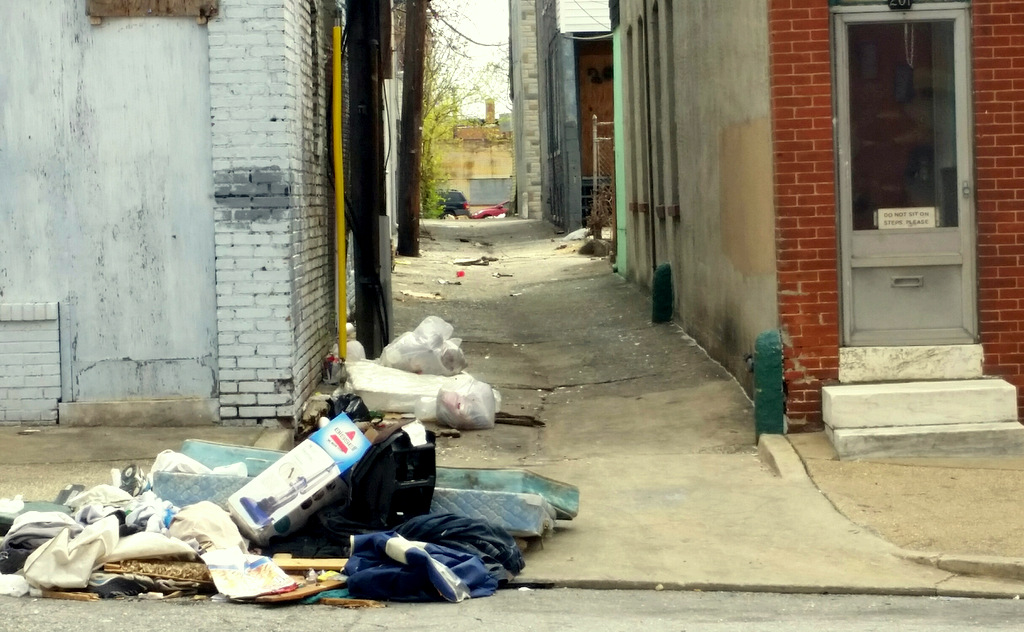 Will “smart” garbage cans have a significant impact on the amount of loose garbage dropped in alleyways and streets? (Mark Reutter)