A vacant lot in West Baltimore would become a $114 million laboratory and office complex if the City Council passes legislation to give the project a sizable public subsidy to help get it underway.

On behalf of the Baltimore Development Corp. and the Rawlings-Blake administration, Council President Bernard C. “Jack” Young introduced a bill yesterday that would create a Tax Increment Financing (TIF) District within the University of Maryland BioPark on the west side of downtown.

What makes this TIF district unusual is that it would be created specifically for a single building, as opposed to the larger multi-building districts that have received TIF financing, such as Harbor Point.

The building in question, called 873 West Baltimore, is an eight-story, 250,000-square-foot laboratory and office building that would be developed by Wexford Science + Technology, which owns the land. It would contain research laboratories, office space and “incubator space” for multiple tenants.

CIC, formerly known as Cambridge Innovation Center, has agreed to occupy more than 100,000 square feet. It would be CIC’s first project in Baltimore.

The University of Maryland BioPark has requested city approval of a TIF of up to $17.5 million to help fund the development.

This project was discussed in a closed-door session of the Baltimore Development Corp. in September. At the time, BDC officials declined to say whether they would back TIF financing for it. 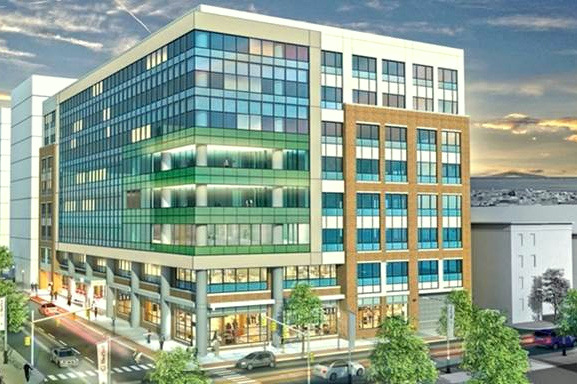 Rendering of the eight-story building. (University of Maryland BioPark)

“The development of 873 W. Baltimore Street is critical to moving the BioPark and economic development in West Baltimore forward,” BDC executive vice president Kimberly Clark wrote in an October 27 memo to Young.

“Baltimore is in need of additional wet lab research space to attract new companies, as well as retain existing Baltimore biotech industries within the park seeking to expand.

A TIF is a funding tool used by cities to leverage public and private investment in targeted areas. Funds are often used to build and repair roads and other infrastructure or clean up polluted property.

A TIF is considered to be a “public subsidy,” even though its money does not come directly out of government coffers.

In this case, the funds would be used specifically to build portions of the building’s interior, rather than finance exterior improvements to the area.

The project would be part of a state-designated “RISE” zone, a new kind of Enterprise Tax Zone benefiting institutions and government-related non profits.

If the TIF package is approved, as expected, by the City Council, 873 West Baltimore would be the BioPark’s third commercial laboratory and office building, according to the BioPark’s website.

It would be the first project in Baltimore to be built under the RISE (Regional Institution Strategic Enterprise) program. College Park is another state jurisdiction working to build a project under the RISE designation.

Gaudreau Inc. is the architect for the building and Colliers International is handling leasing.

The developers, Baltimore-based Wexford, seem optimistic that the project will move forward. The site already has been partially excavated, and a large construction sign promises completion in 2017.