There were gasps at a Roland Park meeting when a woman opposing a planned cycle track used an epithet in response to another woman who called for the fractious crowd to come together as a community.

“F___ your community!” the woman yelled in a ragged voice, going on to say that she feared that the planned transformation of the Roland Avenue bike lane to a protected bike lane, or “cycle track,” would threaten her children’s safety.

The distraught woman re-entered the room to apologize at the monthly meeting of the Roland Park Civic League where about 200 people (roughly evenly split between the pro- and anti- contingents) had gathered to hear about the track from the Department of Transportation.

The profane outburst was only one emotional moment among many that flared in the basement of the Roland Park Presbyterian Church on Wednesday evening.

Another came when resident Matthew Nayden asked if there was anything opponents of the plan could do or say to stop it from going forward. The answer from DOT officials was “no.”

Since the meeting, opponents of the long-planned project have been meeting to discuss a number of options, including legal action against the city.

“Curbside parking is part of our property value,” said Mary Kay Battafarano, who lives in the 4500 block of Roland Avenue. She said opponents are also considering filing a complaint under the Americans with Disabilities Act on behalf of residents living along the street who are disabled.

Battafarano said she and other opponents have been bombarding city officials with calls, emails and a petition with “hundreds of signatures” calling on the city to suspend the plan and consider alternate designs.

Speaking with The Brew by phone yesterday, she said they also have a Facebook page, an alternative design proposal and have broadened their concerns beyond the cycle track issue.

“There are some who say we should form our own association,” Battafarano added, “because we’ve been ill-served by our own leaders as well as the city.”

An “Inside” Cycle Lane

The plan that has ignited a civil war in this North Baltimore community would create a bike lane on the inside of the avenue’s parked cars, next to the sidewalk.

The design includes a two-to-three-foot “buffer” space intended to ensure that passenger-side vehicle doors would not swing into the path of cyclists.

The target area for the cycle track, north- and south-bound Roland Avenue between Cold Spring Lane and Northern Parkway, has until recently had a bike lane on the outside of the parked cars. (The lane lines were obliterated by this summer’s road repaving of Roland Avenue.)

To critics, the six-to-seven-foot width of the track violates federal guidelines, which call for an eight-foot minimum width where parked cars are the buffer. Roland Avenue, they say, is simply too narrow to fit in the proposed track.

But to supporters and transportation officials, the new configuration will slow traffic and make the street safer by encouraging more people to use bikes over cars.

“Tom Palermo was a neighbor of mine. He died in an unprotected bike lane in this neighborhood,” said Penny Troutner, referring to the fatal hit-and-run crash in which a drunk Episcopal bishop, Heather Cook, struck the 41-year-old cyclist and father of two last December on Roland Avenue north of Northern Parkway.

Troutner said she has feared for her sons’ safety on Roland Avenue when they bike to see their grandparents. She thanked the Civic League for backing the change, saying, “You’re bringing Baltimore into the 2oth century.” 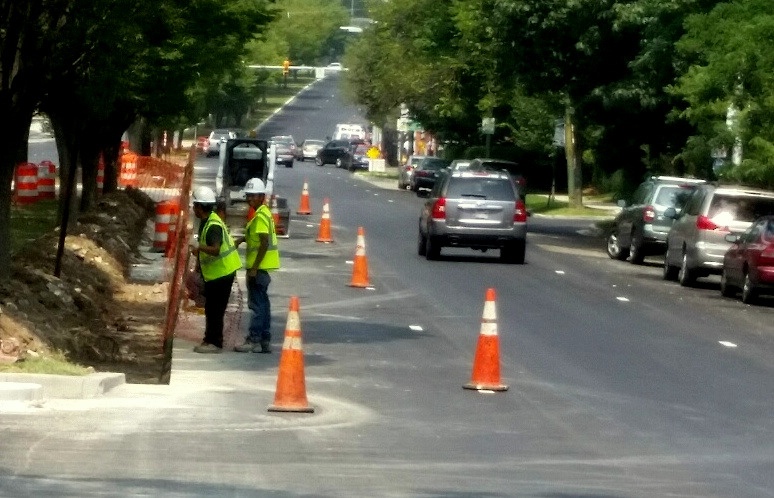 Roland Avenue back in August. The cycle track would be built along the far right curb. Parked cars would be moved six-to-seven feet closer to the traffic lanes as a buffer for cyclists. DOT says the current two traffic lanes would be narrowed to 10-1/2 feet each. (Photo by Mark Reutter)

Attorney Jon Laria, chairman of the Mayor’s Bicycle Advisory Commission, also spoke in favor of the track, noting that the proposed design is common in other cities.

“Everybody is afraid of it, but if you go out into the world, this is what cycle tracks look like,” he said. “There’s nothing aberrational about the design or the location.”

Measuring from the curb, the bike lane would extend 4-1/2 feet, the buffer zone would be 2-3 feet wide and the parking lane would be 7 feet wide, Paul Goldbeck, DOT project manager, said at the meeting.

Another change from the original plan: smaller lanes for moving traffic, which transit bureau chief Veronica McBeth said would slow down vehicles that regularly exceed the posted speed limit on Roland.

“We are narrowing the lane widths to about 10-1/2 feet for each lane which is still within state highway and federal highway administration compliance,” she said. According to McBeth, 14,500 cars per day traverse the streets of Roland Park and, in particular, Roland Avenue.

Many speakers said they worry about their safety getting in and out of cars so near to moving traffic.

“You still utilize your. . . natural senses that you would when you’re getting in and out of your car,” McBeth responded.

“Obviously stepping out on the driver’s side, you’re going to look and make sure that there’s no moving traffic, and same way when you are opening your passenger door to the buffered part of the bike lane.”

Another DOT official at the meeting said the parked cars will be about as close to moving traffic as they are on Keswick Road near the 36th Street intersection.

Included in the design, McBeth said, will be “flexposts” placed 5-10 feet apart before and after intersections.

With many opponents objecting that they were given no notice about the track, Civic League officials took pains to document that it has been part of the Master Plan process for years and to list the meetings, charettes, notices in the community listserv and stakeholders’ discussions going back years.

Also on the defensive: Councilwoman Sharon Green Middleton, who represents the community.

“I want to let you know that the last couple years there has been constant communication. . . I have always, if I’m not at these meetings, I have representation,” she said. “I follow through and know what’s going on. I wanted to make that clear because the last couple weeks have been very, I’ll just say, interesting.”

McBeth said that DOT had done its “due diligence,” noting that she had been to “10-plus meetings” with the community in which the track was discussed.

“We’ve been more than responsive on a number of occasions,” she said. “We took this all the way to City Hall, all the way up the chain, and we have support from our mayor, we have support at the councilmanic level and, as such, the project is going to move forward.”

And with that, half the room burst into enthusiastic applause.

And the other half did not.