Baltimore needs to expand the boundaries of the Marble Hill Historic District if it wants to do more to protect buildings that reflect the area’s rich civil rights and African-American histories, the director of the Commission for Historical and Architectural Preservation (CHAP) says.

Eric Holcomb said the agency was alerted recently that Bethel AME Church was about to tear down a rowhouse that was the home of the first black member of the City Council, Harry Sythe Cummings, who was elected in 1890.

But Holcomb said his office had no authority to stop the demolition – or hold a hearing to elicit community feedback – because the house, at 1234 Druid Hill Avenue, was just outside the boundaries of the Marble Hill Historic District.

Had the house been on the north side of Lanvale Street rather than the south side, he said, the church would have needed the CHAP’s approval before it could proceed with demolition. The process would have triggered a public hearing.

Holcomb said the Marble Hill area is full of houses and other buildings with direct ties to local black history, including properties linked to civil rights leaders Clarence Mitchell and Juanita Jackson Mitchell. Many of the properties lack the protection of landmark designation.

From the standpoint of American history, “it’s a really important area, nationally significant,” Holcomb said. “With this demolition, it may be time to expand the boundaries” of the historic district.

Holcomb’s advice came as more than two dozen demonstrators gathered across the street from Bethel AME Church yesterday afternoon to protest the demolition of the Cummings residence and call for a ban on demolitions in the area without the owner notifying and consulting with the community first.

The lot where the Cummings house stood is just across the street from the church at 1300 Druid Hill Avenue. 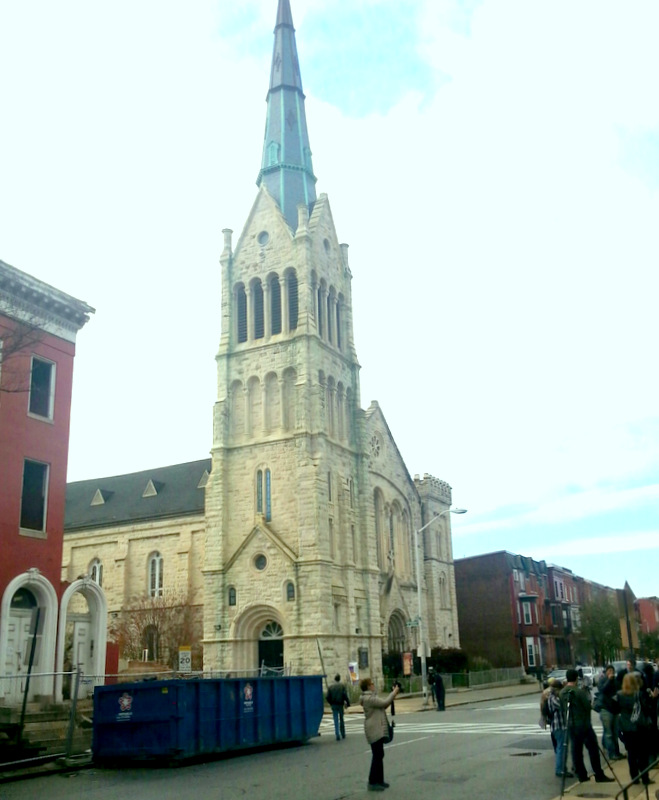 The razed building (at left) is across the street from the Bethel AME Church. (Photo by Ed Gunts)

There was nothing left of the building but a chimney, the wooden frame of the front door, and a pile of bricks as high as a person.

Under the leadership of Pastor Frank M. Reid III, Bethel AME has carved out a powerful political niche. It is the church of former Mayor Sheila Dixon, Comptroller Joan Pratt, two former deputy mayors, and other businessmen and politicians.

On the church’s website, Rev. Reid describes the civil rights leaders as well as “top authors and thinkers” who have visited or preached at Bethel AME.

Yesterday’s protesters noted that the same church owns and has a fence around the adjacent house at 1232 Druid Hill Avenue and appears to be getting ready to tear that down as well.

“We are Losing our Civil Rights History”

The protesters say they want the city to step in and establish better procedures for notifying the community about pending demolition activity.

Louis Fields, director of the Baltimore African American Tourism Council, said the group wants to meet with Reid and talk about the church’s demolition plans.

“Instead of tearing down houses, a preacher is supposed to build up houses,” Fields said  “Why did this pastor not think enough of the city to call somebody?”

Marble Hill is “not just one of the hubs of civil rights history in Baltimore,” added Johns W. Hopkins, executive director of Baltimore Heritage, a citywide preservation advocacy group. “It is THE hub.”

Marble Hill is bounded roughly by Laurens Street on the north, Division Street on the west, Lanvale Street on the south and McCulloh Street on the east. Many historically significant properties are just outside of those boundaries, preservationists say. 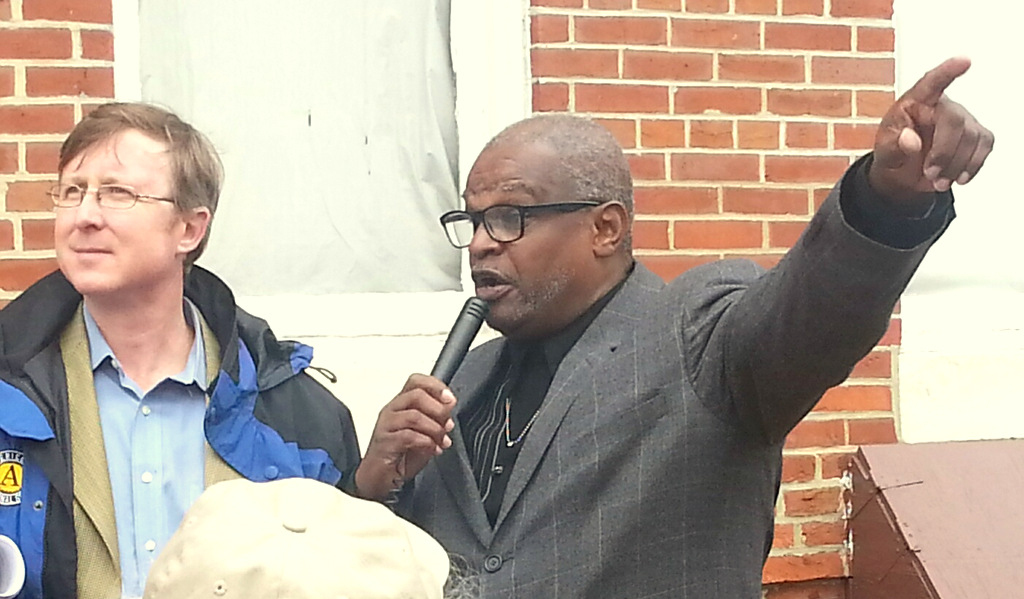 Besides being Cummings’ home, the demolished rowhouse building was an early meeting place of the Baltimore chapter of the NAACP and other groups, preservationists said.

At one point it was known as the Freedom House. Area residents say it was vacant for at least five years before its demolition, which started last month.

The protesters acknowledged that the church owns the building and obtained the necessary permits from the Housing Department before starting demolition. They said they were upset that church leaders didn’t let the community know what they were planning to do and seek community feedback ahead of time.

Historic Marble Hill Community Association president Steva Komeh-Nrumah said she believes the church razed 1234 Druid Hill Avenue to make way for a parking lot but isn’t positive about that. One preservationist at the demonstration said he heard that the church plans to construct a building in place of 1232 and 1234.

Fields said the preservationists have been unable to contact Reid to request a meeting.

A woman who answered the phone at the church yesterday said Reid was not available and the church had no comment about the demonstration. She declined to answer other questions.

The demonstrators said they will be attending meetings of community organizations in Upton and Marble Hill to build support for their efforts to save historic buildings in the area.

Civil rights pioneer Helena Hicks suggested that the demonstrators show up at the Bethel Church on Sunday morning.

Fields said he still hopes that Reid will meet with the protesters. “The church had every right to do what they wanted with their property, but they also have to respect our history,” he said. “All we are saying is, please be respectful enough to have a discussion with us.” 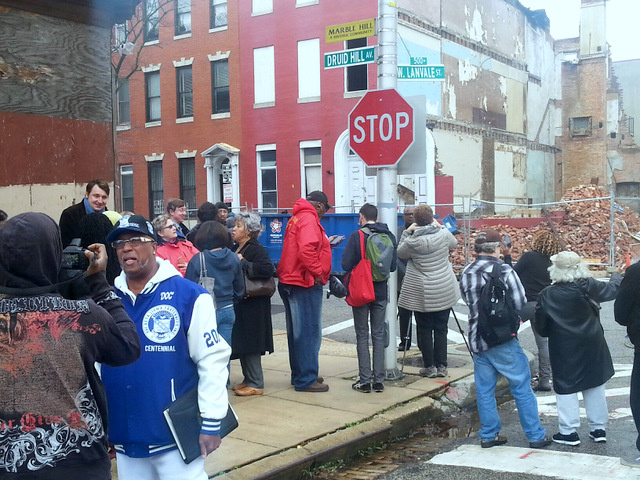 Protesters gather across the street from where the Cummings house was razed. (Photo by Ed Gunts)