Sixty years ago, African American students at Morgan State College couldn’t go to the movie theater at Northwood Plaza, just down the road from their school campus.

Likewise, solely because of their race, they were not served in the Rooftop Restaurant at the Hecht Co. department store at the shopping center or at Arundel’s Ice Cream Parlor.

It took years of protests, sit-ins and arrests – hundreds were hauled off to the city jail – before those businesses agreed to admit blacks.

Today, Morgan State University, a historically black institution, not only owns much of the land where these battles were fought, but just opened a $72 million academic building there called the Morgan Business Center.

Home of the Earl G. Graves School of Business and Management, the six-story center is the first of at least three buildings that will make up a new “west campus” that Morgan plans for the former Northwood property near the intersection of Hillen and Havenwood roads. 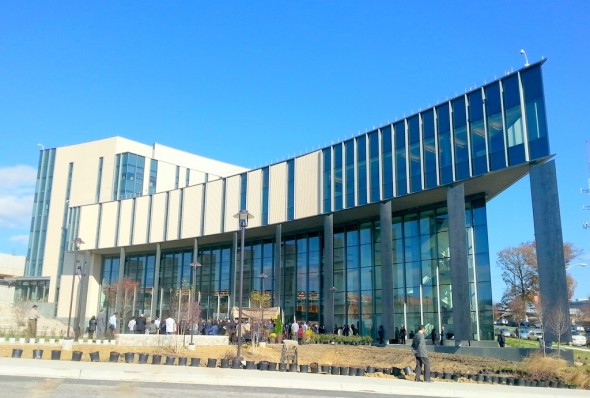 Because of the site’s history, a ribbon-cutting ceremony last Friday was far more than just the opening of a new campus building.

University President David Wilson told several hundred people who gathered for the ceremony that the event marks “the grand opening for a new era of thinking about how Morgan State will change the world.” He said it is also the result of a concerted effort to build educational facilities that are as good as those of any teaching institution in the country. 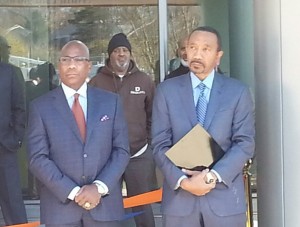 “Today we are standing on sacred ground,” Wilson said, “that means so much to this institution, our alumni and our current students. And it should mean just as much to this city and this state.”

Wilson then told a bit of the story that many in Baltimore know well, but that has been overshadowed in the national consciousness by the more celebrated Greensboro, N.C., Woolworth’s lunch counter sit-in that actually took place later, in 1960.

In 1953, Morgan students began sit-in demonstrations at a Read’s drug store near the campus, protesting the refusal of Read’s to serve blacks at its lunch counters.

Sit-ins there and at Read’s flagship store on Lexington and Howard streets led the chain eventually to end racial discrimination at all of its 37 stores.

Morgan students then began to demonstrate at other businesses near campus, including Northwood Plaza’s ice cream parlor and movie theater.

News stories describe the protesters in 1963 coming to the theater asking for a ticket, sometimes in French, then being hauled off to jail in police vans.

In the end more than 400 Morgan students, along with some from Goucher College and Johns Hopkins University, were arrested. 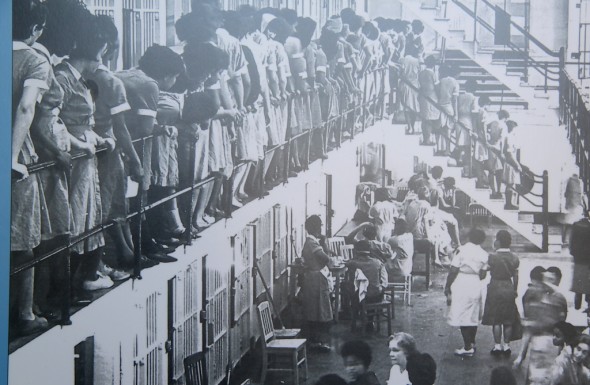 Women’s section of the city jail where students were held after protesting the Baltimore theater’s whites-only policy. (Morgan State University)

“It was arguably here on this soil – Northwood Shopping Center and elsewhere in Baltimore – in the forties and fifties that the first student protests of the civil rights movement in this nation were held by students of Morgan State College,” Wilson said.

Wilson said today’s students are benefiting from efforts not only to end discrimination but to improve the quality of teaching facilities and technology at historically black universities. 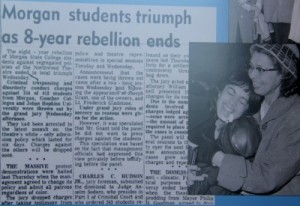 Coverage of the dropping of charges against students arrested for protesting at the Northwood Theater. (Morgan State University exhibit, Baltimore Afro-American newspaper clipping)

“This business building, he said, “is going to provide our faculty with the tools they need to teach at a higher level and our students with unique opportunities to be innovators on the global stage and to learn in a world class environment that is second to none.”

Morgan students “deserve the best that we can give them, and this is going to provide that and more,” said Fikru Boghossian, dean of the business school. “It not only serves as an attractive focal point for the campus, but it also serves as a great tool to support our outreach efforts to attract the top students and the most talented faculty.”

The school is named after Earl G. Graves Sr., the founder and publisher of Black Enterprise magazine.

Its new building was designed by two architecture firms that have designed academic buildings for some of the best colleges and universities in the country, Kohn Pedersen Fox Associates of New York and Ayers Saint Gross of Baltimore.

The 140,000-square-foot business center features a Center for Innovation, computer labs, classrooms, seminar rooms, and a 299-person auditorium. On an upper level is a room that, from some angles, looks like a space ship and is set up as a stock trading floor. 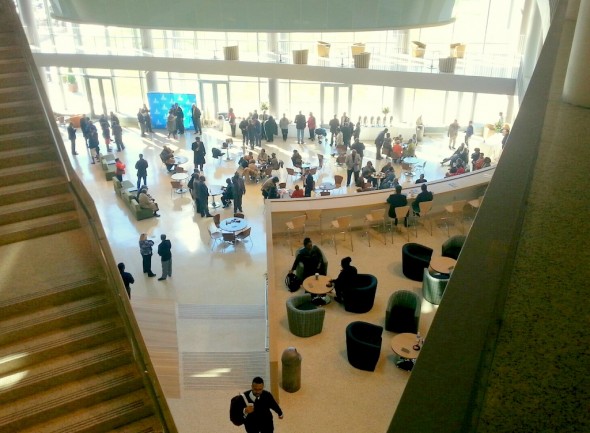 The ribbon-cutting event for the new Morgan Business Center. (Photo by Ed Gunts)

The building also contains a demonstration kitchen and 10 hotel rooms that will be operated by the school’s hospitality management program. Building features include a central atrium that can double as a meeting or performance space and a large green roof.

The business center replaces the former Hecht building, which occupied the east end of Northwood Plaza. The store was split up and turned into branches of a Hechinger’s hardware store and a Burlington Coat Factory before Morgan acquired it.

The west campus will be connected to the main campus by an $8 million, 660-foot-long “legacy bridge” across Hillen Road for pedestrians and cyclists. 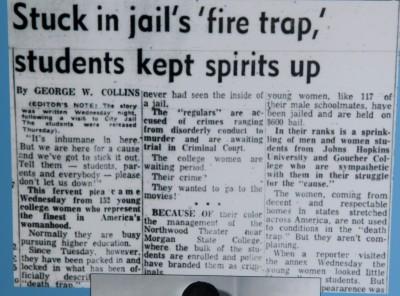 A reporter’s account of conditions at the city jail where students were held. (Morgan State University exhibit)

The bridge will bear the names of several hundred Morgan students and faculty members who took part in civil rights campaigns to end discrimination by businesses at Northwood Plaza and elsewhere, including many who were arrested for protesting.

During the event on Friday, speakers shared their views about Morgan’s role in fighting for civil rights and how the new building will make a difference.

State Sen. Catherine E. Pugh (40th District), who is running for mayor of Baltimore, said she is a Morgan State business school graduate and values her years there.

“Everything that I am began right here,” she said. “This is the place where I grew up and the place that I call home. I tell folks that if you have a business degree from Morgan State, you know how to run anything. This university is a beacon of light not just to the city, not just to the state, but to the world.”

State Sen. Nathaniel J. McFadden (45th District) said he remembers getting off the bus on Loch Raven Boulevard 51 years ago and walking to Northwood shopping center at a time when “I was not welcome in this community.”

McFadden said he believes the new building will help Morgan produce the business leaders of the future. He said Kevin Plank, CEO of Under Armour, “won’t have anything on the students we turn out in this institution.”

The rest of the Northwood Plaza property is under separate ownership and remains open as a strip shopping center that occasionally makes the news. In 2007, former City Councilman Kenneth N. Harris Sr. was fatally shot there. 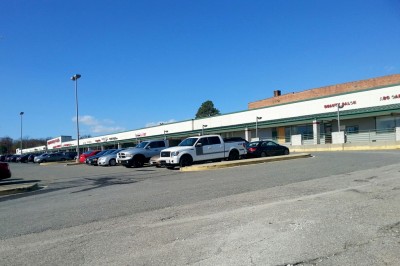 A portion of Northwood Plaza that remains under separate ownership. (Photo by Ed Gunts)

With Morgan’s aggressive move across Hillen Road, Northwood Plaza is expected to change.

Wilson said the university has been talking with the center’s owners with the goal of seeing them tear down the rest of it and “start over” with new shops, restaurants and perhaps housing to serve the university and greater Northwood community.

He wants the quality of the new development to be commensurate with the $200 million worth of improvements Morgan State is making on the west side of Hillen Road.