On the eve of her trip to Paris to represent Baltimore at the United Nations climate change meeting, Mayor Stephanie Rawlings-Blake was asked her position on an incinerator proposed in her city that would arguably worsen the problem.

The Fairfield Renewable Energy Project, proposed for an industrial peninsula near Curtis Bay, would burn 4,000 tons of waste a day and emit a number of toxic particulates, including  240 pounds of mercury a year, under its permit.

Altogether, the plant would release more than 2 million tons of greenhouse gases annually

On the radio Monday, the mayor was reminded of those facts that have been reported in The Brew, repeated in The New York Times and other media, and cited over the last five years by environmental attorneys, neighborhood activists, schoolchildren and other opponents.

“So what about that, right in our back yard?” WEAA’s Marc Steiner asked. “Does the mayor’s office have a position on this incinerator, whether or not it should be allowed to be built?”

“I don’t have the information on exactly what pollutants are being released as a part of that incinerator,” Rawlings-Blake replied. “I can certainly get back to you after I get the full information.”

Steiner persisted. He wasn’t asking her about specific pollutant amounts.

“The city doesn’t have a position on whether they support or don’t support the idea of the incinerator being built?” he said.

“You want me to make a decision or give you an opinion without information. I’m not going to do that,” Rawlings-Blake said, bristling. Steiner let the subject go.

The mayor will be in Paris from December 4-6, leading a U.S. Conference of Mayors delegation to the U.N. Framework Convention on Climate Change’s 21st Conference of Parties.

“Proud to Have This Project” 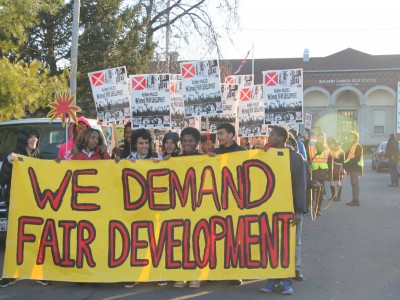 A 2013 protest by Benjamin Franklin High School students whose school is  less than a mile from the incinerator site. (Photo by Fern Shen)

The project has been in limbo and no substantial construction activity has taken place there since October 2013.

There was mayoral silence when the project came into question back last February.

A regional consortium that included the city was recommending the cancellation of its power-purchasing agreement with Energy Answers. Did the mayor still support the project? Her spokesman at the time, Kevin Harris, did not reply to our query.

Lately, the incinerator has been back in the news.

A coalition of activists has been pressing the Maryland Department of the Environment to declare the project dead on the grounds that its 2010 permit would expire if no substantial work has taken place there for 18 months. MDE has given the company until next week to prove that its permit is still valid.

For the mayor to plead ignorance was puzzling – and not just because the project has such a high profile and intense opposition.

For one thing she was one of its early backers, speaking enthusiastically about the Energy Answers project at its October 18, 2010 onsite kickoff event. 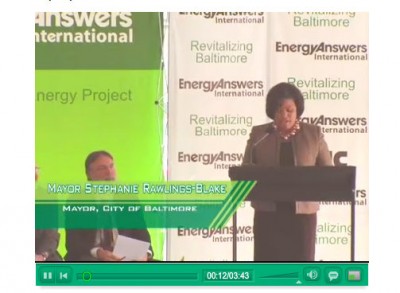 Still from video of the project kickoff, featuring Rawlings-Blake and others, on Energy Answers’ website.

“This is truly a great day in Baltimore. This project will allow city government and surrounding jurisdictions to add more renewable energy to our regional portfolio,” Rawlings-Blake said, according to a video on the Energy Answers website.

“This project is a national model for green renewable energy and I’m proud, really proud to have this project in Baltimore City,” she added, standing next to Energy Answers CEO and chairman Patrick F. Mahoney.

Among the others in the video who spoke that day: U.S. Rep. C.A. (Dutch) Ruppersberger; Fred Redmond, vice president for human affairs for United Steelworkers; and then-governor Martin O’Malley.

Another reason Rawlings-Blake may have familiarity with the Fairfield incinerator? Its principals have contributed significant campaign dollars to her and her political allies.

A Brew analysis of 2010-11 contributions showed that O’Malley, who signed an energy credit bill that benefited Energy Answers, received $9,000 from the company.

Former Lt. Gov. Anthony Brown received $8,000, and Rawlings-Blake’s campaign committee picked up $1,500 as she was heading into the 2011 mayoral election.

Even more generous was Energy Answers’ contribution to the Democratic Governors Association (where there are no legal limits on the amount of private donations).

Seven months later, O’Malley was named chairman of the DGA.

Before the subject of the incinerator came up on the radio program, Rawlings-Blake had much to say about the environment. She explained to Steiner why she was leading a mayors’ delegation to the Paris climate change conference later this week. 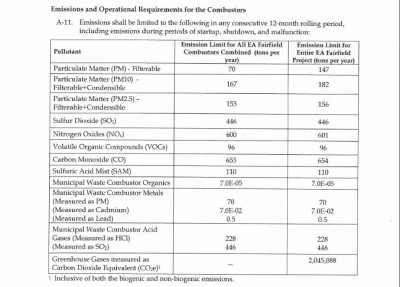 “As president of the U.S. Conference of Mayors, we will convene with mayors from around the world to talk about what we can do as mayors to control climate and climate change and influence the world’s climate,” she said.

How, Steiner asked, does this play out in Baltimore?

“What we see not just in Baltimore but around the country is mayors leading on climate change,” Rawlings-Blake said, going on to explain:

“So we are taking a grassroots approach to something that matters to all of us as we are being good stewards of our environment.”

– Mark Reutter contributed to this article.