On September 12, Howard County police went to the couple’s Prestwick Drive home responding to a report of “a domestic assault in progress” being alleged by Pearre’s wife, Nancy L. Pearre.

Officers said at the time they found the 61-year-old bleeding from her head and with lacerations in her left thumb. She told police that her husband “had pushed her when she was trying to take her vehicle.”

According to documents on file in the case, she said she fell back from the force of his push and hit her head on the car door. She said her husband then “shut her head in the car door” and “fled the scene” in a Ford Expedition.

Today in court, with her husband facing a single charge of second-degree assault, Nancy Pearre told Howard County Assistant State’s Attorney Amy E. Hott that she had decided not to testify.

“No one coerced you?” Hott asked her, in the presence of District Court Judge Edward Axel.

“No,” Pearre replied. She testified that she and Pearre had married on April 20, 1980 and that they were married at the time of the incident.

In Maryland, a person has a one-time opportunity to invoke the right not to testify against a spouse in a domestic violence case, Hott explained to her.

Judge Axel then declared Pearre not guilty and the parties left the courtroom.

Nancy Pearre declined to speak afterwards with The Brew.

Robert Pearre, whose office is charged with investigating allegations of waste, fraud, abuse and misconduct by Baltimore City employees and to promote public integrity, also declined to be interviewed.

A former FBI agent, Pierre was hired by Mayor Stephanie Rawlings-Blake as inspector general in May 2013 and is currently paid $138,000 a year.

“She told the state’s attorney’s office she recanted. She said she was upset at the time and she was mistaken and she wanted to take it back,” said Muffoletto, noting that his client “has maintained his innocence.” 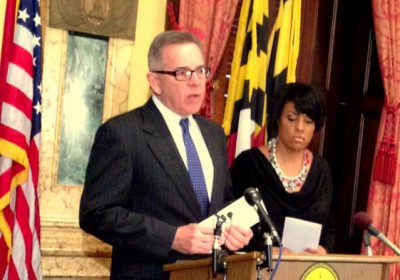 Inspector General Robert Pearre speaks to the media about one of his investigations next to Mayor Rawlings-Blake. (Brew file photo)

Muffoletto earlier told The Brew that Nancy Pearre’s injuries were caused when she fell inside the home and hit her head on a door.

Asked if there was written record of Nancy Pearre’s recantation, Muffoletto said, “No, it’s not in the record. It came out in discovery.”

The clerk’s office said it was not able to make the case file available today.

Although Pearre received a favorable disposition, it was not precisely the outcome desired by the parties.

Prior to the start of the judicial proceedings, Nancy Pearre told Hott she wanted the state to drop the charges against her husband.

“It was an accident. I want to drop it,” Pearre said, visibly agitated.

“Based on what you’re telling me, I’m not comfortable dropping this,” Hott told her, advising her to invoke spousal privilege.

“For the record, I disagree with this,” Muffoletto said.

Afterwards Hott was asked why she declined to dismiss the charges.

“I would only do that if I were convinced nothing happened,” she said. “I really have no way of knowing what happened one way or the other.”