Baltimore police tonight arrested seven people –  including a high school student and a local physician – during a protest against a proposed South Baltimore trash incinerator held at Maryland Department of the Environment headquarters.

About 100 people had gathered in late afternoon outside the building at Montgomery Park to call on the state to extinguish the 2010 permit awarded to Energy Answers International to build a trash-to-energy plant near Curtis Bay.

“Arrest the polluters!” they chanted, waving to passing motorists. “Pull the permits!”

They had planned to go inside, single-file, and drop off petitions they had made on sunflower-designed fliers, but they were prevented by MDE staff from entering the building, according to Gregory Sawtell, an organizer with United Workers. 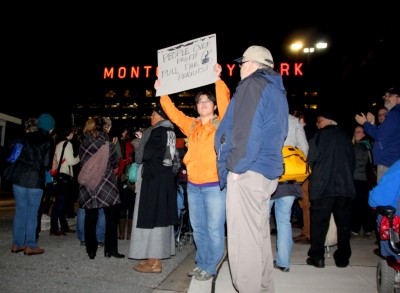 “This is a public building, a place where people go to do business with a government agency, and we can’t go there?” Sawtell said.

After two members of the group were allowed inside to speak with Secretary Benjamin H. Grumbles – and emerged eventually to report that Grumbles planned to take no action – seven others went inside, Sawtell said.

“They decided to do a civil action and refused to leave” until the agency agreed to cancel the permit for the project, Sawtell said.

Cuffed and Placed in Police Van

By early evening, the seven were texting Sawtell and United Workers organizer Luis Larin to say that they were going to be arrested.

About a half dozen vans, a dozen police cruisers and more than 50 police officers (including some with riot shields in their vehicles) responded to the scene.

“I don’t like seeing those vans,” one of the protesters said. “They give me a bad feeling. I hope they have seatbelts.”

(This was a reference to the case of Freddie Gray, who died last April, prosecutors say, of injuries suffered in a police van in which he had not been secured with a seatbelt.)

Some of the people inside emailed photos of themselves being placed in handcuffs, before their cellphones were taken away and they were driven off, presumably to Central Booking.

“They said to them, ‘You cannot leave, so now you will be arrested,’” Larin said. 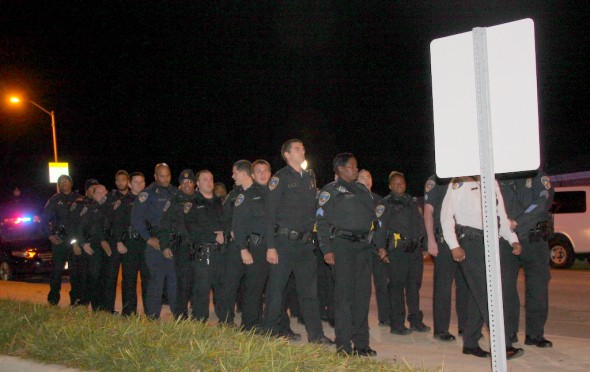 Baltimore police standing by as detainees are driven off and protesters chant, “We’ll be back.” (Photo by Fern Shen)

An internist at Sinai Hospital, DuBois recently had an op-ed published in which she describes the health effects of polluting emissions from incinerators. She called for the scrapping of the Energy Answers plant, proposed to be built less than a mile from a city school.

Free Your Voice organizer Destiny Watford said Grumbles listened to her concerns when she spoke with him, but told her he was giving the company until January to respond.

Previously, MDE officials had given Energy Answers until December 7 to submit documentation showing why its permit remains valid. 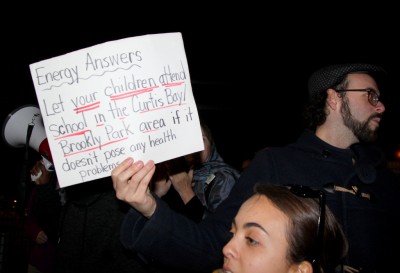 Youth, community and environmental groups have been opposing the so-called Fairfield Renewable Energy Project for years. (Photo by Fern Shen)

Free Your Voice, United Workers, the Environmental Integrity Project and other community and environmental groups have argued that by allowing more than 18 months to pass without doing any substantial work onsite, the company had let its “Certificate of Public Convenience and Necessity” lapse.

By their reckoning, opponents say, the company needed to resume construction before May 1, 2015, to remain in compliance with the permit. (“We were simply following up on the letters and petitions we submitted in August,” Sawtell said.)

According to Father Ty Hullinger, pastor of St. Anthony of Padua, St. Dominic and Most Precious Blood Churches, Grumbles seemed to understand that the permit is expired.

“Everything about his language suggested he got it,” said Hullinger, who accompanied Watford inside. “But when I asked him directly, ‘Is this permit expired?’ he didn’t answer.”

We will update this story. 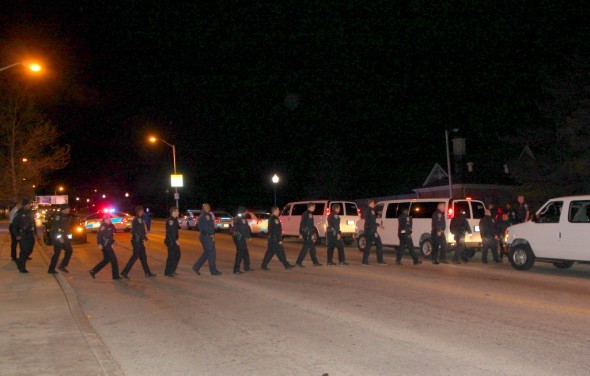 UPDATE:
THIS COMMENT JUST IN FROM MARYLAND DEPARTMENT OF THE ENVIRONMENT SPOKESMAN JAY APPERSON

Regarding arrests — the Department of the Environment has no involvement. The Department is a tenant at Montgomery Park, so the arrests are a matter involving the building management and the police.

Here is a statement from Secretary of the Environment Ben Grumbles: “The Department of the Environment deeply appreciates knowing the views of citizens and advocacy groups on this project. We are committed to following applicable laws and regulations and to ensuring permit conditions are respected and enforced. The Department will provide an update after we complete our review of the most recent information submitted by the company.”