Tom Coplin came to City Hall with a suggestion for how to improve Baltimore’s finances and solve the dilemma about what to do with its Confederate monuments at the same time.

“These statues should be sold,” he said last night. “I believe they would fetch up to $10 million because some people love them so much. The city could certainly use the money.”

But Rosalind Ellis Heid wants to keep the monuments where they are, and perhaps add new information, so they can be a “teaching tool” for future generations.

“With the proper signage, these Confederate monuments can instruct us about American history,” she said. “They must never be moved or demolished.”

Coplin and Heid are at opposite ends of the spectrum of public opinion about what to do with Baltimore’s four Confederate monuments. They were among more than 70 people who came to City Hall to attend a public hearing on the subject.

The meeting was held by a mayoral panel formed last June to determine whether the city-owned monuments ought to be altered or removed from city property.

Mayor Stephanie Rawlings-Blake formed the commission shortly after nine people were shot at a black church in Charleston, S.C. Photos later surfaced of the shooter, Dylann Roof, posing with the Confederate flag, and that started a nationwide debate over public references to the Confederacy.

Since then, many cities and states have begun to evaluate their holdings to see what Confederate-related statuary or artifacts may be offensive to residents or inappropriate for display on public property.

The Baltimore monuments under review are the Confederate Soldiers and Sailors Monument in Bolton Hill (also known as The Spirit of the Confederacy), the Confederate Women of Maryland monument at Bishop Square Park at Charles Street and University Parkway, the Robert E. Lee and Thomas J. “Stonewall” Jackson Monument in Wyman Park, and the Roger B. Taney statue in Mount Vernon.

The seven-member panel will make a recommendation to the mayor early next year. Yesterday’s hearing was the panel’s main occasion to hear testimony from the public.

The four options under consideration are:

• Leave the monuments exactly as they are.
• Keep them with conditions, such as new signs or other changes to help explain them or put them in context.
• Relocate the monuments, but keep them as part of the city’s inventory.
• Remove the sculptures and de-accession them from the city’s collection. 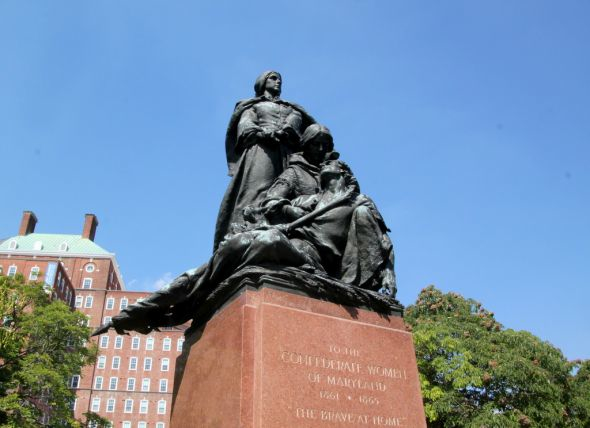 The Confederate Women of Maryland is one of four city-owned monuments commemorating the Confederacy. (Photo by Fern Shen)

A Range of Speakers

Each speaker got up to three minutes. Over the three hour meeting, the ideas expressed ran the gamut from Coplin’s sell-off to Heid’s preservation stance and everything in between.

In all, 30 speakers came up with just about every permutation of ways to treat the monuments, from keeping them all in place to removing them all from public property to removing some and maintaining others.

The people who testified were just as diverse as the ideas they expressed.

They ranged from Jan Barringer of Eldersburg, a  member of the Maryland Division of the Sons of Confederate Veterans, who wants to see the monuments stay in place, to Saratu Kehinde, an African-American eighth grader from the Greenmount School, who lives near the Lee and Jackson Monument and doesn’t believe children should have to look at it.

A slight majority of speakers seemed to favor the idea of keeping the statues in place and providing more information to provide more context.

But there was no consensus. The remove-the-monuments faction was well represented, too.

More than a few speakers suggested moving one or two monuments from public property and keeping the others in place.

The monuments with the least support for staying in place were the Taney statue and the Lee and Jackson monument. Speakers either wanted them moved into a museum, sent out of the city to another area, or scrapped altogether.

Much of the discussion came down to philosophy. Speakers seemed to base their recommendations on whether they thought it is erasing history to remove the monuments or whether the monuments are so offensive they shouldn’t be on public property.

The panel was told that there are legal considerations, too. According to city representatives, the Maryland Historical Trust has easements on all of the monuments except the Taney statue, which means that any changes would have to be approved by the Trust. 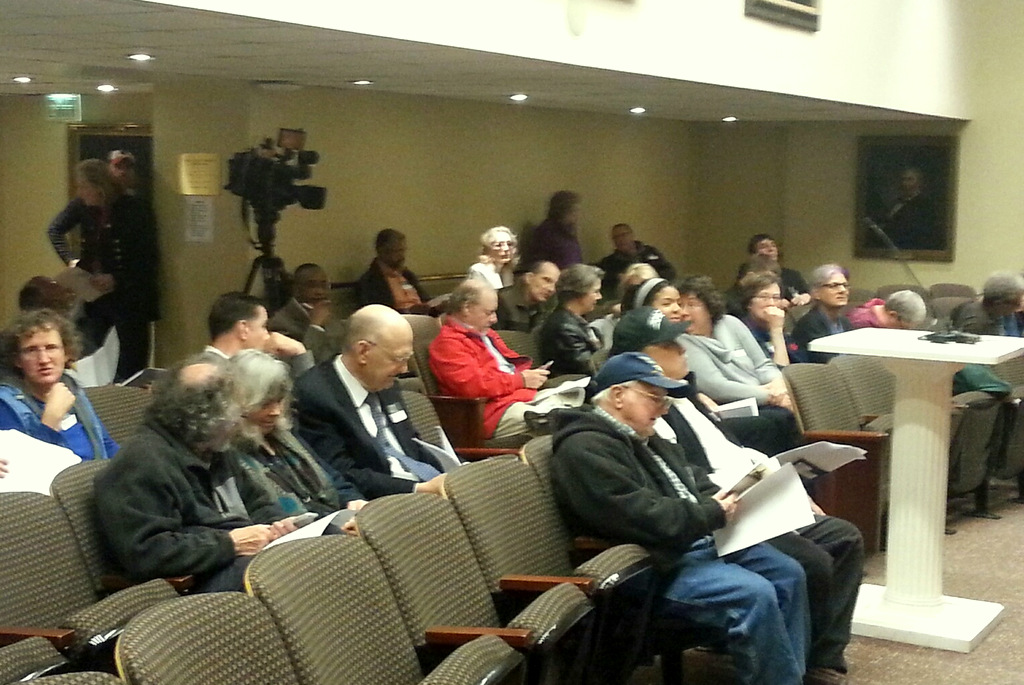 The hearing attracted a diverse, if mostly elderly, crowd. (Photo by Ed Gunts)

Carol Hall, an artist and activist, said she believes the monuments should be rounded up and put in a “Garden of Ignorance where they would have to stare at each other for all eternity.”

Owen Silberman Andrews, a college teacher, expressed similar sentiments. He said he believes the Confederate statues should be put in a museum “alongside [statues of] other people who have done terrible things in history.”

He also wants to see new monuments that celebrate the resistance of people to slavery, as shown by figures such as Harriet Tubman and Frederick Douglass.

Richard Chambers wants them removed from city property and not necessarily displayed anywhere else. “I think we should take these and, if we don’t sell them for $10 million, dump them in the Inner Harbor,” he said.

Bruce Barnett wants the city to take the statues of Lee and Jackson, melt them down, and use the metal to create statues of Union Generals Ulysses S. Grant and William Tecumseh Sherman.

James Loewen, a sociologist, offered a 10-point rationale for removing the monuments. He said the monuments are symbols of racism that “affront African Americans by honoring a cause that intrinsically embraces their enslavement” and “affront thoughtful European Americans by implying that most whites still support white supremacy” when they don’t.

Loewen said that “contextualizing” the monuments, “while much better than doing nothing, is problematic. If a picture is worth 1,000 words, then a massive three-dimensional statue is surely worth at least 10,000. Its hieratic size alone signifies, ‘This cause was great and we value it,’ no matter what words get posted nearby.”

Removing the statues “is not Orwellian,” he continued. “It does not erase history. On the contrary, it tells much more history, both at the place where the statues wind up and in the historical markers that will explain their absence at the sites where they were.”

At the other end of the spectrum were people who want the monuments to stay in place. They argued that if the city removes some monuments now, there could be pressure on the city to remove others in the future.

A recurring idea was to create more monuments to honor African Americans and to put them near the Confederate statues so they could be “in dialogue” with each other.

“Do not remove the monuments,” urged Deborah Rowen. “Instead, create something additional to highlight African Americans. We cannot or should not erase history. But we should learn from it.”

“We do not want to erase the past,” agreed Joaneath Spicer, an art historian. “If we erase it, we forget it.”

Spicer suggested sending the Lee and Jackson monument to Virginia and moving the Thurgood Marshall statue from Pratt Street to Mount Vernon Place.

Kimberly Sheridan suggested that the city erect a statue to Warner T. McGuinn, one of Baltimore’s first African-American city council members and a contemporary of Thurgood Marshall.

“I’ll find a sculptor,” she offered.

Paul Russinoff of Bolton Hill suggested creating a monument honoring three regiments of African American soldiers who fought for the Union during the Civil War, and placing it next to the Lee and Jackson monument in Wyman Park.

It would “force a conversation,” Russinoff said. “Tearing down statues or moving them to an obscure location wouldn’t give anyone hope or solve any problems.”

William Hellman of Baltimore wants to see a new monument to the “victims of the Confederacy.”

Tom  Chalkley, an illustrator and cartoonist, said he’d like to see more murals because he believes statues as an art form are “inert” and “antiquated.”

Chalkley said he believes Baltimore needs more art of all kinds that honors African Americas. “We do not have sufficient representations of African American people in Baltimore City,” he said. “Let’s have public art that tells the other side of the story and tells a new story.”

Several speakers said they were grateful for the forum. “We’re in a room with so many points of view and without having a war with each other,” Hall observed.

Robert Reyes said he is glad for the wide range of ideas. “This discussion is very healthy,” he said. “This is what America is all about.”