The comments ranged from praise for its “elegant simplicity” to criticism for it not being “transformational” or “visionary” enough to justify the cost – as much as $40 million.

Such was the mixed verdict for replacing the venerable McKeldin Fountain with a new plaza and water feature during a presentation to Baltimore’s design review panel yesterday.

The Downtown Partnership of Baltimore and its design team showed the plans to the Urban Design and Architectural Review Panel (UDARP) as part of an effort to win approval to demolish the 1982 fountain at Pratt and Light streets.

Leaders of the Downtown Partnership say some of their members don’t like the “Brutalist” design of the existing fountain, a memorial to former Mayor and Governor Theodore McKeldin, and want to replace it with a more welcoming gateway to downtown.

They say the new project has the full support of Mayor Stephanie Rawlings-Blake, stakeholders around the site and members of the McKeldin family.

But the replacement effort has stirred controversy with artists, architects and others saying the original fountain should be preserved because it is a city-owned work of art and is historically significant as a remnant of the infrastructure created when the Inner Harbor was revitalized starting in the 1960s. 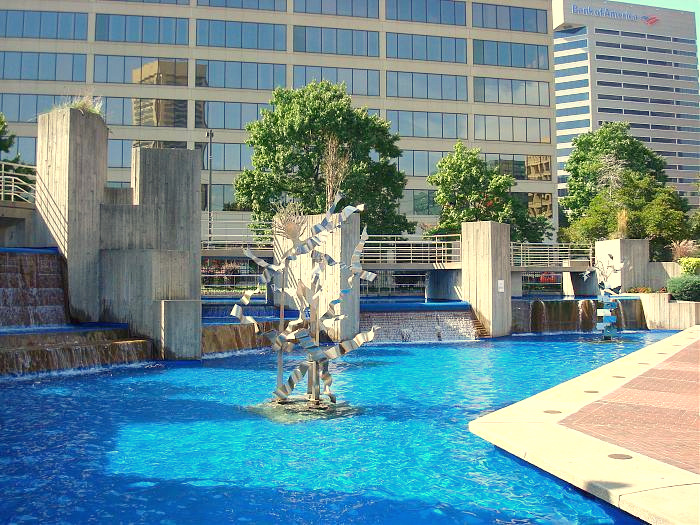 The McKeldin Fountain in operation two years ago. The Downtown Partnership says its “Brutalist” features are unwelcoming. (Brew file photo)

Other opponents of the replacement effort say the Downtown Partnership doesn’t own the fountain, and they fear the area now designated as a “free speech” zone will shrink or disappear.

Still others wonder how the plan will affect traffic flow at a very busy intersection (Pratt and Light streets). And yet another chorus of critics say many other city revitalization projects deserve attention and funding more than this one.

Downtown Partnership president Kirby Fowler said he doesn’t have a firm budget for the new design, which has previously been estimated to cost as much as $40 million.

Fowler said his organization has raised $3.4 million for the fountain demolition and the replacement, which would be built in phases, and continues to raise money.

Fowler said he hopes to see demolition of the fountain begin shortly after the conclusion of the Light City Baltimore festival planned for the Inner Harbor from March 28 to April 3, 2016.

He said the first demolition likely would be taking down the skywalks over Light Street that connect the Hyatt Regency Baltimore hotel with the Light Street pavilion of Harborplace.

“We’ve been through eight years of public meetings and. . . design charrettes, and I think we are getting very close to completion” of the design, Fowler said.

“We feel it is absolutely necessary” to tear it down, Fowler said. “We have stakeholders around the fountain that have complained about it for years.”

The new plan, by Mahan Rykiel Associates, Ayers Saint Gross and Ziger/Snead Architects, includes the same basic elements as an earlier plan: a landscaped plaza and a water feature on a two-acre triangular parcel at Pratt and Light streets.

In the new design, the water feature is a round fountain, which would be flush with ground plane or slightly depressed, and roughly in the center of the triangle.

The fountain would have jets of water shooting in the air, like the Walter Sondheim Jr. Fountain on the Inner Harbor’s west shore. The water could be turned off to make the area part of a larger gathering space or covered with an stage for events.

Around the perimeter of the fountain would be an inscription from McKeldin about rejuvenating the Inner Harbor. McKeldin is credited with proposing that the city revitalize the Inner Harbor during his mayoral inauguration speech in 1963.

Along with the circular fountain would be paved surfaces connecting the downtown business district with the Inner Harbor shoreline and a lawn that could be used for public gatherings. Close to Pratt Street, sunken stormwater management areas would contain plants native to the Chesapeake Bay region.

The new design features would replace certain elements of the previous design, including a linear pool and water curtain and a tilted lawn that would have risen up to 18 feet above street level. The tilted lawn and water wall drew sharp criticism for being cliche copies of projects found in other cities.

Architect Steve Ziger said using a circular form for the water feature helped create a memorial that was complete in the first phase.

“The idea is that it has a celebratory feel, a visionary feel,” he said. “The circle has a simplicity and a clarity, but it is a statement: This is my vision for the Inner Harbor.”

A second phase would connect the McKeldin parcel more directly to the Inner Harbor shoreline by relocating northbound Light Street traffic lanes that currently cut it off from the harbor and make it a traffic island.

The Phase Two design also calls for a rounded, brick-paved overlook projecting into the Inner Harbor as an extension of the existing amphitheater.

David Rubin, the landscape architect on the review panel, praised the new design. “I think this space has an elegant simplicity to it,” he said. “I think you are on to something.”

“There is something about the restorative nature of this that is informal. . . refreshing,” she said. “But I wonder if it will have a strong enough impact. It still needs to be a destination.”

Panel member Richard Burns said the design will only work if the traffic realignment works.

He said he is concerned that DOT hasn’t “signed off” on the concept of moving lanes and closing the northbound spur that takes Light Street traffic to Calvert and Pratt streets. 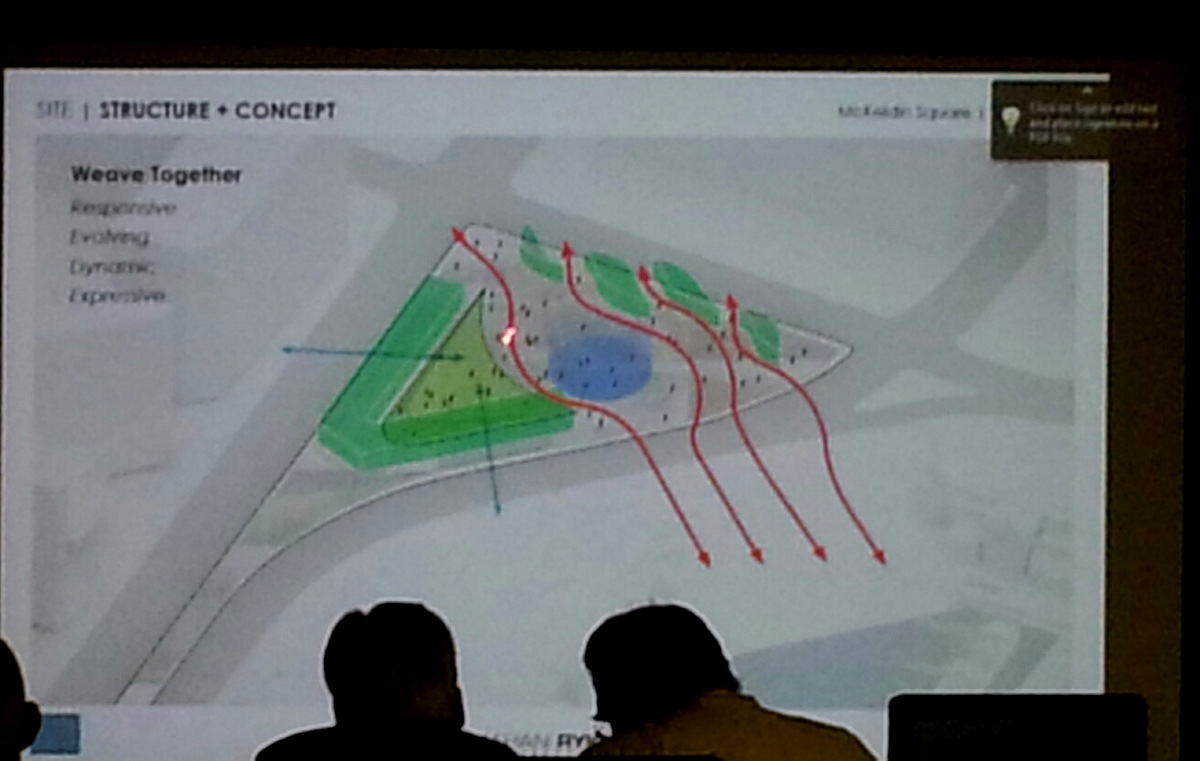 Flow of pedestrians across a new McKeldin Plaza presented to UDARP. Note the fountain (in blue) that would feature jets of water shooting in the air similar to the nearby Sondheim Fountain. (Downtown Partnership)

Burns also said he didn’t think the design was visionary enough, given the amount of money that would need to be spent to raze the existing fountain and build a replacement.

Burns compared the McKeldin Square project to the High Line in New York, where the city planned to tear down elevated train tracks in Lower Manhattan, but changed course after designers proposed turning the tracks into an elevated park.

The High Line is now one of the most popular attractions in the city and a catalyst for hundreds of millions of dollars worth of new development.

Can we Keep the Fountain?

Burns asked if something similar could happen with the McKeldin Plaza. “I wonder if we can keep the fountain and concentrate on programming that space so it is active and it is used,” Burns said.

“I’m concerned that that option was never considered. . . I wonder if we’re just giving up on McKeldin too prematurely.”

Two other panelists, Gary Bowden and David Haresign, said during the meeting that they wanted to withhold their comments. Haresign said after the meeting that he is not a fan of the existing fountain and supports the search for an “iconic” replacement that is right for Baltimore.

City Planning Director Tom Stosur said the lack of consensus among the panel members is a sign to him that the project needs more study.

“You have explored a lot of different ideas, and it is still not something that everyone can look at and say, ‘This is it.’ There is still more to be done,” Stosur told the designers.

Although the general public was not allowed to testify at yesterday’s meeting, more than a dozen architects and artists sat in the audience and listened to the presentation.

Another audience member was Jeremy Rountree, a member of Baltimore’s Public Art Commission.

He digitally distributed a letter before the meeting saying that the fountain is part of the city’s official inventory of public art, which is monitored by the commission, and that the commission also reviews new memorials such as the Inner Harbor statue honoring William Donald Schaefer.

Rountree said in his letter that he opposes demolition of the fountain and believes the Downtown Partnership’s plans are “offensive and wasteful of public monies.”

He acknowledged that the fountain is in “dire need of maintenance,” but said it can be made to look better. “With a modicum of investment, the fountain could return to be the jewel of the Inner Harbor.

Rountree said his comments represent his own views, not the views of the entire commission.

“The shenanigans surrounding the redevelopment plans should shock the conscious of any civic-minded resident,” he said. “Public monies are being spent to redevelop publicly owned lands which the public will continue to own; all without public input on the design, without a public contract, and without open meetings.

He said that the Downtown Partnership’s private meetings are not the same as open public meetings.

“Indeed, the Public Art Commission has repeatedly asked Downtown Partnership to share why demolition of public art is necessary and they have refused our invitations, instead seeking out preferential forums.”

Will Council Hold a Hearing?

Last July, City Council President Bernard C. “Jack” Young introduced a resolution calling for the city not to permit the Downtown Partnership to move ahead with demolition of the McKeldin Fountain until the city has approved a design for the replacement and funds are in place to build it.

No public hearing was ever held on the resolution, prompting some preservationists to fear that Young has dropped the matter, ending any plans for a City Council hearing on the subject.

Young’s spokesman, Lester Davis, said yesterday that the resolution has not been withdrawn.

He said the Council has been busy with other matters and that a public hearing on the fountain likely will be scheduled for sometime early next year.