Baltimore has landed on several “Top 10” lists at the start of 2016 for being the site of two demolitions: one a piece of civil rights history in Marble Hill in West Baltimore and the other a Brutalist style theater located downtown in Charles Center.

“A stunning and sudden loss” that “underscores the urgent need to survey these underrepresented resources – and identify strategies for their long term protection,” said Preservation Maryland, in a year-end roundup of preservation victories and losses, referring to the destruction of 1234 Druid Hill Avenue in Marble Hill.

In addition to Preservation Maryland’s report, the razing of the Marble Hill building was included on two national lists of “important buildings that were demolished in 2015” (Curbed, National Trust for Historic Preservation.)

Also decried by many was the destruction of the Morris A. Mechanic Theatre in Charles Center. 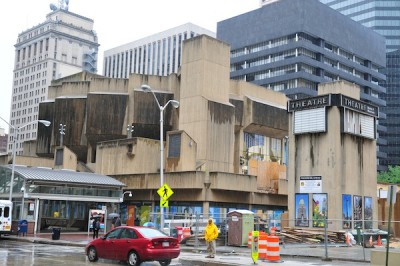 The Morris A. Mechanic Theatre. (Photo by Doug Birch)

“Recounting the details of how the city lost the Morris Mechanic is like reading through a tragedy that might have been performed there,” observed Kriston Capps, writing in a piece published by CityLab.

In both cases, the demolitions were singled out by preservationists who argued that they involved nationally significant buildings that shouldn’t have been torn down.

Both losses are likely to be part of the discussion at a Preservation Town Hall meeting today organized by Preservation Maryland. The meeting is free and open to the public and will be held starting at 6:30 p.m. at Church and Company, a restored church-turned-events venue operated by Alexander Fox at 3647 Falls Road in Hampden.

While preservationists mourned both losses, they notably came about in distinctly different ways. The Mechanic demolition occurred after a lengthy preservation battle, with the Downtown Partnership of Baltimore acting as a leading proponent of demolition.

The Freedom House came down with little warning and no public debate, with Bethel AME Church pastor Frank Reid ordering the demolition.

The National Trust for Historic Preservation, a non profit advocacy group that turns 50 this year, also included Freedom House on its “10 Preservation Wins and Losses in 2015” and discussed strategies that might have saved it.

“The house was just outside the boundaries of the Marble Hill Historic District,” the National Trust listing said, in part.

“Had the house been on the north side of Lanvale Street, rather than the south side, the church would have needed [approval from the city’s Commission for Historical and Architecture Preservation] before it could proceed with demolition. Preservationists are exploring ways to expand the Marble Hill boundaries to prevent other historically significant buildings from being razed,” the group said.

The Freedom House demolition also was noted by Curbed, a news site that covers real estate development around the country, on its year-end list of “10 Important Buildings We Lost in 2015.”

The Curbed list was compiled after consulting with representatives from the National Trust for Historic Preservation; Docomomo, (the international committee for documentation and conservation of buildings, sites and neighborhoods of the Modern movement), and its own editors.

In this listing, too, the editors noted that the building lacked landmark protection because it wasn’t part of a city-sanctioned historic district.

“A few blocks was all that may have separated this important civil rights landmark in Baltimore from preservation,” they said.

Looking to the future, Baltimore’s Commission for Historical and Architectural Preservation will hold a public hearing on January 12 to discuss efforts to protect another Marble Hill row house, 1232 Druid Hill Avenue, which the same church owns and wants to tear down.

Looking to the past, the CityLab piece describes how the city’s preservation mechanisms failed the Mechanic this way.

“Baltimore’s Commission for Historical and Architectural Preservation had hoped to landmark it several years back. At the same time, a developer proposed a plan that would have preserved 80 to 90 percent of the building’s exterior. Since the theatre wouldn’t change that much anyway, the city’s Planning Commission voted against the landmark designation—the first time it had rejected a landmark in 40 years. Later, those plans changed, and when they did, there was no circle of protection in place to preserve the building.”

Capps describes all the misguided demolitions of 2015 as a cautionary tale for cities.

“Haste makes waste. Moving too rapidly toward demolition has cost some communities irrevocable architectural wonders,” he wrote. “Some deserving projects were torn down for opportunities that have failed to materialize, or while other options were still on the table. Executives, mayors, and councilors should move more cautiously when significant architecture is at risk. Demolition should be a last resort for projects that matter.”