Reaction to the nearly $700 million West Baltimore redevelopment plan announced yesterday by Gov. Larry Hogan – including the demolition of about 4,000 properties over four years – was decidedly mixed.

Would it lift up struggling communities by eliminating blight? Or simply push out poor, African-American longtime residents, leaving vacant lots and lucrative opportunities for demolition contractors, developers and speculators?

This debate was taking place all over town yesterday after Hogan and Mayor Stephanie Rawlings-Blake announced the plan – and then watched workers claw down a vacant rowhouse in the 1000 block of North Stricker street, a few blocks from where Freddie Gray was arrested last April.

“More programs to knock down vacant houses and build ones nobody in the community can afford… Y’all bout to witness gentrification at its finest. Smh,” wrote Justin Green on her Facebook page.

“I agree that gentrification is an important issue but these are vacants. . . they need to be razed,” Quincey Gamble responded.

“They do but what about the residents currently living there?” Green said. “Did u hear any plans about working WITH them to ensure they remain/ can afford to stay in their neighborhoods once complete? No. They’ll be pushed out.”

“Yes, both the mayor and governor released information that a relocation program is in place in conjunction with this plan,” observed Jorge Mendez.

“Trust me, the developers/investors will get first dibs. . . after that, it’s a wrap. We seen this too many times before,” Green shot back, going on to recount the story of her grandparents’ relocation from a house located in town.

“Bought them and the whole neighborhood out of their houses in the city with the promise of rebuilding and that was eight years ago,” she wrote. “That whole block of houses still sitting as vacant as they were when they left.”

Under the Hogan Administration plan, dubbed Project CORE (Creating Opportunities for Renewal and Enterprise), about $75 million in state aid will go to demolition over four years with the city contributing another $19 million in “in-kind administrative services,” according to a news release.

The state estimates that approximately twenty city blocks can be completely cleared of blight in the first year, with the initial block to fall being 1000 block of North Stricker.

The Maryland Stadium Authority will oversee demolition projects jointly approved by the state and city.

An additional $600 million, through the Department of Housing and Community Development, was promised for redevelopment subsidies, including more than $150 million in 2016.

“Financing for quality development projects will be made over the next four years through a range of innovative programs and partnerships, including the Rental Assistance Demonstration program and the issuance of potentially $200 million in revenue bonds,” according to a release from Hogan’s office. 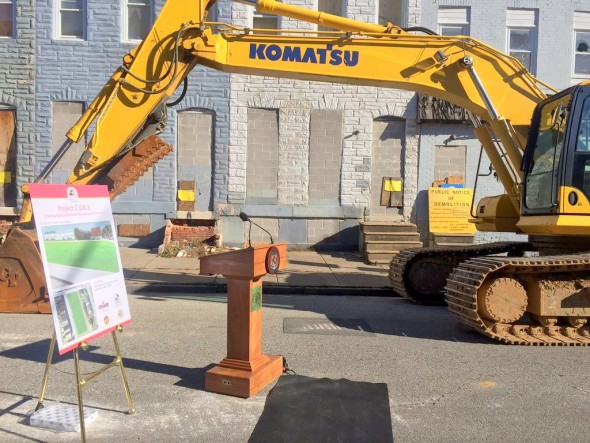 The 1000 block of North Stricker Street, the first part of Sandtown-Winchester to be demolished under the state-city initiative. (Photo credit: @MayorSRB)

State housing officials said the subsidies would go toward retail development and affordable, as well as market rate, housing.

Spending under the program is subject to approval by the City Council and the Maryland General Assembly.

Rawlings-Blake praised Hogan and said she had confidence that the project would be well-managed, noting that the Stadium Authority is also managing the city school reconstruction initiative.

Officials said some of the redevelopment opportunities for the razed properties would be offered through the Mayor’s Vacants to Value Program, an initiative singled out last year by a foundation report for exaggerating its modest accomplishments.

Depending on how they are defined, Baltimore’s stock of vacant houses stands roughly at either 16,000 or more than 40,000. The city says it has completed or begun demolition on 2,500 of them since V2V began five years ago.

Hogan said his redevelopment initiative is the remedy citizens were told him they wanted in the aftermath of the April rioting.

“As I walked the streets of this city, people were repeatedly calling out and begging us to do something about the blight that is all around them,” Hogan said. “We have heard your calls for action.”

Both city and state leaders will have to combat widespread cynicism from across the political spectrum as they push the plan forward against decades of disinvestment, racially divisive housing policies and projects such the demolition along the Route 40 corridor that displaced thousands and resulted in the so-called Highway to Nowhere.

Commenting on Facebook yesterday, Carol Ott, director of Housing Policy Watch, said she has “very serious concerns” about the plan.

“Who will be receiving the money? What kind of accountability is in place to ensure it’s spent wisely, and on actual work that benefits residents, and not ‘studies’ or the like?” wrote Ott, who has focused on the issue of blighted, slumlord-owned housing for years.

Echoing her was Raymond A. Winbush, director of the Institute for Urban Research at Morgan State University.

“How will this ‘development’ look,” Winbush asked, “and is this just an opening for massive gentrification?”

Sen. Bill Ferguson said he was “proud to stand with Hogan,” noting that “I’ve certainly had my criticisms of the Hogan Administration.”

But Ferguson said this help from Annapolis would benefit Baltimore residents.

“This is a great start for new investment in the City, and the bipartisan support from the Governor makes a big difference,” Ferguson said to his Facebook followers.

Others, meanwhile, questioned the destruction of Baltimore’s old housing stock and said the Red Line project would have been a better way to uplift struggling West Baltimore.

“We’re tearing down quality historic structures that could be rehabbed leaving empty fields that may or may not eventually be developed with likely low-quality dime-a-dozen stick-built buildings that will fall apart in 30 years,” wrote Jed Weeks, of the advocacy group Bikemore.

“But hey I guess let’s celebrate $700 million to tear down our city instead of $700 million for transit infrastructure that could have led to reinvestment in existing structures,” he concluded.

“People Have Been Broken”

Contemplating the massive financial investment Hogan is promising the city, Mark Parker, pastor of Breath of God Lutheran Church, wrote on Facebook, “I should be happier than I am.”

“They become blighted, he continued, “because people are first and foremost what have been broken in Baltimore. Grassy fields and shiny new buildings don’t by themselves help people overcome their addictions, get a job, have transportation to work, deal with systemic racism, or succeed in school.”

Parker said he was troubled by Hogan’s phrasing yesterday.

“Fixing what is broken in Baltimore requires that we address the sea of abandoned, dilapidated buildings infecting entire neighborhoods,” Hogan had said to the assembled media, standing in front of boarded up rowhouses, with the demolition crew poised. “Together, we will transform these neighborhoods from centers for crime and drugs, to places our city, and our entire state, can be proud of.”

In the end, Parker concluded his comments on a hopeful note.

“Maybe I’m reacting too strongly to his words,” he said. “It’s the details of the program that matter. I’m open to seeing good in this, and hopeful that as the ideas become real initiatives they will wind up focusing on people as much, if not more, than on structures.”