There is a Maryland group that always meets on the Saturday before Martin Luther King Junior’s birthday in Wyman Park to celebrate the January birthdays of Confederate leaders Robert E. Lee and Stonewall Jackson, who have a monument there.

And there is a separate group of Quakers who meet at the same time and location to stand in silent protest of the first group’s meeting.

This year may be the last for the ritual, if Mayor Stephanie Rawlings-Blake follows the recommendations of a commission formed to suggest what to do with Baltimore’s four city-owned monuments associated with the Confederacy.

The seven member panel voted today to “de-accession” two of the monuments, including the Lee and Jackson monument in Wyman Park. The other one that would be de-accessioned is the Roger B. Taney monument in Mount Vernon Place.

They discussed offering the Taney statue to an organization in Frederick, Md., but said they don’t feel strongly about where it ends up.

For two others, “context”

Panel members recommended that the city keep two other monuments where they are but add “context” or otherwise activate the sites in ways that enable viewers to understand them from a contemporary perspective. 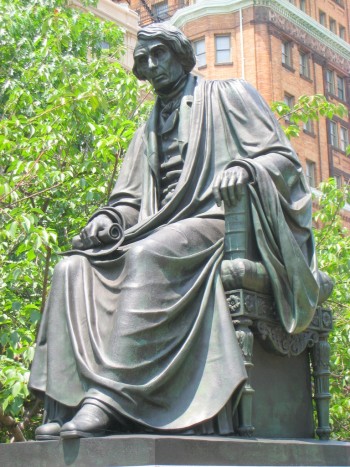 The monuments that would stay in place are the Confederate Soldiers and Sailors Monument in Bolton Hill and the Confederate Women of Maryland Monument near University Parkway and Charles Street.

The panel asked that the additional context not just be a plaque that could be overlooked. They said they wanted the sites to be altered in meaningful and noticeable ways that would help viewers understand what they are seeing. They suggested that the city work with museums, artists and others to “contextualize” the two monuments.

Commissioner Larry Gibson offered possible wording he would like to see placed on the monuments that are retained.

“After the War, supporters of the Confederacy, in a movement they called “The Lost Cause,” erected monuments like this one, to honor Confederate soldiers and sailors and to promote their views about the causes and events of the Civil War.”

The recommendations came at the end of the final public meeting scheduled by the commission, which Rawlings-Blake created last June.

The panel is expected to send a report of its recommendations to the mayor within six weeks. The mayor will then make the final decision about what to do with the monuments.