How would the group planning to memorialize Divine –  at the spot where the Baltimore-born actor filmed the daringly disgusting final scene in John Waters’ “Pink Flamingos” – do it?

Tastefully, but not too tastefully, is the short answer.

Local artists planning a memorial to the actor known as Divine went a long way toward realizing their goal this week when they launched a website (divinemonument.com) showing a proposed design for their project.

By the end of the month, the group plans to begin a Kickstarter campaign to help raise the estimated $50,000 to $100,000 needed to make it a reality.

“We think Divine would like it,” said Michal Makarovich, one of eight people who have been planning the memorial since early last year. “Baltimore will have a monument like no other in the world.”

“We could have had a statue, but it wouldn’t have been as noteworthy, to make people want to come and see it and feel like they’ve done something adventuresome. “Have you seen the Divine monument?’ As John Waters once said, Come to Baltimore and be shocked!”

The Divine devotees went public with their project last year during a presentation to Baltimore’s Public Art Commission.

At the time, they said they wanted to create a monument to pay tribute to filmmaker John Waters and the late Harris Glenn Milstead, also known as Divine, a 300-pound transvestite who gained fame starring in Waters’ films. And they wanted to put the monument at the site of one of Divine’s best known scenes, the intersection of Read and Tyson streets in Baltimore’s Mount Vernon historic district.

That’s where Divine filmed the sequence that brought him and Waters international recognition – the closing scene in Pink Flamingos, where a triumphant Divine, having vanquished his rivals for the title of “Filthiest Person Alive,” gets down on the sidewalk and eats fresh dog droppings. 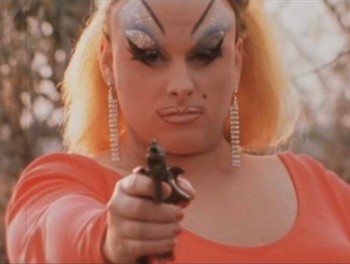 The monument planners said many John Waters fans come to Baltimore and want to know where the scene was filmed. Part of the monument’s purpose, they said, is to show the location so people can see for themselves. They also wanted a monument that will pay tribute to the actor, who died in 1988.

“I am appalled,” said arts panel member Elissa Blount-Moorhead, “that it hasn’t happened before.”

But how to convey all that? Especially at a time when Baltimore was reeling from riots following the death of Freddie Gray in police custody and debating what to do with its Confederate monuments?

Hess and Martorana, the artists for the monument, are two of Maryland’s most gifted sculptors. Hess has created a number of large scale sculptures for the American Visionary Art Museum, the Inner Harbor and other prominent sites.

Martorana is known for recreating everyday and even mundane objects such as bath towels out of marble and was featured last year in Walters Art Museum exhibit. He’s currently working on a down jacket in marble.

In discussing their concept with the arts panel last year, the group didn’t show a design. Members just said they wanted to create a sort of “shrine” that would fit in with the historic buildings of Mount Vernon yet reflect some of the counter culture spirit of Read Street, once Baltimore’s answer to San Francisco’s Haight Asbury district.

Waters knows about the project but is not part of the group planning it. He told The Brew last fall, before the design was unveiled, that he is busy with other projects and would not be able to lobby for it, but he doesn’t object to the concept.

The artists’ design starts with a marble archway, three feet wide and seven feet high, reminiscent of those found on entrances to any number of Baltimore’s grand Victorian town houses but in this case attached to the side of a building at Read and Tyson. (The building is owned by Pugh, one of the planners, who bought it without knowing of its Divine connection.)

At the top of the arch is a single word, “DIVINE.” Inside the arch is a black and white image of Divine’s face on black granite, looking fierce. It’s blown up from a photograph taken when Divine was in his early 30s, the age when he filmed “Pink Flamingos.”

If the arch is a doorway into Divine’s world, the artists have also provided a place to stop and contemplate that world. It comes in the form of two white marble steps, similar to those found in row house neighborhoods all over Baltimore. The steps are just below the arch and lead up to it.

Martorana has used recycled marble steps in his work before. These steps double as a platform to display a small bronze sculpture by Hess representing what Divine ate on his way to international cult status. Visitors may have to look twice before they realize what it is – and that it isn’t real.

Below Divine’s visage is a quote from John Waters about the day they shot the dog-doo scene: “It was a magic day in our happy young lives.” Engraved below Waters’ quote, in smaller letters, is a sentence that explains the reason for the monument’s location: “Divine was directed here by John Waters for the last scene of Pink Flamingos in 1971.”

The art work doesn’t reveal the exact spot where the eating occurred. “We’re calling it the location, not the spot,” Makarovich said. There are already several on-line videos that make educated guesses about the exact spot.

The result is a work of art that is both specific and vague to the point of being mystical.

The overall piece is general and accessible, aimed for the crowd that just wants to take a selfie with it and doesn’t care so much about the fine print.

The engraving and other details will provide a few more specifics for hard core fans who make a trek to the site and want to be rewarded with some information that makes them an authority on the subject, so they can prove they were there. 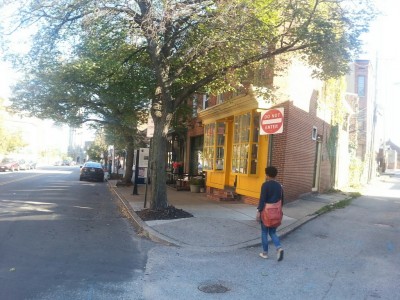 Notorious scene in Pink Flamingos was filmed somewhere near the corner of Read and Tyson streets. (Photo by Ed Gunts.)

The steps also double as a place where people could sit or kneel or otherwise linger and pay tribute, Makarovich said.

“When people get there, there should be something for them to see and take pictures of,” he said. “That was the impulse.”

The planners debated whether to include the dog excrement sculpture at all, but they eventually decided it needed to be part of the composition.

“If we did it without the doggy-doo, it wouldn’t have any controversy. That, and the fact that it’s located where the scene was filmed, adds even more interest to make you want to go see it,” Makarovich said.

The exact size of the dog-do sculpture is still being determined, especially since the amount in the movie was actually fairly minimal.

“It’s under consideration,” he said. “The artist may take liberties with it.”

The group will need construction approvals to install the shrine. The Kickstarter campaign gives groups 30 days to raise the funds they need.

Makarovich said a final fundraising goal has not been set but it likely will be between $50,000 and $100,000. He is optimistic that the crowd-funding effort will succeed.

Makarovich said the group is counting on small contributions from Divine and Waters fans around the world to help pay for it. He notes that some websites devoted to Divine have more than 150,000 members or subscribers.

“If each one gave just 50 cents, we’d practically have it paid for,” he said.

Makarovich said the group is hoping to obtain the funding and construction approvals in time to complete and install the project by summer, perhaps in time for Artscape. He said the group hopes to celebrate the project’s completion with a Read Street Festival, just like the city used to have in the early 1970s, when “Pink Flamingos” was released.

And it doesn’t stop there.

The group is already thinking about honoring other Baltimore natives. Makarovich said he’d like to see a statue of Madalyn Murray O’Hair, the Baltimore atheist who got prayer taken out of the classroom, or the singer Cab Calloway.