People cheered and chanted “this is what democracy looks like!” as they stood today in front of Baltimore’s memorial honoring Confederate generals Robert E. Lee and Stonewall Jackson, recommended for removal by a panel this week.

Some whooped and laughed as they dropped pictures of Lee and Jackson into a toilet festooned with media business cards, a smiley face sticker and a copy of the U.S. Constitution. Each photo was set on fire, to the delight of the crowd.

Standing across Art Museum Drive from the celebration was a woman who has led a quieter protest at the spot. Ann Kehinde lives across the street from the Lee-Jackson sculpture, which is on city-owned land in Wyman Park Dell.

For the past four years, Kehinde and other Quakers have gathered in silent protest of a celebration of Lee and Jackson that the local chapter of the Sons of Confederate Veterans (SCV) has been holding at the statue since 1987 – traditionally on the Saturday before the Martin Luther King Day holiday, first observed in the U.S. in 1986.

The Quakers’ modest position: that the SCV’s celebration of the generals and the pro-slavery, pro-secession Confederacy – observed by many of them wearing Confederate regalia – should be held on a different day, out of respect for Dr. King. 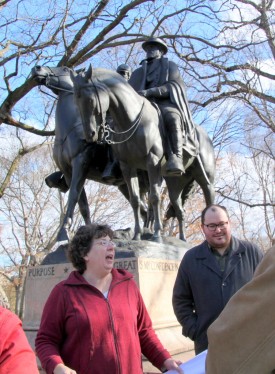 The SCV group has refused, saying they are not dissing the slain civil rights leader but honoring the birthdays of Lee and Jackson, which fall four and six days after King’s.

But now, in a dramatic shift in the long-running battle, it appears there may be no Lee-Jackson statue at all in that spot, if the city follows the recommendation of Mayor Stephanie Rawlings-Blake’s Special Commission to Review Baltimore’s Confederate Monuments.

“If that were to happen, it would be wonderful,” Kehinde said, after leaving the Quakers’ traditional vigil spot in the median to talk with the other protesters, gathered beside the statue itself.

“Living across the street and as a member of a multi-racial family,” she said, “this has been a daily reminder of what African-Americans have had to endure and still endure in this country – of how much we still have to do on this.”

Was the crowd of about 70 people, organized by the Stony Run Friends in the median and Baltimore Bloc and others across the street, celebrating too soon?

The city staffer assigned to the monuments commission has cautioned that, despite Thursday’s vote to move the Lee-Jackson and Roger B. Taney statues from city property, the panel’s final advice to the mayor and her ultimate decision might be different.

“In the end, any ‘decisions’ reached [Thursday] can only hint at [the] direction that the recommendations may go in their final report,” said Ryan Patterson, coordinator of the city’s Public Art Commission, in comments online following Thursday’s vote. 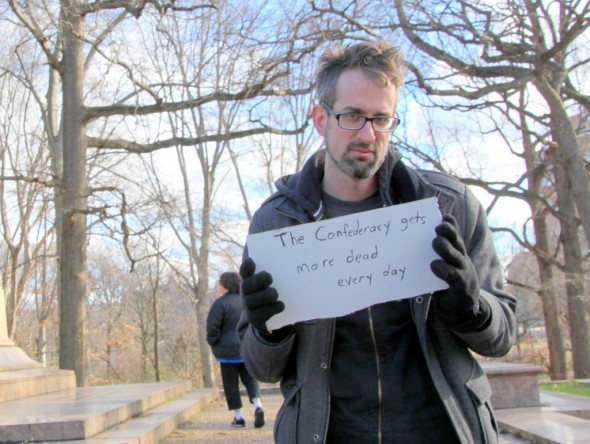 One sentiment expressed today at the Jackson-Lee statue. (Photo by Fern Shen)

That voting session came after the commission, created by Rawlings-Blake in June, held multiple public hearings on the issue.

“[Their] report is yet to be written and will then still need to reviewed by the Mayor and vetted for feasibility by staff and legal counsel,” Patterson said.

Still, for the activists who gathered next to the statue, there was already one victory – the Confederate group was not there. Aside from reportedly two people who came with a wreath and were turned away by the protesters, no one from the group showed up.

What might have been a confrontation (several Baltimore city police officers were on hand, just in case) turned into a victory lap for an assortment of city activists and civil rights leaders.

“We’re calling on people to take a stand – and this has been an example of what can happen when people do that,” said longtime activist Bettty Garman Robinson, of the Showing up for Social Justice initiative.

Duane “Shorty” Davis, the artist-activist who brought the toilet, called on the group to gather for a photo, saying “This is Baltimore’s version of ‘Do the right thing!’”

As people threw the burning photos into the toilet, Davis wasn’t mincing words: “We put s___ where it belongs.” 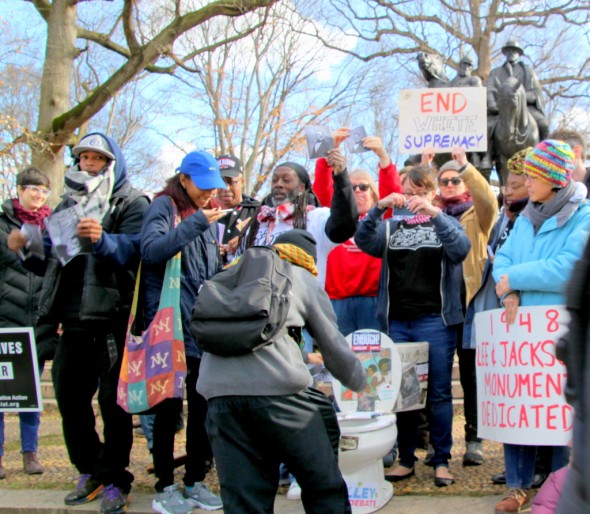 Duane Davis and others burn photos of Lee, Jackson and Taney. (Photo by Fern Shen)

Marvin l. “Doc Cheatham, former head of the Balitmore chapter of the NAACP and currently president of the Matthew A. Henson Community Association, urged the city to act on the commission’s recommendation.

“The Confederacy is a lost cause. They were wrong and we should not be honoring them,” Cheatham said. “This monument should not be on city property. Period.”

Selena Tan said she went to one of the meetings the commission held and was struck by the testimony of a people of color “that convinced me that signage to contextualize the monuments is not effective.”

“This one woman spoke and said, ‘My grandparents never agreed that this statue should be put up in their city – they were never given the chance they had no voice,’” said Tan, who praised the commission. “They did a very good job.” 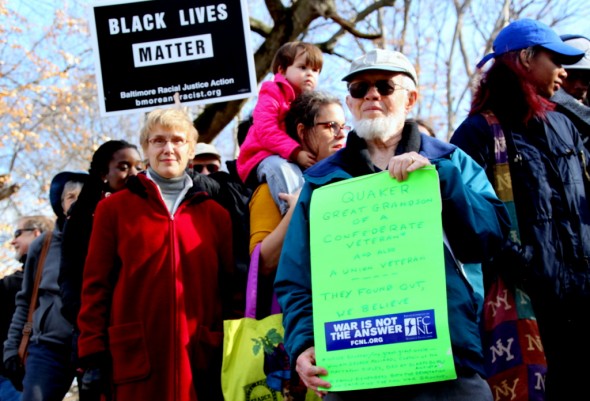 Family history brought Bob Fetter to the monument this day. He held a sign that said he is the great-grandson of a confederate veteran and also a union veteran.

“They found out, we believe, war is not the answer,” his sign said. He went on to recall learning as a 9-year-old how his great-great uncle died at Sharpsburg/Antietam. “I never forgot that. You get the whole tragedy of war there in our family.”

As for Kehinde, she says the monument is less about Civil War history and more the result of recent history, when northern whites felt threatened by African-Americans.

“It was dedicated in 1948,” she said, “and it had everything to do with putting blacks in their place.”

The encounters between anti-monument activists and other people who came (a couple with a wreath and man who came on his own) were not witnessed by The Brew but people who were there said the couple was blocked from laying their wreath near the statue.

“Then they tried to leave it by the edge of the Monument but Anti-Racists kept knocking it over & throwing it away,” @BmoreBloc, an organizer of the event, tweeted.

Activists said they “escorted” the couple from the area.

Below are photos and comments the group posted on Twitter yesterday that provide their description of what happened. Anyone with other accounts of what happened or video or photos or comments on what transpired is welcome to post them on this story. 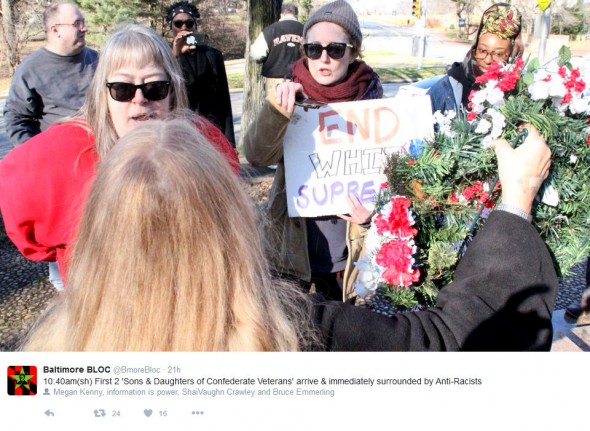 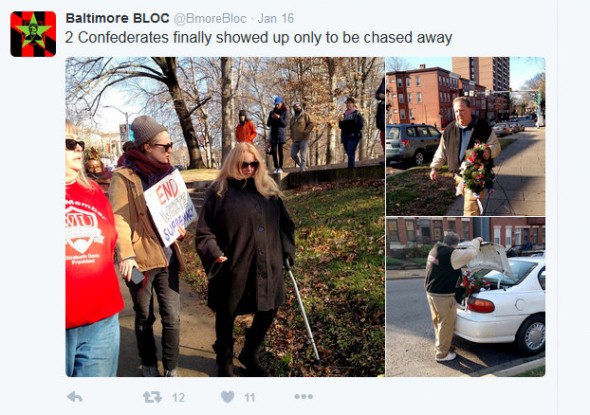 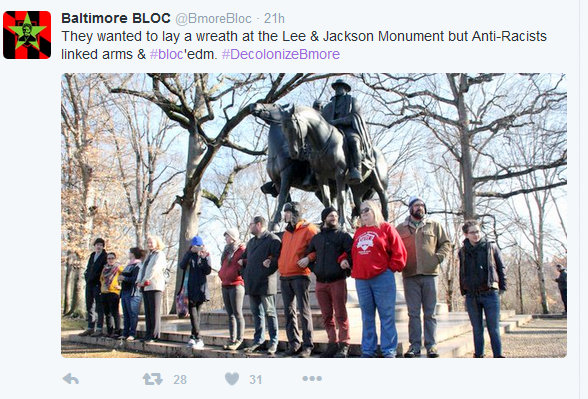 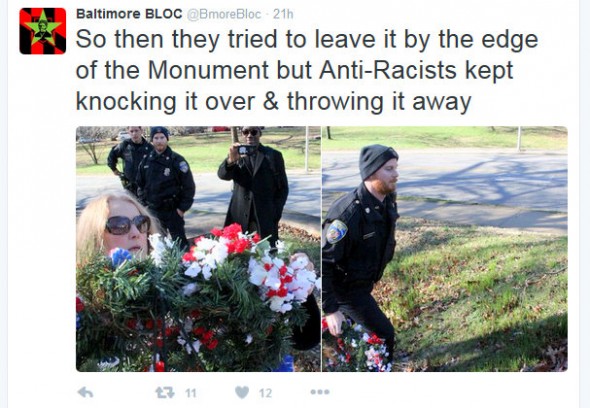 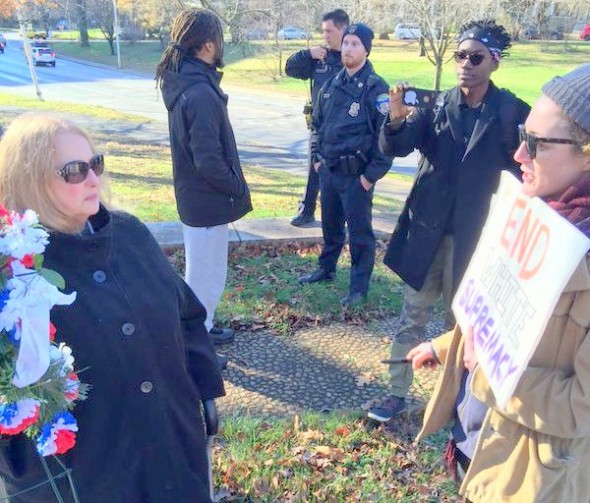 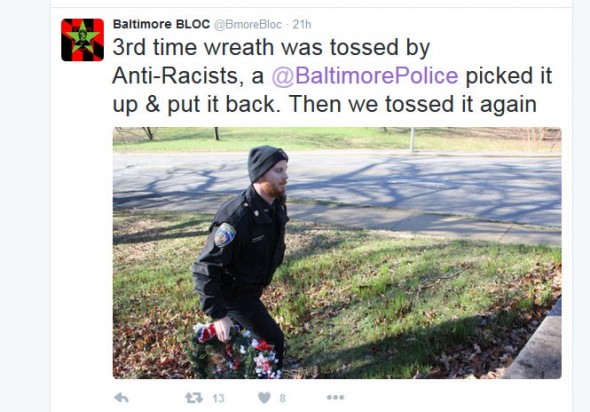 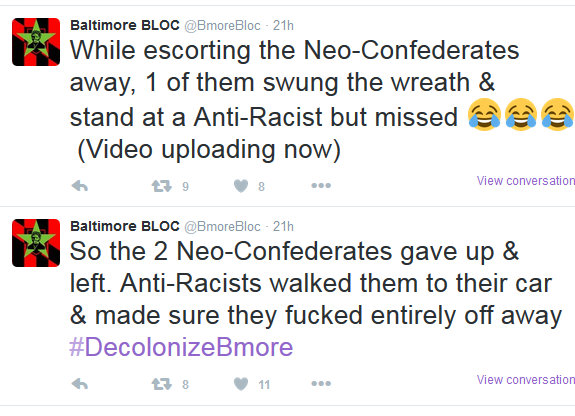 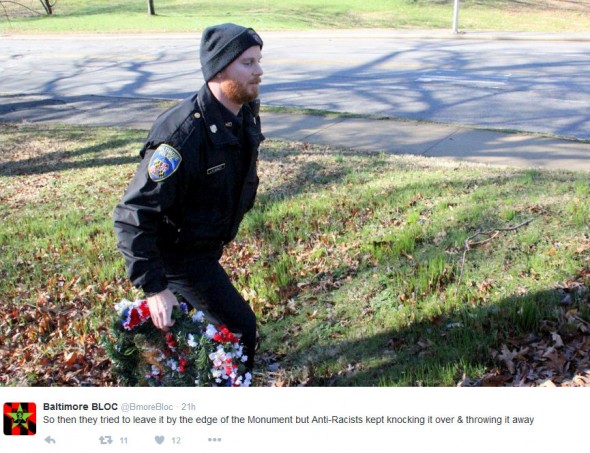